Some of you out there (@Rumiho, @Chikolad, @AuPG, others…) seem to be using non-Latin scripts for your music. Japanese, Hebrew, Thai, etc.

I’d like some input on what we should do for sorting, searching, and identification.

I find it annoying that I have Sergei Rachmaninoff and Серге́й Рахма́нинов, but I don’t know how to resolve the situation.

If you could have anything you wanted, what would you like to see improved related to these other scripts?

I know Thai needs some orbitals rendering help, but I’m talking about the transliteration, identity, and ordering issues here.

I’d like the option to manually search for an artist in your database, and to link specific album performers to that person/group.

It would also solve my issue with currently not being able to force non-identified artists (like “Bush, Kate”) onto “Kate Bush”.

@dpstjp – does identify album not work for this purpose?

I presume you’re talking about Kate Bush, not Sergei?

Not for bootlegs, no.

It would also allow us to manually correct mistakes made in the database until you manage to get Rovi to pull its socks up. Plenty of people have complained about the wrong artist being identified in Roon. The ability to manually search (in the same way that we can do for albums) for an artist and to select the right ones out of a list of similarly named artists would be great.

I’d like an option to have everything sorted by the “album artist” tag as that’s how I deal with non latin characters in my library. Identifying by the Japanese artist name is fine as long as I can still search by the album artist tags. Ideally though it would be nice to have it display as the romanji album artist tags. For example here is a screenshot of how iTunes displays an artist with a Japanese name and my tags (Ai Otsuka / 大塚愛) 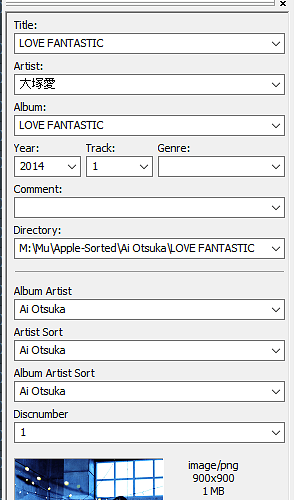 The artist I search to find the artist is “Ai Otsuka” but the artist in the tags is “大塚愛” which also is what gets scrobbled to last.fm.

@Rumiho: Is that not what you are seeing happen on the Album Browser now? The Album Artist is the sort key when you “Sort by Artist”.

But this only resolves the case of Albums, not of Artists. They can be quite different.

I guess somewhat but it has the other issue you mentioned of the latin and non latin artist split so as is it looks nice until I click an album. In the case of the “Artist browser” maybe have a sort by "album artist (tag) " like the “album browser” or the even by the “artist sort tag”.

It’s not a problem for Thai because I’ve never seen such a transliteration in any metadata before. Also there is no fix rule about how to transliterate. If it happens in the future, we will end up having a number of variations.

Similarly, I do have a problem with multiple artist names i.e. “Teresa Teng” also known as “鄧麗君” or “邓丽君”. It would be nice if I can manually link them all together and make one of them primary. Then she can be identified by any name but ordering by primary name.

The main problem I’m having is with a lot of Hebrew albums getting English metadata. The artist names are transliterated and the album/track names are sometimes transliterated and sometimes just translated. In the past (70’s/80’s) it was also common for Hebrew albums to contain the track listing in translated English. But I like to have everything in Hebrew for Hebrew albums.
When I notice such an album I will try to reidentify it to see if there’s a Hebrew version of it in the DB. In most cases there isn’t, and I revert to file tags. It’s not that much different from using the DB data because there are never any lyrics, liner notes or Rovi album reviews in the DB anyway for Israeli music. It would be great if there was. Maybe give us a way to contribute to the DB ourselves? Something like a 4th layer. That way the users can fill out missing metadata and share with other users and everyone benefit. Of course there would need to be moderation of some sort that will prevent someone from ruining metadata for others. I know that’s a lot to ask for, but I’m not sure where that metadata should come from normally. Is it from the record companies? I can tell you that even in Tidal there are more Israeli artists shown in English than there are in Hebrew, and that comes from the record companies…

I am Korean, and for now being able to just read Korean Characters on my IPad would be one in a million! However, for sorting purposes, Korean should be easy. Korean characters (Hangul) consists of 14 consonants and 10 vowels, and just need to worry about consonants only when it comes to sorting.

I don’t exactly understand the technical side, but I think Roon just need to import Korean Characters as is from the original file, and use whatever sorting logic used by any operating systems.