Lately, I’ve noticed that underneath the song titles on a bunch of random albums there’s a new line of text describing the format of each song. I’d never noticed this before, and overall, it’s only happening in a small % of my library.

Looking more closely, it seems that each of the albums where it’s happening is being described as a “Mixed Track Formats” album by Roon. They’re being listed that way, but they’re not mixed-format albums. They’re all ALACs, with consistent bit depths and sample rates within any given album.

What seems to be causing the “mixed formats” thing is that certain songs have a format listed like this:

The specific MQA format listed varies from song to song. But the thing is, none of these are MQA files. They seem to have labeled as such randomly by Roon. (Also, how can a file have two formats?) 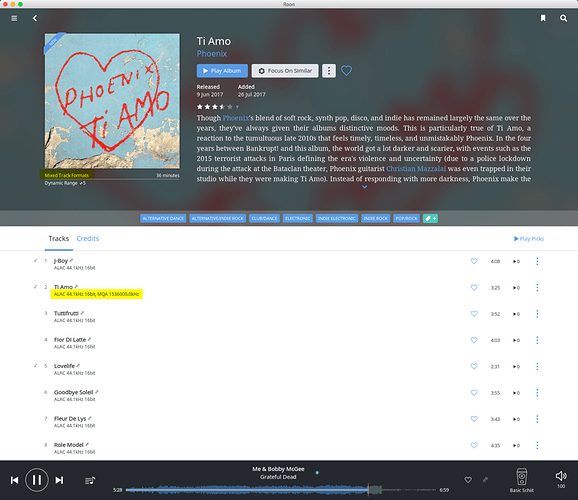 Does anybody know what’s going on here? Is there something about MQA I don’t understand?

EDIT: I’ve now seen all the posts about this being a known bug. Do we know anything about timing for a fix?

My setup is as follows: Roon Core: Windows 10 Pro running on an Intel NUC6i7KYK with 16GB of RAM and 500GB Crucial M.2 SSD Roon Control: Windows 10 Pro running on Corei7 4790K with 32GB of RAM and 256 GB Corsair SSD. Music: Stored on a Synology DS1515 on a pair of 4TB WD Red drives in RAID 1 configuration. I recently ripped a CD (No Doubt - Rocksteady) using dBpoweramp’s CD Ripper. I added the album to Roon without any issues, but it incorrectly identifies one of the tracks (Track 9 - Ru…