Nonsense review from a critic

The review is biased claptrap written by somebody who seems to have lost their critical faculties and just wanted to ‘bitch’.

So - what process does Roon follow to filter out poor reviews?

Why are people getting so bent out of shape around some of these reviews? Are they so thin skinned (not aimed at the OP specifically, gulp!), that they can’t appreciate other people might have a considerably different opinion than them about a CD?

That’s the whole thing about critics and reviews, surely? And why should Roon be filtering them?

If you don’t want to read reviews at all, I’d even go as far as to suggest Roon isn’t a great fit for you, given that a large element of its USP revolves around them. But this is just my opinion.

Reviews are obviously personal opinion. However, Roon is selecting which reviews to show up. In addition, a review is worthless if it is not based on objective consideration of the performance.
If, as you state, the USP of Roon is largely based on reviews, then more time should be spent presenting alternative (and perhaps better supported) reviews.
In general, musical criticism should be based on an understanding of the work and not (as was the case with the referenced review) some teenage level strop! If I am paying for this USP, then I would like to receive higher quality reviews.

This is all in your opinion though. There are tens of thousands of reviews that Roon pulls from AMG. If they ALL chimed with your view of what constitutes ‘a good review’, the chances are that somone else would be hacked off.

I just don’t understand why you can’t see this.

Errr…because rubbish is rubbish?! You really are adopting a rather silly viewpoint. According to you, any opinion is worthy of publishing. This is patently not the case.

LOL, I’m taking the pragmatic approach that out of tens of thousands of reviews there will be some I profoundly disagree with - for all sorts of reasons. Some are likely to be ‘rubbish’ in my opinion. I can deal with it.

You are being an absolutist. 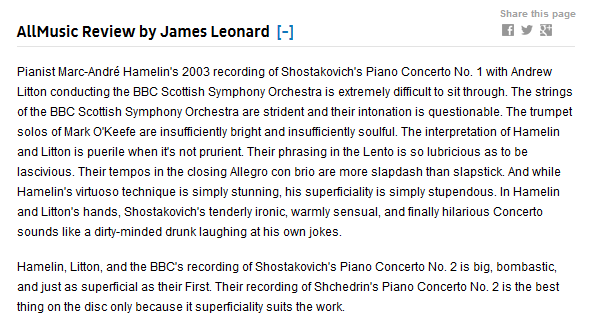 That’s enough to make me want to go and listen to it.

But maybe that’s just me

Good luck finding it through Roon. I still haven’t found the magic set of search terms to actually display it. Now that is something worthy of discussion.

I was curious about the review you referenced in your posting. I did read it on another site and agree that it does not represent the majority view of listeners or professional critics. I am not sure how roon could offer a second opinion on their site. I found another review much more informative. The reviewer is Philip Gold on the Enjoy the Music website.

How about as a feature request, that it’s possible for Roon users to add their own reviews, which are stored ‘in the cloud’ at Roon. Then anyone who adds that album to their database, will get an option to turn on/off ‘Roon Reviews’. in the GUI, to perhaps get multiple opinions on a particular work. In this case you could counter this review, with what you actually think. For me, I like to read the good and the bad. Because that’s real life

Reminds me of the old Fanfare magazine, which you both loved and loved to hate.