Not a great start!

Just downloaded for the Mac. On opening the application, I am asked to choose my music folder. I pick one with about 10 albums in it as a test, and click OK. I am then returned to the previous screen - I click “next”, but nothing happens. The “choose a folder” box is flashing a bit. Click next again, nothing happens. Eventually I am taken to the next screen, where it says “TIDAL - et all t e music in t e world i fidelity ry it free for days” (sic). I have the option to “TRY TI AL FREE” or to login to TIDAL with my details. No option to skip - at least it’s not appearing on my screen. Do I HAVE to sign to TIDAL to get into Roon??

In fact all text in Roon seems to be broken like that; I went to “About Roon” and got this: 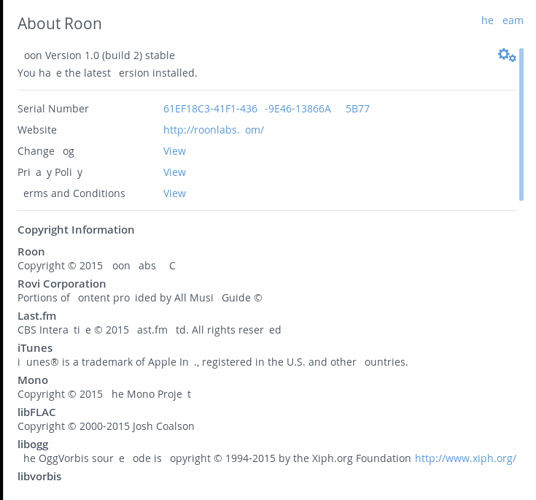 oh no… there is a no thanks button below the tidal, but it looks like there is an issue with video memory

you can try to restart the app. the app is pretty graphics heavy. some people say their intel HD graphics gets stuck like this, but a reconnect from our app to the driver fixes it.

what type of machine is this? ram/video?

weird… i have one almost exactly like that sitting here, and one of our core developers has the same thing, but 1 year older.

ok, so let’s see what’s taking up all your video memory… what other apps do you have running? have you rebooted recently? (im not asking you to close or reboot, just want info)

I ran “memory clean” which increased my free RAM from around 3.5GB to 4.5GB, and I didn’t add any network folders to Roon, and it started up OK and looked OK. However, I went to preferences and tried to add another folder, though one of the boxes was flashing again. I exited this menu, and the problem with missing characters reappeared.

Pages, preview, messages, Yep and Safari running as far as I can tell. Haven’t done a reboot in a day or two.

According to “memory clean”, I have 3.78GB of “free memory available” right now - which I would have thought was enough for Roon?

Your free ram is more than enough… id be surprised if that was it.

There is something going on with video memory… I hate to ask you to reboot, but could you give it a shot? I’ve heard of this before, but it’s not very common. Because it’s not so common, I’ve been having trouble tracking it down.

Restarted, and tried to add a network folder but the same problem with the flashing button and nothing else happening. I wonder if it’s because my NAS was automatically remounted as AFP after my restart. I’ll try and change it back to SMB and see what happens.

Wait, what happened to your graphics post-reboot? are all your characters missing?

Remounted the NAS as SMB. Tried to add a folder in Roon. Same problem - parts of the window where I add folders just quickly flashes. I wonder if the flashing indicates albums being added. When I return to the settings screen, the folder I selected to add isn’t there, however. And the same problem with the missing letters.

Thanks for help so far. Problem persists, but I have to sleep - I’ll pursue it again tomorrow, cheers.

Hey @extracampie, when you’re around again let’s have you submit some logs and we’ll take a look on our end.

From the sidebar in Roon go to Support, click the ‘I’ve already talked to support’ tab, then enter the support ID below in the empty field, and press Send.

You should get a confirmation that the package was sent, and we’ll be able to take a look at your logs over here.

Thanks Kevin. Today I did two things - I stopped my NAS auto-mounting as AFP and mounted it as SMB, and I disabled my VPN. Roon seems to be working OK now!

Wow, unsure what your VPN had to do with graphics, but I’m glad you got it sorted.