The Rock server is connected to my Netgear GS208 switch, which is connected to my Asus RT-N66U router.
Also connected to the switch are two endpoints, i.e. two Bricasti M5 network players, one for my study and one for the living room, so 2 different zones.
My iPad mini 4 is the control point.

Both M5s have a different IP address and different name in my network.
However, only one M5 at a time is recognized by Roon Core. Each of them can play separately in my network connected to Roon Core, but not simultaneously as 2 different zones.
I have tried static IP addresses as well, but it makes no difference.

I first switch on the one in my study, called “Bricasti M5”, it connects to Roon Core and music plays.
If I then switch on the second Bricasti M5 in the living room, called “M5 Living”, and it connects to Roon Core, the Roon app on my iPad gives me the following message: “Roon: an audio file is loading slowly, this may indicate a hardware or software problem”, and the app starts skipping tracks (although the music keeps playing normally) and I see the second M5 with different IP in the app briefly, but the first M5 is gone. So, I close the app and reopen the app, everything is normal again, the music is still playing and I only see the first Bricasti M5 that I started up first in the Roon app. The second Bricasti M5 never shows.

It is as if Roon Core sees them as one and the same player when trying to start up the second M5 and gives an error message.
Roon always only sees one Bricasti M5 at a time and takes on the name of the last M5 played in the Roon app.

@support How can I make Roon recognize the two Bricasti M5s as different players in my network, so they can both play at the same time in 2 different zones?

Don’t know what is means when a device is ‘Roon ready’. If it simply means that device ships with Roon bridge installed then this is a similar problem -

Can only see one USBridge at a time [Solved, cloned DietPi] Support

I have a Roon core running on Ubuntu on an Intel NUC, and several Allo USBridge endpoints each running DietPi and connected to a Modi 2 DAC. If I only power up one USBridge at a time, each of them works correctly. But if I power up more than one, I can only see one of them, and even the one I see frequently won’t play (just skips to the next track repeatedly). Unplugging the second one allows the first to work reliably again. When there are 2 USBridges powered up, I can ssh into both of them at…

Similar symptom, but different cause (one should hope): Roon Core should be able to sort out the various RoonReady devices fine. (The link above points to a case where a generic Roon Bridge install was cloned and where two devices presented themselves to Roon Core with the same unique_id).

Let’s flag @support to follow up. In the mean time, can you provide a screenshot of the two Bricasti’s when they’re visible in Settings > Audio, like this: 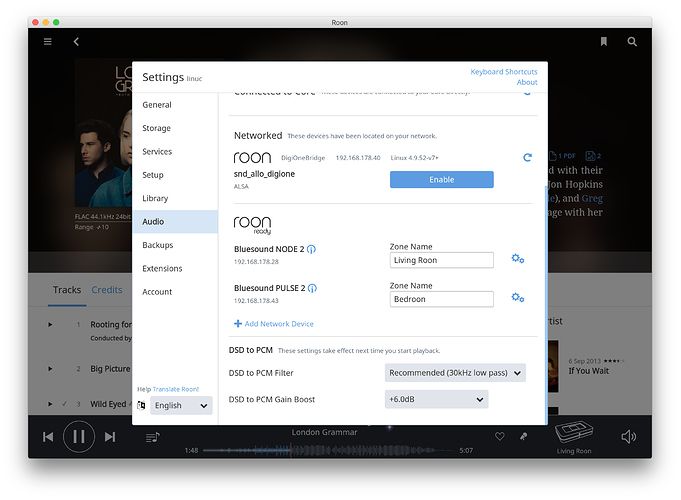 A screencap of your audio path while playing could be handy as well: 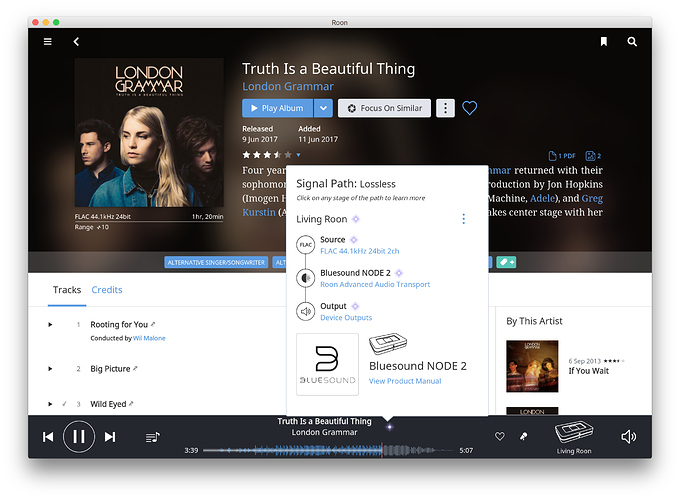 The two Bricasti M5 players never show up both at the same time in the Roon app. I can only see one at a time, the one that I started first.

Here are the screenshots: 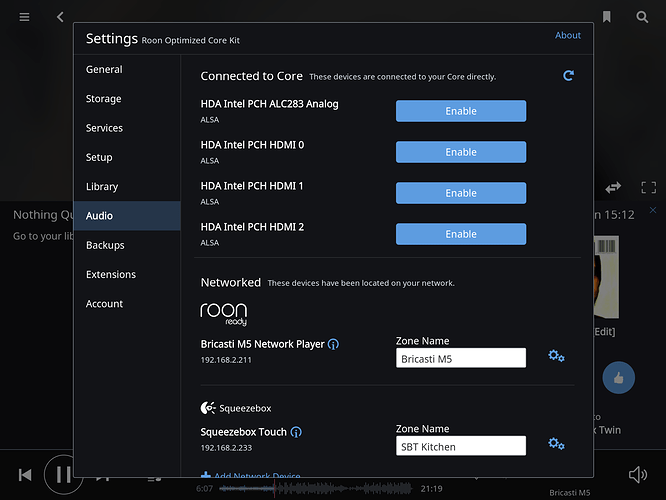 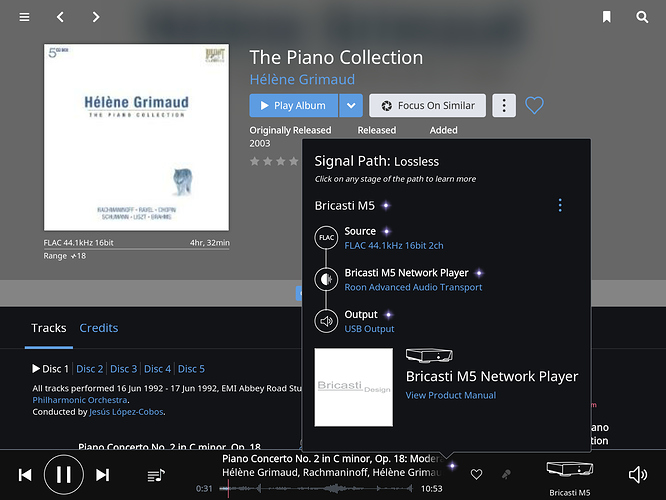 Don’t know what is means when a device is ‘Roon ready’. If it simply means that device ships with Roon bridge installed …

This should help: RKB - Roon Ready … the partner’s device supports RAAT (using the Roon’s SDK) with Roonlabs then testing and certifying the implementation.

It could be that the Bricasti devices are using the same RAAT ID, but let’s see what @support say.

Thanks for info. My belief is that we’ve been here before, most recently with Allo.

Yes, very similar to my current issue with two RPi DigiOne devices running Allo Dietpi GUI… One or the other, not both at once.

Is the RAAT ID visible in the Roon user interface, and if so where can I find it?

I agree, it sounds like an ID collision. When we reviewed this product, we were only allocated one unit, so if this is the case, this issue would have been invisible to us during certification.

I’ve reached out to Bricasti so they can setup a proper test and confirm/deny the hypothesis.

This issue has been tested and resolved with an update implemented today. Yes, it was an ID collision with the two M5’s running on the same network. Please contact your dealer and he will get you sorted out ASAP.

A post was split to a new topic: Why device volume cannot be controlled with the Roon DSP? Roon Ready Bricasti M5