Not working with Naim Muso-2

Network Details (Including networking gear model/manufacturer and if on WiFi/Ethernet)
Ethernet connection from core PC.

Description Of Issue
When trying to use my Muso-2 as an output device the Muso is identified by Roon and starts to play a track but cuts out after a few seconds.
Interestingly it is also identified as an Airplay device so I end up with two audio devices for the same Muso. Airplay does work but the sound quality is not great.
The Airplay device has minimal setup whilst the Muso device offers a lot more options under advanced.

The Muso works fine direct from Tidal and using other native play options.

Can you give some details on your networking setup? What router is in use? Are the Core and Muso both connected via Ethernet directly to the router or is there other networking gear involved?

Can you share a screenshot of Device Setup for the Muso?

It connects via LAN (Cat6) through a Netgear smart switch GS724T to another Netgear switch in my lounge GS108PEv3 and then to the Muso 2.

I can use the Muso fine with Airplay although it is a little prone to dropout at times.

Roon idenitifies the Muso 2 as a generic Airplay device and a native supported device.

the very short play I get using the native device before it cuts out. 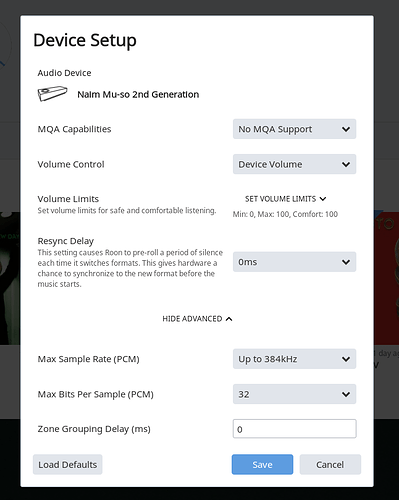 I have two things I would like for you to try:

A) Check that your Mu-so 2nd Generation is running the latest firmware using the Naim app on your smartphone.

B) Try connecting the Mu-so 2nd Generation to your network via WiFi instead of ethernet.

Let us know if these steps improve the behavior you are seeing.