Nothing in Playing Queue - but Roon is still playing tracks - Ghost in the Machine?

So 1.8 Build 806, just played one track, nothing in the queue, nothing showing in the ‘Playing Now’, but there is still music playing.

Basically Roon played the next track off the album, but has no evidence of it playing, or a record of it once it had finished. 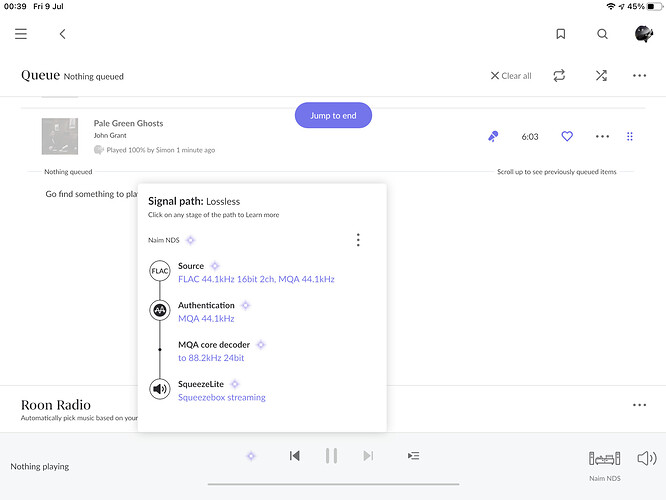 No, I was listening to the track listed in the history in that zone. It finished, but the next track played, but was listed in Playing Now, nor in the Queue or the History

If you check the queue, on the bottom you should have similar. It is actually hidden in your screenshot behind the pop-up.

Make sure to set it to no, and the behaviour should stop.
You will have to do this per zone too.

Roon Radio was, and is, unchecked.
Only one additional track, the next one from that album, played.
If it was as a result of Roon Radio, it would of 1. Just continued and 2. been something else

grasps at remaining straw
any chance you have 2 controllers ipad/phone controlling the same zone and they disagree on settings?

Now, just before I played the first track, I selected the Album, and by mistake the ‘Play from here’ selection on the desired track (adding more to the Playback Queue), then overrode it with ‘Play Now’, for the single track (which removed everything but that track) - the Playback Queue only had that track listed, but continued to play the next track without it being listed in the Queue or in Playing Now or the History.