I’m quite sure this is going to be one of those ‘Duh!’ answers, but I noticed a new symbol today and I would like to know what it means exactly.

It has probably been around for some time, but I’m just one of those peeps who don’t notice such new things immediately.

It’s the blue ‘slashed zero’ symbol next to the edit menu dropdown button (and it also appears in the ‘By This Artist’ list of album covers next to the Playlist pane. When I tap the blue slashed zero, I see that it turns into the heart that indicates a favorited album when filled, so I think the slashed zero is probably the exact opposite of ‘favorited’.

Question 1: am I right in my assumption that it is the ‘anti-favorite’ symbol?
Question 2: does it do anything else besides giving a visual indication (i.e. does it influence indexing or playlists or what have you)? 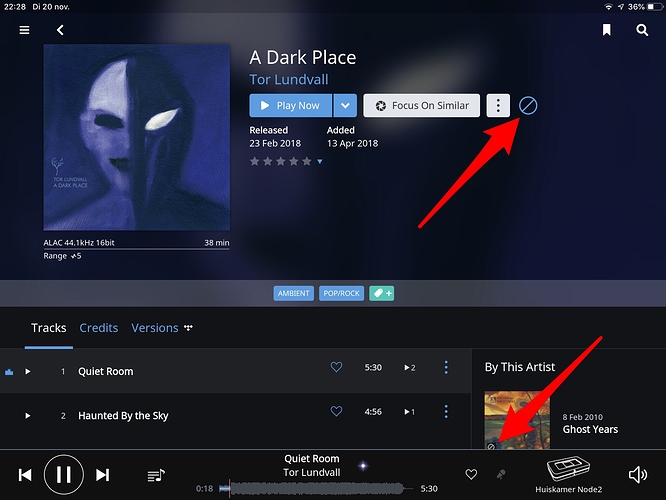 It is the opposite of heart. I believe it is to skip the track when you have room in radio mode. It probably informs the algorithm as well.

That makes sense, thanks!

Intersting album - I have some Tor Lundvall, which I like. Is this one any good?

No need for the duh, there are lots of things to know and find out.

There are, with each update and upgrade, but I have been using Roon for three years now, so I thought I had it more ore less figured out

I love it. It’s somehow darker and denser than many of his previous albums, but just as atmospheric