I have this recording playing as I write. All new to me. Wonderful, thank you so much!

You’re welcome. I’m just finishing up listening to the entire 3 CD recording and I can’t believe how amazing it is from beginning to end. I’m totally blown away. Of course it will get ZERO radio (or satellite) airtime here the US.

I love this record by Michael Gibbs and don’t see it about much so thought I’d share. I remember first hearing it on Geoffrey Smith’s Jazz, a BBC radio program. My favourite track is still the one I heard then: And On The Third Day, with Gibbs’ student Gary Burton on vibes. It starts off simple but builds and builds into an almighty crescendo that makes the hairs stand up on the back of my neck every time. The only bad thing about this record is it’s not on Qobuz! (It is on YouTube if anyone’s curious: Michael Gibbs - And On The Third Day - YouTube) 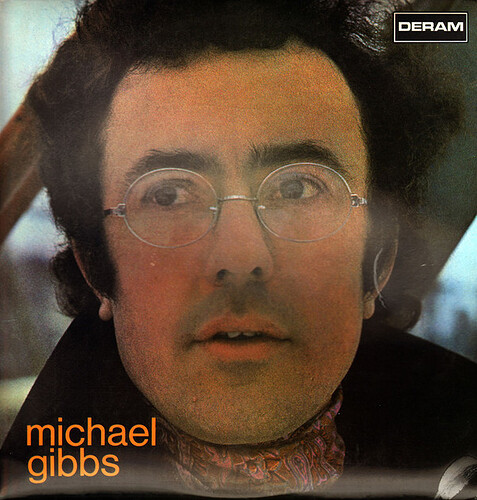 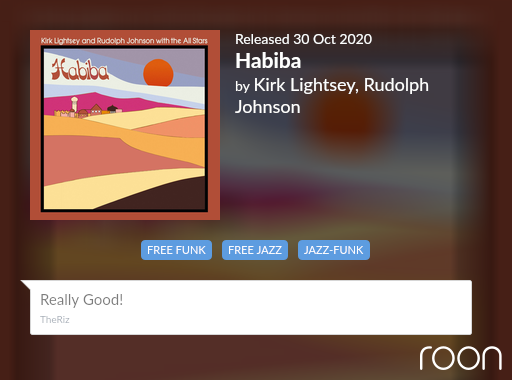 It turns out this is on Qobuz after all. Thanks for recommending.

I see that you are located in the UK where Qobuz has the album available but here in the US no such luck. 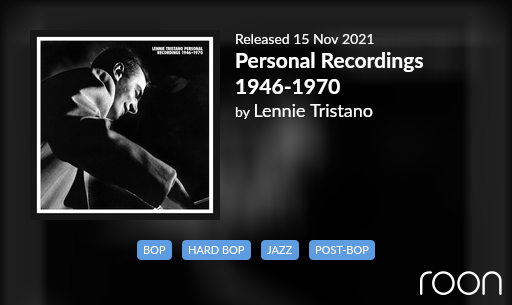 Doesn’t appear to be on Tidal or Qobuz but highly recommended nonetheless. Here some information about the recordings to whet your appetite. By the way the sound quality is very good for most of the set.

Dot Time Records and Mosaic Records, in their first-ever partnership, have produced a 6-CD set of over two decades of amazing output from Lennie Tristano, by any measure a visionary well ahead of his time. There are several configurations herein from solo to sextet recordings, from interpretations of standards to the first free jazz of its kind, all from Tristano’s personal tape collection.
Engineered and mastered by acclaimed tenor saxophonist and longtime friend, Lenny Popkin, who also delivers a mammoth, defiant, let-me-set-the-record-straight on Tristano’s personality and music in the liners, this should shed a long-overdue positive light on the widely misunderstood jazz luminary. The project is a result of tireless work from Executive producer Michael Cuscuna and co-producers Jerry Roche, Carol Tristano (Lennie’s daughter), and Popkin.

Disc One features Tristano in trio with guitarist Billy Bauer and bassist Arnold Fishkin in live recordings from 1946/47. We can observe that a drum-less trio was rather unique at the time although Nat King Cole had the same instrumentation in his trios from almost a decade earlier. Nonetheless, it’s immediately apparent how prodigious Tristano’s piano chops were even then as improvisation, energy, and playfulness never obscure his mastery of the piano, with each note ringing clear and purposeful. Here’s an example of Tristano’s technical expertise in “Lennie’s Song” as described by Popkin,”…this one featuring his ability to play a solo in block chords, sometimes referred to as “locked Hands” style. A melody is played as a top line in the right hand with the other fingers filling out a chord. The left hand doubles the melody one octave below. I know of no other pianist who could improvise a line in that manner.”

Disc Two has fifteen tracks of solo piano recorded at both Rudy Van Gelder Studio and at Lennie’s East 32nd Street studio, a mix of standards and originals, all played emotively spanning periods in the ‘50s and ‘60s. Here his melodicism and improvisation are on full display. His feeling for the blues is deep In “Lennie’s Blues” while for example in “These Foolish Things” Popkin provides another style insight, “…begins with Lennie playing a line – all in all chords. He is improvising 4 or 5 lines at once -voices of a chord – and another line in the bass – all moving together in perfect harmony. Following that is a free-flowing melodic line in double-tempo-with a bass line harmonizing the increasingly complex top line.”

Disc Three is a collection of live sextet recordings featuring Lee Konitz (alto), Warne Marsh (tenor), Billy Bauer (guitar), Arnold Fishkin and Joe Shulman (bass) and Jeff Morton (drums). This is the first recorded performance of a group playing “free jazz” in front of an audience at a club in “Live Free.” Nothing is composed, it’s all spontaneous playing but with a clear link between swing and free playing, rather astonishing considering it takes place around 1949. Although, it’s free, it has almost no parallel to so-called later “free jazz,” sounding somehow more organized. The remaining seven tracks are not “free jazz” but highly improvisational bebop with plenty of call and response, point-counterpoint, and remarkable chord changes.

Disc Four goes the other direction – straight ahead. Tristano leads two conventional trios, both with Peter Ind on bass and drummers Tom Wayburn on one with Al Levitt on the other. These tunes, again a mix of standards and originals, reveal the lyrical side of Tristano, who is better known for more angular, improvisational fare. This is superb trio work with terrific connectivity among the three, with Ind’s bass especially impressive throughout.

Disc Five is a collection of duos and trios with bassist Sonny Dallas and drummer Nick Stabulas. These tracks are very loose and mostly swinging, revealing strong interplay and harmonic exploration, the latter especially true in the trio settings. “You Go to My Head” highlights the duo tracks while “Lennie’s Groove” showcases the trio’s swinging style.

Disc Six begins with a groundbreaking free jazz session from 1948, recorded in Tristano’s house in Queens, featuring Lee Konitz, Warne Marsh, and Billy Bauer for the first seven tracks, an entire set. Note the absence of a drummer. This predates the historic Capital sides Intuition and Digression. Much of Tristano’s work here is inventive comping as we hear impressive solos from Konitz, Marsh, and Bauer – 1948 (let that sink in). The remainder of the disc are live recordings form the Half Note club in NYC where Tristano often appeared in the ‘60s for two weeks at a time. Most are with the trio of Dallas and Stabulas with the highlight as the final track in the collection, a ten-minute version of “How Deep Is the Ocean” with Zoot Sims at his expressively soulful best and a similarly inspired Konitz. Dallas matches their fervor in his bass solo, supported by Stabulas’ nimble brush work, setting up a rousing climax authored by the pianist and the two horns. — glidemagazine.com

Really nice set here and this is on both Tidal and Qobuz! 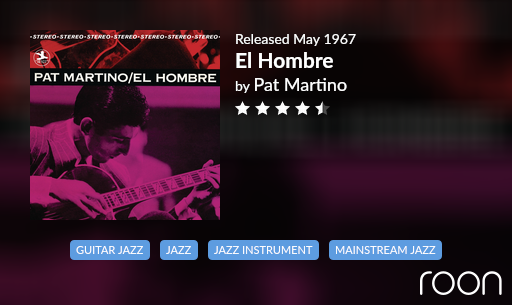 Hard to find a better Duke recording among an astounding legacy. Trust me. 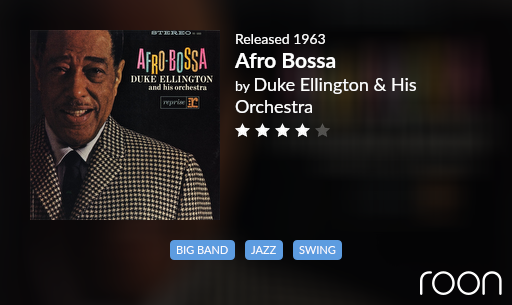 Not to question your feelings about Afro-Bossa but I think that it’s rather easy to many other Ellington recordings that are the equal of this wonderful recording, which of course is a great thing.

Here are few of my favorites 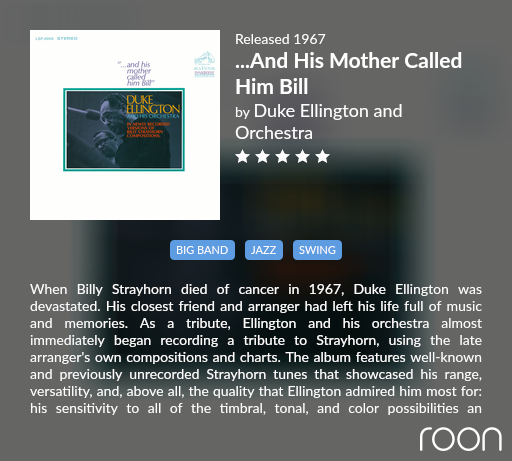 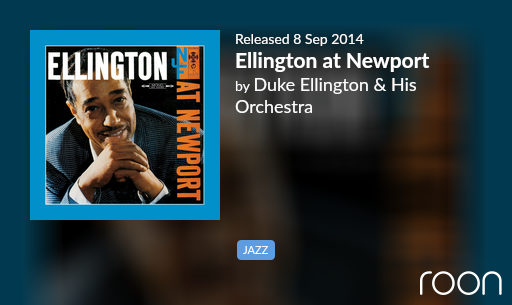 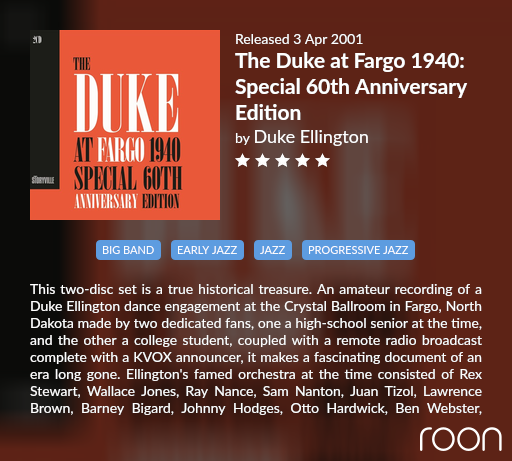 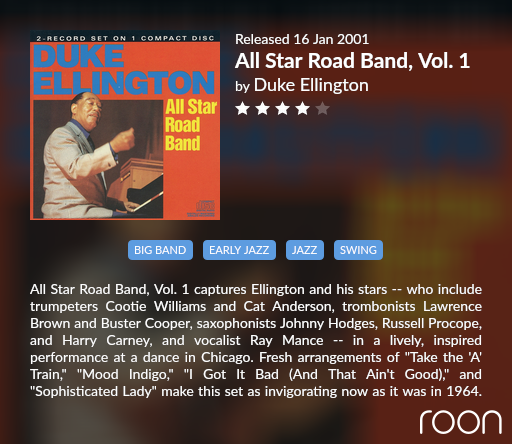 I could and at some point will go on but these should keep you busy for a while.

Very wonderful selection, I know each recording well. Here’s a volley back that is always a fun ride that I’m positive you know. Yet, this may be new to some of our colleagues. A true gem. 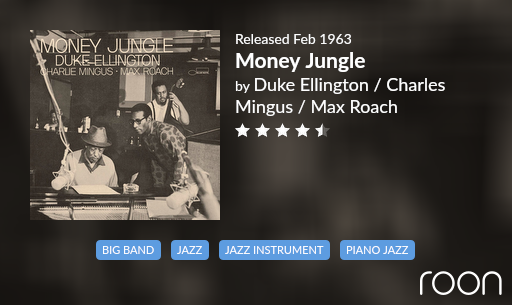 Here is an essential collection of Ellington recordings. Back in the 1930s and 1940s most music was released as singles or collection of singles called an “album” (that’s how the term album came to be) since the long playing record had yet to be invented. In addition for several years during the Second World War there was a musician’s strike 1942–1944 musicians’ strike. Sadly these two events occurred during the time that what many considered to be Ellington greatest orchestra was in place. Subsequently Ellington’s recordings during this period were a scattershot affair and for many years were very difficult to find and even if one managed to locate a collection it was often poorly produced with inferior sound and scant information. For proof of this sad state of affairs just to try to make sense of the discogs listing for Duke Ellington, in fact I have several collections for early 1940s Ellington recordings on vinyl, some good and some not so good. Here’s one of the good ones: Duke Ellington 1941

Luckily the age of CDs brought forth several fine collections of Ellington’s recordings during this period and none of these collections is better than The Blanton-Webster Band: 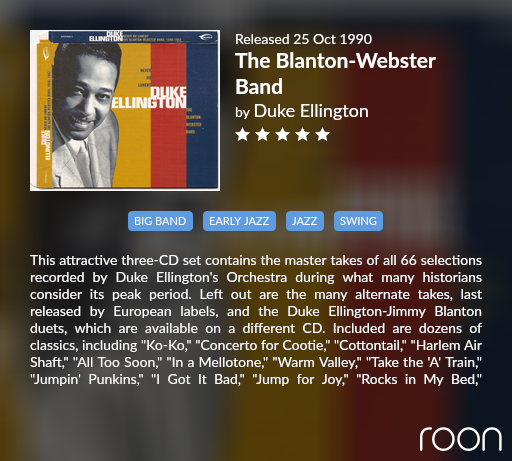 Bravo Ralph. I have Disc 1 spinning. Funny how these recording have so many different covers. Absolutely top flight music. 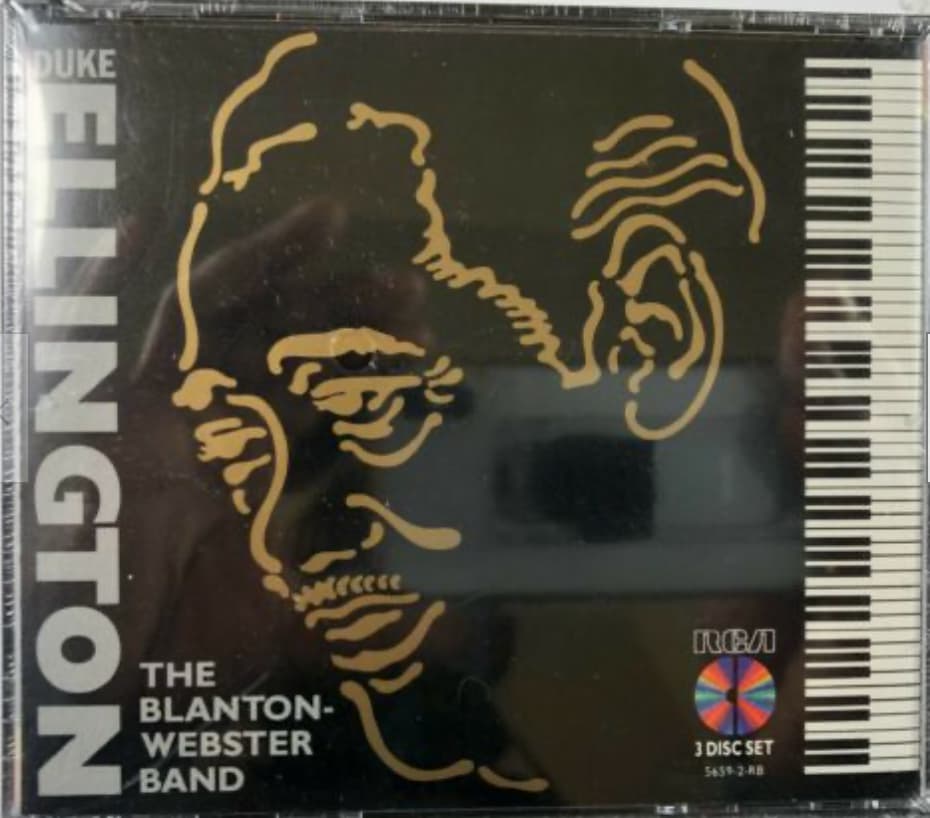 Funny how these recording have so many different covers.

There may in fact be two different issues. If I remember correctly there were some very minor issues with the beginnings of a few of the tracks on the original issue (which has the cover you posted) that were fixed on the subsequent issues (the cover that I posted). Please don’t fret because the issues were/are very minor but you know how nit-picky jazz nerds can be.

Thanks Ralph for the insight on Blanton Webster. I failed to mention regarding Money Jungle that the Japanese remaster was a marked improvement over the original. Far less brittle sounding which is just great. I believe the Qobuz offering is the remaster. I’m spinning a disc on this one.

I have a 24bit/96kHz vinyl rip of the Classic Records release, mastered by Bernie
Grundman in my Roon library.

And then there’s this wonderful version (available on Tidal and Qobuz): 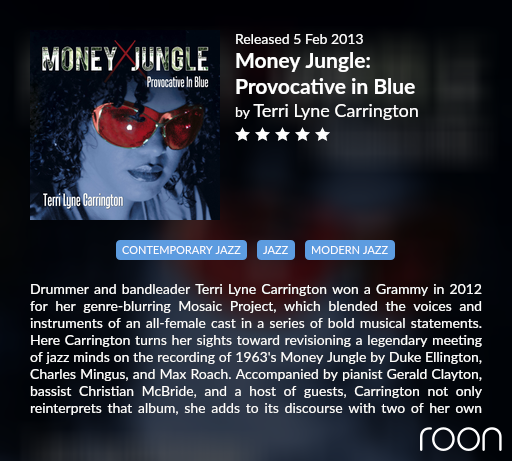 Since we are thinking about Money Jungle (thanks for TL Carrington), It seems natural to take the conversation from Duke to Charles Mingus. Hard to dispute the power of this one: 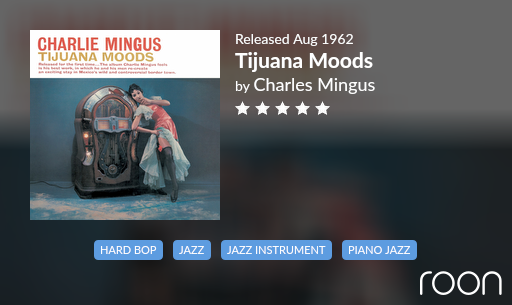 Ordered the Tristano box from Mosaic this afternoon. Thanks for the tip!

I’ve always been partial to this period of Mingus and the band is amazing:
Available on Tidal 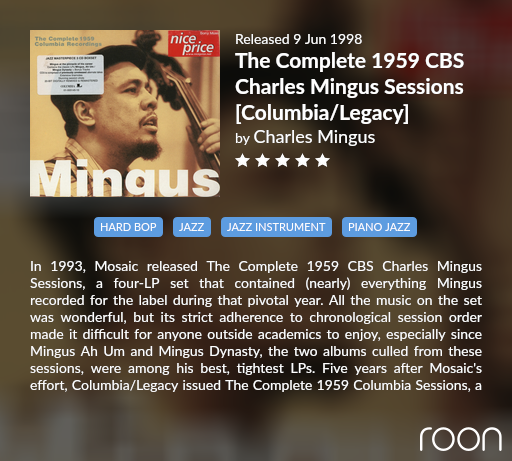 Most likely my love of the 1959 recordings comes from this excellent two LP release from back in my college days (a 24bit/96kHz vinyl rip): 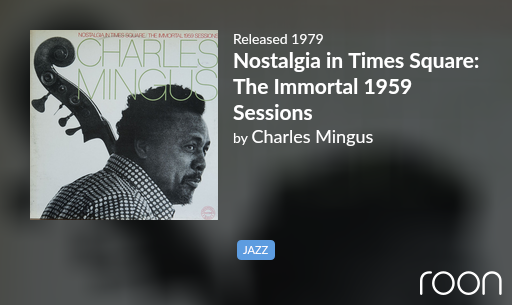 Great music. I have the former, the latter will go on my list. Will probably stand alone on this one: 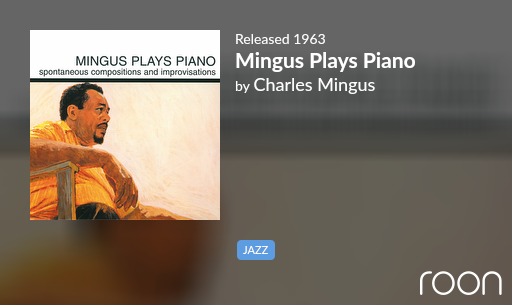 This is a great new release by Gabor Bolla with fantastic energy from everyone involved! It’s available on both Tital and Qobuz. 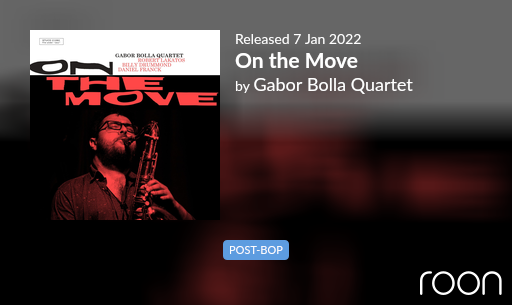