I can hear my i3 from outside the room when it’s just at idle. It’s also quite an annoying pitch because the fan is so small, I guess. I’ll either have to use the fanless case or situate it somewhere where the noise isn’t an issue at all, so not in my office or the listening room.

I’ve never heard any noise on either my i3 or i5 NUC. They sit on my desk.

You can hear yours from another room and even at idle? Something is definitely amiss.

It’s brand new, so nothing to clean.

I don’t believe there’s anything wrong, it sounds like normal fan noise for a computer with a fan that size, similar to my laptops when they were in there.

The room/house is otherwise dead quiet - when my NAS is running, that masks it to an extent, except the pitch is different.

Also, I’m just sensitive to noise like that - e.g., I often pick up on transformer noise others filter out.

[edit: however, see further answer below]

Sorry, it just occurred to me that you might have meant your fan doesn’t tend to run when the machine is at idle/playing back Roon without analysis/DSP, or at least runs at very slow speed.

If so, then something may be amiss with my NUC.

Is there anything I can try (e.g. in Bios) as if it’s faulty it’s still only a week old, so I can easily return.

Make sure the BIOS settings are correctly set for the fan.

Sorry, it just occurred to me that you might have meant your fan doesn’t tend to run when the machine is at idle/

No problem, but you were right, at first. I have never heard a noise from my fan.

If you’re referring to a high pitched noise, then it’s probably my diminished hearing.

Thanks I’ll have a look. No idea what the correct settings would be, though…

I dread any hearing loss as I get older. I always wear protection at amplified concerts now, but in my youth I was a drummer before anyone was careful about such things!

I wouldn’t say that high pitched in total terms, just compared to desktop fans which tend to be larger/lower in pitch. I definitely find my NUC irritating, but as I say, it might well be a ‘thing’ of mine!

I had a quite annoying high pitch whine from my NUC8i3 for the first few days of usage. It seems the fan has “broke in” because today it’s almost silent.
Give it a few days of running (i had mine work quite hard with indexing 4Tb of music) and see if it goes quiet?

It’s a good thought. Sadly all indexing/analysis was over days ago, it was much more noisy while that was taking place.

Okay, just sayin’, i was disappointed with my NUC8i3 as it was noticeably noisier than my NUC7i3 initially. Now i can barely hear neither of them in the same room when i’m more than a few feet away.
(Given that all indexing and analysis is done, of course)

Sure, I’m not dismissing what you experienced, just it doesn’t seem to be the case with mine right now.

Fortunately I have the fanless case to try

Installed in the fanless case today. All seemed to go well, except that the Plato case has very slight tolerance issues with the screws for the motherboard - 3 aligned perfectly, one out enough that I essentially had to force the screw in, and it’s at an angle, but seems to be holding the board down OK. Not the kind of thing I like to do, though and it should align properly really. Would be helpful if there was some adjustment on a couple of the screw fittings to accommodate this type of thing.

Also, it’s probably a good thing I don’t need to use the Thunderbolt 3 port, as it’s not quite aligned properly either.

Anyway, that aside, it seems to be working and sounds good.

Can’t monitor temps while running Roon directly with ROCK, but temps in BIOS straight after a reboot from Roon seem around the high 30˚Cs and then rise gradually and stabilise around low 40˚Cs. 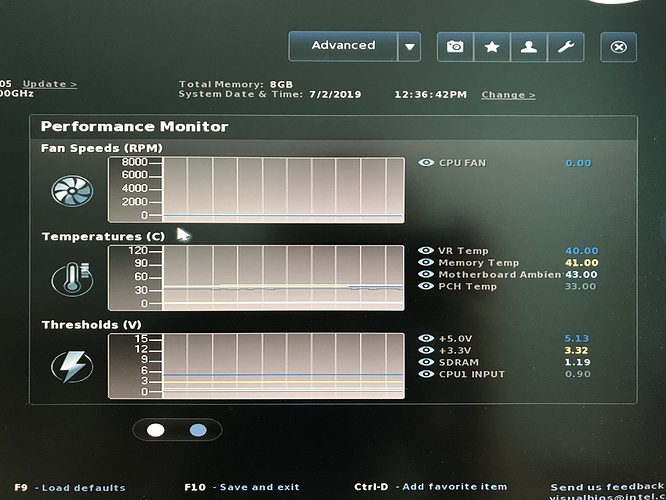 Hoping this will stay within temps and be a good build for a few years now. Thanks to everyone for your help!

What would be the quickest/easiest way to install an OS on this to check thermals? Can I download Windows and install just for a day to check this, then go back to ROCK, or is Linux easier (I’ve never used Linux).

Just a little nervous where that screw wouldn’t go completely flush and want to make sure I have decent thermal coupling - I’m a little concerned that the case doesn’t seem to be getting that warm to the touch (although not sure if it should when just at idle/playing roon with no DSP, etc.

Yep. You could do that. Backup your Roon setup. Install Windows, install Roon, restore backup. Then ‘just’ redo the install of ROCK. You may be able to get by without redoing all the BIOS resetting. I did all sorts of different OS installs on my old CAPSv3 Zuma computer.

I’m comfortable with Windows such that it’s second nature. Linux is a foreign language and it was work to make it work. I should think that if it runs cool with Windows 10, it will run cool with ROCK.

Thanks, yeah, my instinct was to avoid Linux if I’m not familiar with it, as well - would probably take me longer to learn than to install Windows.

OK, will give that a go - makes sense that Windows, if anything, should consume more resources than ROCK.

Several! I think i used HWMonitor when in Windows.

Just prepping the Windows install and will give it a go later. Curious to see actual temps in use and whether that dodgy screw mount made any difference. Would be good if I got the thermal paste and install right so I don’t have to get spare parts or exchange the case and start again.

I use CoreTemp on my Roon Server…
https://www.alcpu.com/CoreTemp/

It can be configured to run in the systray

Fab, love the look of that!