NUC ROCK compatibility and over heat issue if used with 100K tracks?

May I know with the above spec for my NUC will be good enough to store 100k albums tracks and will it cause overheating issue in the long run?

You seem to have the capacities of your two discs the wrong way round.

The m.2 SSD is used for the Roon operating system, the Roon application (Core and Output components) and the Roon database.

The 2.5" drive will be used for local storage of your music.

Just noticed that you intend to store 100k albums - so that’s a big library. If these are locally-stored albums, you’re going to need more than 2TB of storage. I have 1,300 local albums, and have used 40% of my 2TB disc to store them…

I suspect that your spec is underpowered on all fronts for a library that size.

Music storage does not require SSD speed - the Roon database definitely does.

ROCK For Large Libraries (12k+ albums) or DSP Use

100K+ albums sounds like a job for a high-performance server

If my library was pushing 1 million tracks or more, than, I would invest in a desktop CPU with 32 GB of RAM, several large internal HD drives, and run Linux or Windows.

If you are still planning on wanting to run a NUC, you should go for 32 GB of RAM with a database that large. In terms of storage, an external USB HDD is already faster than is required for music playback.

Wouldn’t the initial scan take a very long time if via a presumably USB interface from an external hard drive? My 27k albums mix of CD quality and high Rez took quite a while on internal hard drives on dual Xeon 16 core CPUs with 128GB RAM

I have a feeling that the NUC might perform ok. And I agree with maxing out the RAM to 32GB for a library that size.

If NUC is still desired, and he has a free desktop system, he could import and analyse everything using a desktop PC and do all the heavy works on that. Once everything is done, do a database backup and restore the database to the NUC. At this point, I the NUC might be just fine.

It does not matter if the song is stored in a slower storage?

SSD speeds are not needed for storage drives. The hard drive will not be a bottleneck in playback. They’re nice to have when copying files to the drive and when doing track analysis.

Not sure how ROCK allocates ram, but I’m running Roon Server (100k+ tracks,local), HQPlayer and using ZFS which takes ~50% RAM for the ARC cache. And as seen below I sometimes use a little swap. There were some initial hiccups but I’ve gotten this machine very stable now. 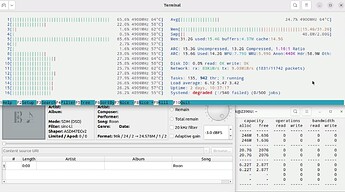 So on a machine dedicated to just RoonServer, I think 32GB is more the sufficient.

Hard drive wise, the boot SSD is 256GB, currently 20.7GB is used for Ubuntu and RoonServer. And that’s with 100k+ local tracks in the server library (not the audio storage).

I guess what I’m trying to say is, even with a lot of tracks, my RoonServer library is under 20GB.

The storage drive usually show small blips every so often for transfer, but not sure how accurate the reading would be as it’s showing ZFS pool iostats and probably just storing data in the ARC RAM cache.

ROCK is probably OK but the server would need to a beast 16 Gb unlikely to cut it . I would go Windows with at least 32 Gb RAM maybe even 64 Gb. Then add a load of 4Tb HDD

Tidal or Qobuz tracks/albums that are added to your library will also be accounted for in the database.

Tidal or Qobuz tracks/albums that are added to your library will also be accounted for in the database.

Accounted for storage space in the roon OS where i install? or accounted for the storage music drive.

In the database - which is on the m.2 SSD. Streamed files are not stored locally in music storage.

100k tracks would be fine with i3 and 8GB and for 100k tracks ignore my previous suggestions. I have double the number of tracks you have and used to use NUC8i3 with 8GB and it was fine. I upgraded to NUC8i5 with 16GB when I repurposed the NUC8i3.

It’s been said above …

I added 32 gb RAM because I could , my library is around 130k , but a lot of classical so track size can be high

Not sure where you are getting the connection between running hot and number of tracks from. I have a 5 year old 7i7 NUC with 16GB Ram with 150k tracks. Most storage is external on two USB drives. The NUC has never run anything hotter than ‘warm to the touch’ with the fan barely running. I only use a bit of DSP (PEQ) on one endpoint and there is never more than two endpoints being driven at any one time (six in total for the house).

No doubt if I used convolution (planned) regularly or a lot of DSP on multiple active endpoints then the heat situation may change but at the moment it is clearly just ticking over thermally. Keeping the NUC ventilation slot and fan clean from dust is important if your ROCK is in the living room (mine is in the garage, so largely dust free).