My ROCK is a NUC7I5BNK in an Acasa case. It wouldn’t update to 1.6, so I tried to restart my router. This led to a nightmare in which I had to reset and completely reconfigure the router. But the ROCK still wouldn’t update, so I turned it off via it’s web page. But when I pushed the button to turn it back on it simply showed an amber LED. And now I have no access via the web page.

I’ve taken out one of the memory modules, but this did not change anything.

How can I get my ROCK to turn back on?

Do you have attached to a monitor? What is the bios saying?

Flagging @support for you, as you missed the @ sign (support won’t be notified without it).

I do not know what the amber LED on your Akasa case means (never see a LED on mine).
But the continuous blue LED on the NUC should normally mean : I am powered up, correctly.

As Ged said : at first you could connect a monitor or tv, so you can actually see what’s happening (or not happening).

I have a feeling that your NUC is starting up as it should, but with a fixed IP that’s no longer valid on your now-resetted router…

Please post a picture of what you’re seeing when plugging in a monitor to the ROCK.
Are the Ethernet port lights flashing?

Well, after fiddling with the ram and ssd more it just powered up, as you can see from the attached picture. And after a couple of tries it accepted the new software. And now audio is playing. 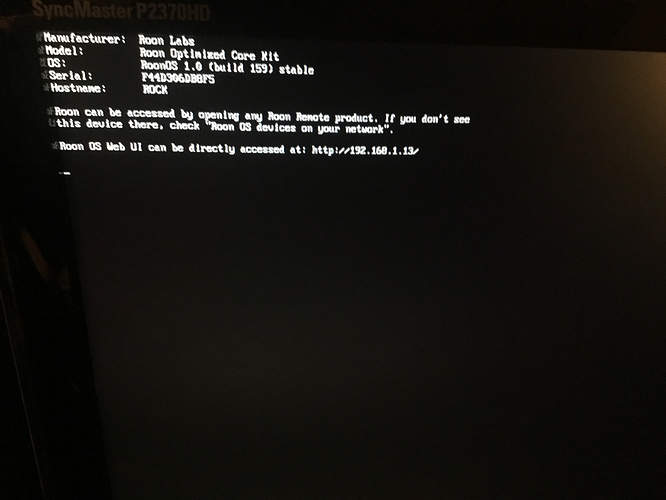