Bought an Nucleus from an local dealer back in Dec 20 and been using it for streaming to my Meridian 861v8 (Surround Processor) ID41 card mainly. Been playing tracks in Stereo/Trifield and DTS without any glitches. Also, the Nucleus HDMI output is connected to an Meridian HD621 for playing multichannel tracks to the 861v8 via the MMHR cable/bus. Most multichannel tracks are in DSF file format and ripped from my original SACD’s. The Meridian HD621 can’t handle DSD format, so the Nucleus is converting it from DSD to PCM.

Here are some pictures of the Nucleus HDMI settings: 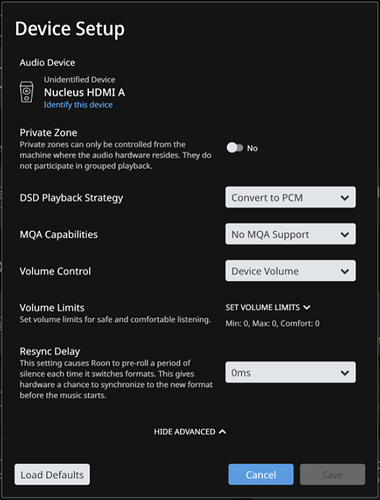 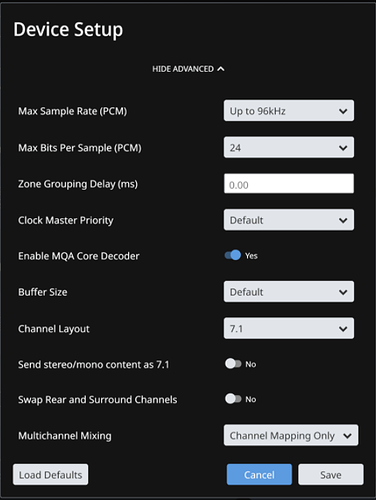 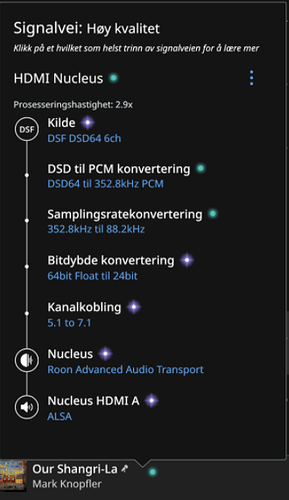 The way the Nucleus is processing the DSD file multichannel playback at the moment is long away from perfect. Sometimes, the channel output is really strange no Center sound, vocals at Rear speakers suddenly and the whole “sound-image” is sounding really wrong. When skipping to next song, it may sounds correct again. This happen randomly in all kind of albums at the moment, but today it’s wrong on any track I try to play via HDMI output.

To locate where the problem is, I’ve been using my Pioneer UDP-LX500 that is also connected to the HD621 to play SACD’s in multichannel. From the first SACD and track I tested, I could hear that the “sound-image” was correct, less louder and a touch of a bit warmer sound.

I’ve been testing the Nucleus and Pioneer for 2 days now and playing multichannel music on Nucleus is no way for me at the moment. Streaming DTS music playback from Nucleus to ID41 still sound amazing, so I’m now asking how good is the Nucleus really for handling DSD playback?

I’ve been reading that the best way to play might be to use a secondary Roon product/Endpoint.
I can see why, since converting 6CH DSD to PCM is demanding for Nucleus. But, the main reason for I bought the Nucleus was to have a “system out of a box” and no playback or sound image issue.

I’m wondering to try an NUCv7 from a friend with ROCK and use as Endpoint to the HD621 for DSD multichannel playback. Will then the NUC Endpoint do the DSD to PCM converting or still the Nucleus?

I see that Exasound also have some products for playing DSD multichannel, but at a extra cost offcourse.

Will then the NUC Endpoint do the DSD to PCM converting or still the Nucleus?

All conversion is done on the core.

Does it help if you change Multichannel Mixing to “Downmix As Needed”?

The main issue is only that the channel processing that is done by the Nucleus is wrong, vocals at rear speakers and not in the front at it suppose to be.

I’ve been following this guide: Multichannel

Well, that (vocals at rear) certainly shouldn’t be happening. My suggestion would be to move this thread into the Nucleus Support category of the forum, so that the Support team are notified and follow this up with you. I can do that for you, if you wish.

Yes please Geoff and thank you!

I’ve also now tried “Downmix As Needed” without success.
I will copy my ripped DSD album folder to an USB stick and try to play from the USB stick via the Pioneer player to verify that the rip is ok and not only the SACD disc.

Moved this thread to the Nucleus Support category, so the Support team will see it and someone will be along to respond.

I’ve been testing lot’s of hours yesterday and here are my results:

TEST 1, Mark Knopfler - Shangri-La (DSD64 in DSF, MCH 5.1):
Signal path: Pioneer HDMI 2 --> Meridian HD621 --> Meridian 861v8 --> Meridian 7.1 speaker setup
Playing Multichannel DSD (.dsf file) music stored on an USB stick on the Pioneer is sounding correct and all 7.1 channels are playing as they suppose to do, same as before on my old Oppo. This DSD album is the same that is stored on the Nucleus internal SSD drive. This means that my SACD rip is ok and there is no doubt on this rip anymore.

TEST 2, Mark Knopfler - Shangri-La (DSD64 in DSF, MCH 5.1):
Signal path: Nucleus HDMI 1 --> Meridian HD621 --> Meridian 861v8 --> Meridian 7.1 speaker setup
Nucleus HDMI setup as shown above. I don’t get the side channels to play music at all and sound image is harsh. Vocals in front and sounds correct for me. Tried again with “Max Sample Rate” set to 48kHz. I can hear music in side channels but the vocals are moved from front to rear speakers. Whole surround playback is sounding wrong. Sometimes there was no sound from Rear Right speaker as well. It’s clearly that the Nucleus is having issue to handle Multichannel tracks properly somehow. 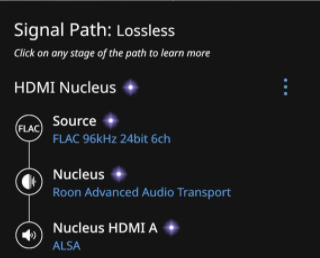 Now, the sound image suddenly was sounding correct, but the 861v8 processor was showing PCM 96k and not the same as in TEST 3. Anyway, the sound difference between the Pioneer and Nucleus in this test is minimal, but I still would prefer the sound from the Pioneer.

Conclusion:
There is no doubt that the DSD to PCM conversion on the Nucleus/Roon is the main problem. I’ve not opened the Pioneer to look inside, but I assume there is dedicated hardware circuits to do DSD conversion compated to the Nucleus who is basically an PC.

Been playing 2 channel DSD music on the Nucleus today and using the 861v8 ID41 card as endpoint instead of HDMI. Nucleus is converting from DSD to PCM as expected and I’ve been comparing 2ch DSD and 2ch FLAC/WAV playback to the 861v8 ID41 card several times. From my listening tests, I can’t hear any big difference and the sound quality is how it suppose to be.

Note that the Meridian ID41 card only support up to 192kHz/24 bit 2ch and 5.1 DTS format.
Multichannel FLAC/WAV or DSD is not supported, even 2ch DSD is not.
I can understand that multichannel DSD and conversion to PCM “on-the-fly” is demanding and the software need to be stable.

Is there any way to buypass the DSD conversion on the Nucleus and use an Endpoint to do this instead?

Thank you for the detailed testing here! I spoke to the team and we would like to try to reproduce your findings in the lab.

Can I please ask that you upload the media you used for the test to Dropbox / Google Drive / etc. and send me a link via private message (click my name -> message)?

Then, can you provide a set of reproduction steps that we can provide our hardware team to try and reproduce the issue?

Any questions, just let me know, thank you!

Thanks Noris for your response. PM sent.
I’m looking forward for your team lab test’s.

Been playing all kind of formats in the last week and if the DSD in surround starts to sound wrong (vocals in rear speakers), I just hold the pause button while playing for 2-3 seconds, song stops (light goes off), then I hit play button and surround sounds ok again. If I want to play DSD files, I’m currently using the Pioneer and external HDD to play .dsf files. No sound difference between disc or file. DSD file playback on Nucleus I’m avoiding at the moment.

The DSD album of Shangri-La in 5.1 I own, I did a DSD to PCM conversion on. Short story, used dsf2flac (compiled) in Ubuntu. Screenshot:

This dsf2flac conversion sounds really good on Nucleus in 5.1 and HDMI out. No surround issue with mixing the vocals or etc. But, to do a conversion on 100++ SACD’s I have will take days…
I will send you PM with this converion as well to test in the lab.

Thanks for the media files, let me get this over to the team for further testing.

Then, can you provide a set of reproduction steps that we can provide our hardware team to try and reproduce the issue?

To reproduce the issue here, the steps are to import the DSD file, set Roon to convert to 88.2kHz and then the issue should reproduce, is that correct? Please confirm when possible.

provide a set of reproductio

Correct. DSD files stored on an SSD inside the Nucleus and then imported from Windows PC via SMB. Nucleus settings as shown in first post, only Channel Layout is now set to 5.1.Then you shall be able to re-produce the error, but not maybe on the first track. You can try to shuffle between 2ch tracks in FLAC/WAV, 5.1ch tracks in FLAC/WAV and then 5.1ch DSD or whatever you try first to re-produce the error.

Listen special to rear right speaker, some tracks I don’t get any sound in this channel and vocals move from front to rear. By long press pause button and play again, surround ok again.

Thanks for the additional info @regeli, I’ve forwarded your files + notes to our hardware team for testing.

This issue is with the QA lab, we’re still looking into it. I hope to have feedback ready early next week. Thanks for your patience on this.

No worries, thanks for following up.

Bumping this as an reminder

Back in November 2020, I bought an Nucleus for replacing the Meridian Sooloos system in my house.

The main reason for buying it was due too support for playing multichannel SACD and DVD-Audio files from the internal SSD disk out via the HDMI port.

I have many hundreds albums of ripped SACD and DVD-Audio disc in DSF and WAV format, stereo and multichannel.

First issue that occured was the sound quality were not very good. Specially when playing DSD files, Roon converts to PCM since the HDMI switch does not support DSD input signal. Sometimes the channel layout out to my speakers when playing is totally wrong.

By converting SACD files to FLAC format, this seems to solve the issue and the Roon @support team never replied back to me in below thread:

I’ve now converted all my SACD albums to FLAC. Playing SACD and DVD-A is now without the channel layout issue now. The HDMI output from Roon is also set to 5.1, so the processor convert 5.1 to 7.1 and not Roon.

But until few weeks ago, I discovered another issue and from what I discovered from day one. I’ve copied my DSD and DVD-A folder from Roon SSD drive to an external harddrive. DSD folder in .DSF file format, not FLAC.

Then I connected the harddrive to my Sony UBP-X800 M2 blu ray player to the same HDMI switch that the Nucleus is connected to.

The result? Well, the anwer is that the sound sounds distorted/harsh via the Nucleus than via the Sony player, no matter if it’s SACD or DVD-A files. Keep in mind that the Sony also convert DSD to PCM 88.2kHz during playback.

My conclusion and from what I hear is that the Sony player sound quality is overall a better listening experience for multichannel sound.

Nucleus is basic an PC/Intel NUC and I suspect there is to much jitter/digital noise from the Nucleus. The unit is not audiophile enough to use as an multichannel music player with the HDMI connection probably.

I’ve read that many people says it sounds great with HDMI output, but in my system, I cannot recommend the Nucleus at this stage. Until Roon Labs can prove the opposite?