connected via ethernet to Asus RT-AX86

Upon trying to backup my Roon database, my Nucleus found both external storage devices, but when I selected one and pressed Save, I got a “Unexpected Error: Not Found” message.

Also, how do I back up my music files to the external storage device?

A couple of questions:

The Backup function in Roon is solely for the Roon database; there is no built-in backup function for the music files themselves.

There is a feature request for this , but nothing has been announced by Roon Labs thus far. 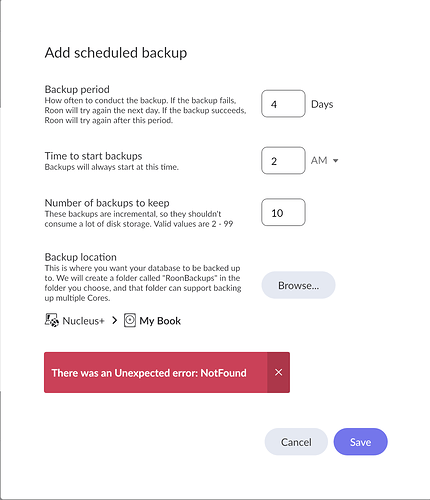 I am attaching a screenshot. I tried each storage device individually. They are both formatted as Journaled HFS+.

The HFS+ format is Read-only, as far as the Nucleus is concerned. That is the cause of the error.

Note that HFS/HFS+ (also known as “Mac OS Journaled”) is read-only, which means that the Nucleus will not be able to make changes or store new music on the USB drive.

I reformatted to Exfat and now am getting “Invalid path specified”. Attached is a screenshot of my path. 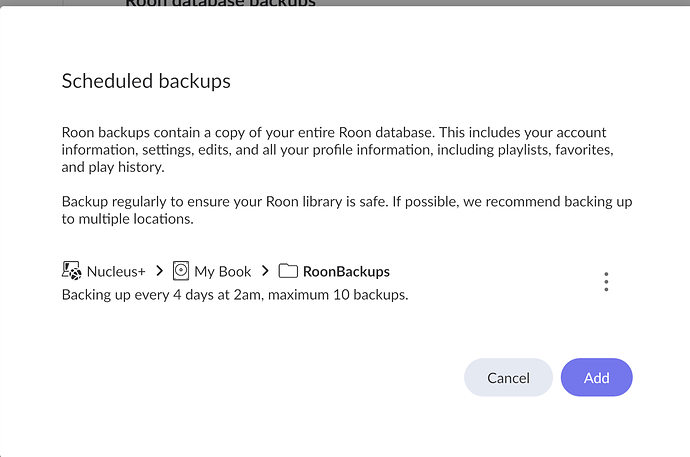 Did you (re)create the backup path after you had reformatted the drive?

The backup path shown on the last screen shot I sent you was generated by Nucleus after reformatting the WD external drive.

And you are choosing the “Force backup now” option from the “3 dots” menu shown on your screenshot?

I believe I tried that to no avail. However, I just now selected “Backup now” from the Roon Database Backup page, selected the appropriate location and a successful backup occurred. I should be set now.