I have Nucleus set up & ready to go but wondering about internal H.D. The hard drive has been recognized by Nucleus & I have my music files (portable SSD) connected to Nucleus via USB.
Is there anything more I need to do to direct my music files onto the Nucleus internal H.D.?

When you say “the internal H.D.” of the Nucleus, do you mean that you have added an additional drive for storage of music files to the Nucleus as described here:

These step-by-step instructions will walk you through the process of installing an HDD or SSD for internal storage in Nucleus. Step 1: Make sure you have everything 2.5" HDD or SSD with a drive height of 7mm or 9mm  4 black screws 4 silver...

And you have formatted it using the Web Administration Page?

Connecting to the Web Administration InterfaceYou can use a web browser to perform operations like configuring settings, updating firmware, formatting internal storage, and resetting to factory settings. To use Roon to help you load up the Nucleus...

Nucleus supports placing an HDD or SSD into its case, to create a fully contained solution. If you chose to use an SSD here, the system will stay fully silent. The drive needs to be formatted using the Nucleus web administration interface before it...

Thank You Geoff, I think I have it now! It is now copying music to “Internal Storage”…I was struggling with the Network Share part & after going through instructions a few more times it seems to be working. Thank You for your help.

I thought I could copy music to internal drive by plugging drive that contains music directly into Nucleus. This method in not possible??

No, there is no “copy” function in the Roon OS used in the Nucleus to move files between drives attached to (or installed in) it.

You can add Folders that are on an attached drive as Watched Folders in Roon using the Settings > Storage > Add Folder button (the drive and folders can be browsed).

OK thank you sir, I appreciate your help! You have resolved my problem…I am just “OK” plucking around on the computer but totally lost as I mess around with the networking aspects.

Wait a minute… this is confusing. Surely it would be possible to copy files to an internal HD in the nucleus over the network?

Yes, of course it is - but that’s using the copy function of either Windows File Explorer or the Mac Finder to do it. There’s no Copy function in the repertoire of the Nucleus to do this.

hello gentlemen, I need some help in more specifics on transferring my music files (~500GB, not that much) from either a USB drive or a Synology NAS into Nucleus internal storage (Samsung EVO SSD). I was able to see the Nucleus internal drive, the USB drive attached to Nucleus via USB, and the Synology storage on the network in Mac Finder for no problem. However, when I did copy and paste via the Finder between those folders, the transfer speed was extremely slow. It took an hour to transfer only 15GB of files (my ~500GB library will take 33 hours). I learned from Synology tech support that when I sent “copy and paste” command through Mac Finder, it would use smb protocol and the files would go from the USB drive attached to Nucleus to my Mac first and then travel back to Nucleus. In other words, data travels through my home network even though the USB drive is physically connected to Nucleus via USB cable. Same situation happened if copy data from NAS to Nucleus, even though the NAS and Nucleus are both connected to the same network switch via CAT8 audiophile grade ethernet cables. Synology told me that this is how smb works unfortunately when the command is sent from a computer on the network. This is the reason Synology (and other NAS manufacturers) developed File Station app, which allows copying files from the NAS to an attached USB drive completely local between them (~500GB took less than 30 minutes to transfer when I used the NAS for RoonCore and music storage). I am very surprised Nucleus is so bad at file transfer.

Probably not everyone experienced the slow speed that i experienced when they did copying files via Mac Finder, which is probably because the link between their Nucleus, NAS, and computer is completely wired, or through very strong mesh routers. Unfortunately, although the connection between Nucleus and my NAS is very strong, the link between my Mac Mini to these audio gears is remote and weak, so I experienced longer wait time than normal. However, I could not run an ethernet cable this way due to some limitation here.

Ryan, the Nucleus is a Music appliance - not a general purpose computer. The only way files can be transferred to the internal drive of the Nucleus is over the network - either from a PC or Mac to the Nucleus, or from the Synology NAS to the Nucleus. It is not possible to connect the Nucleus directly to the NAS via USB and transfer files to it as though is were an USB Drive attached to the NAS.

I’m surprised that copying files from the NAS to the Nucleus is so slow, given that both are on a wired ethernet network. Then again, I’m surprised that you are using Cat8 cables. Category 8 is designed only for data centres where distances between switches and servers are short. It is not intended for general home or office cabling. Personally, I would use Cat5 or Cat6 - anything more is not necessary, and may in fact cause issues, I believe. See Wikipedia for reference.

The alternative scenario for you would be to forget about using the internal drive on the Nucleus until you have a better network, or addressed the current issues that it seems to have.

Attach your USB Drive to your NAS and use the file copy of the Synology to copy your music files from the NAS to the USB Drive. Then take the Drive off the NAS, and attach it to the Nucleus. It will then be seen by the Nucleus. In Roon’s Settings > Storage screen, use the Add Folder function to add the root folder of your music files storage to Roon as a Watched Folder.

There are three clear advantages of using the USB Drive attached directly to the Nucleus in your case:

Thanks Geoff. I probably did not explain my situation well. I was not trying to connect Nucleus to Synology via USB cable. I understood that would not work. My Nucleus is wire connected to the same network switch that my Synology is connected to, so they are both using ethernet cables into the same hub. The problem was, when I used Mac Finder to see these two folders and send “copy and paste” command, it is using smb protocol and data from Synology did not go directly to Nucleus (the shortest route and strongest connection), but instead come to my remotely located Mac Mini via WiFi before going back to Nucleus. This is an unnecessary route, but Synology told me that this is how smb works when the command comes from a Mac or PC over the home network, not directly inside Synology. Understood if my Mac Mini is hard wired to the home network, or i have a strong mesh network at home, this extra round trip travel of data would not be such a big deal, but it is still not as efficient as going direct between the two via ethernet. 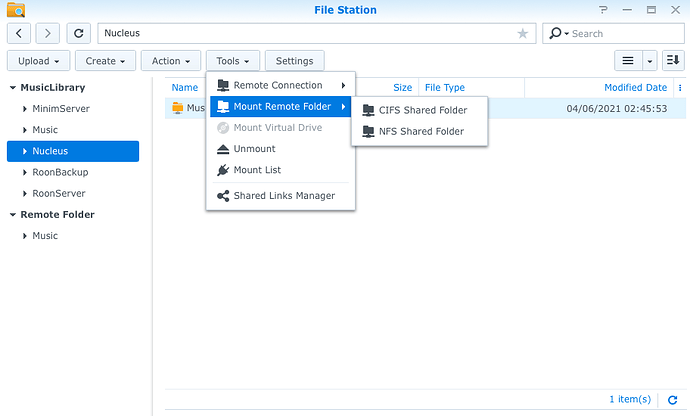 Fortunately, after a gentleman in another thread mentioned to me that he was able to mount Nucleus in his QNAP file management app and do copy and paste within that app, I finally found a way to mount Nucleus inside the Synology File Station app using CIFS protocol (screenshot above). After the mounting, copy and paste from Synology to Nucleus became super fast. 500GB was transferred over to Nucleus well within 45 minutes. I believe since the “copy and paste” command was initiated in Synology, the data went directly from Synology → ethernet cable → network switch → ethernet cable → Nucleus. My Mac Mini and my weak home WiFi network was completely out of the signal path. Making Synology to talk directly to Nucleus is so critical here. Not sure why Synology tech support did not teach me this when I was on the phone with him yesterday. I am so glad that this is finally figured out.

For your CAT8 comment, this is interesting, and I will look into it. From the connection standpoint, these CAT8 cables have not given me any trouble since I bought them 2 or 3 years ago from WireWorld Cables. It is true that no audiophile cable companies make CAT8 ethernet cable at the time (CAT8 was not even officially certified when I bought these

) or even now. I got it because I thought faster speed and better shielding would not do any harm. Later i saw that CAT7 and 8 both include grounds or something like that which could potentially affect sound quality. However, from the sound quality perspective, I a/b tested these CAT8 cables with AQ Vodka ethernet cable and a Transparent ethernet cable that I borrowed from a local dealer. These CAT8 cables bring a little more transparency and details than the other two, but overall on par. But these CAT8 cables were cheaper than those i tested. I can revisit this if CAT8 does harms to SQ in theory. My system has improved from 3 years ago, another a/b may give me different results.

Thanks Ryan. Just one thing, CIFS is just an implementation of version 1 of the SMB protocol, so they mean, for all intents and purposes, the same thing. More info at Wikipedia here.

Oh I see, thanks for letting me know. So it sounds like smb protocol itself did not cause the issue for me, but where the copy and paste command was initiated matters and dictates how far the data travels. Good to learn something new everyday. Thanks Geoff!