I’ve been using roon on a PC to build my library (CDs ripped with dBpoweramp) many attributes were edited in roon as I built the library. Once I was happy with that, I migrated to a newly purchased nucleus. I followed the migration procedure with the following notes:
(1) I transferred the database (backup) from the PC to nucleus with a USB HDD,
(2) I used the SMB connection option (with TeraCopy) to transfer audio data - after transfer both the PC roon and nucleus indicate 9899 tracks,
(3) I missed the step to suspend roon server software before transfer audio data.
(4) I can play all files from nucleus to the S2 DAC via USB and also to the iPad used as a remote.
Problems -
(a) Albums did not transfer with all info intact esp album artwork is wrong in some instances and it looks like most album version descriptions are missing in nucleus.
(b) When I look at settings->storage I see Nucleus Internal Storage but there is a message in red below the path " This drive is not available. Check the drive or edit this folder if it has been moved" If I try to edit the path ( Choose music storage folder ) nothing is populated the only option is to add network share.
Most concerned about (a) since a lot of time was invested setting up library but would also like to rectify (b) - Thanks in advance

Do you have an internal music drive in the Nucleus? What do you see on the web interface? Does it show the internal drive?

It should look something like this if you have an internal drive: 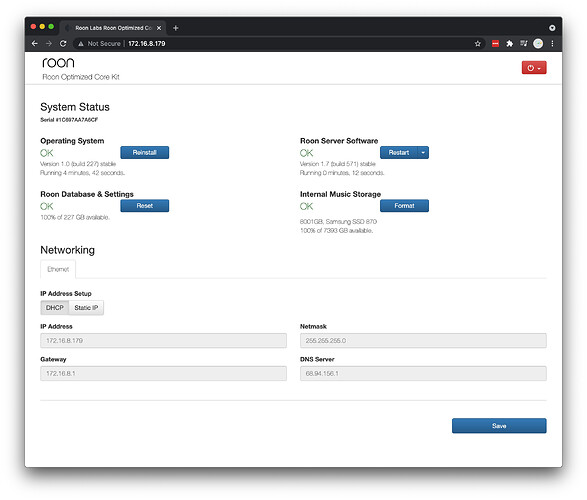 You’ll want to get that working first. Once you’re 100% sure that the storage is there and that all of the music files have been copied over, do another database restore.

Thanks for your response David,
Yes, the nucleus was purchased with 1T ssd pre-installed. When I first powered up the nucleus and looked at the Web Admin Interface that drive was indicated as “OK” and still is indicated as “OK”. The other four status indicators are also “OK”. “Internal Music Storage” appears to correctly report “47 % of 924 GB available”.
Note I am able to play my library from the nucleus w/o difficulty.
The problem is : The indicated path in the “Storage” screen is incomplete ( Nucleus ->Audio_Data->Files_for_Roon ). There are two sub-directories in" Files_for_Roon" that are not being displayed.
The message “This drive is not available. Check drive or edit this folder if its been moved”. When I try to edit, the “Choose music storage folder” window is blank.
I can see the two “missing” folders when I look at the nucleus over the network with a PC using \NUCLEUS\Data\Storage\InternalStorage. This is concerning since I’m not able to edit the path with roon - I may want to do that in future.

Are you able to attach some screenshots of what you are seeing? I’m not able to visualize what you mean by “Nucleus ->Audio_Data->Files_for_Roon” or where you are seeing this (Roon UI, Web UI, macOS Finder, Windows Explorer, or somewhere else).

It might be because any drive which is added as a Rock/Nucleus internal data drive is automatically entirely watched by Roon. This is one reason why you should not make a backup to that drive, or, use it as a “file server” to store other stuff.

Greetings - Here are two screen shots of the roon UI from an iPad used as a remote. I cannot see the folders that contain the wav files that are on the internal ssd of the nucleus. roon can see them since I can see the associated albums in album view and I can play them. Any help is appreciated 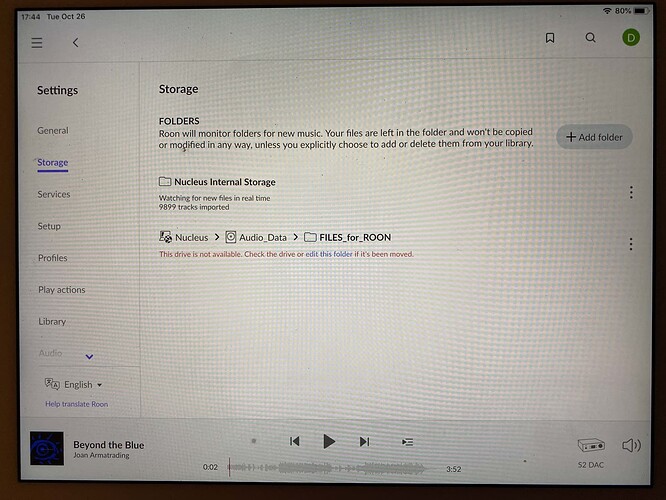 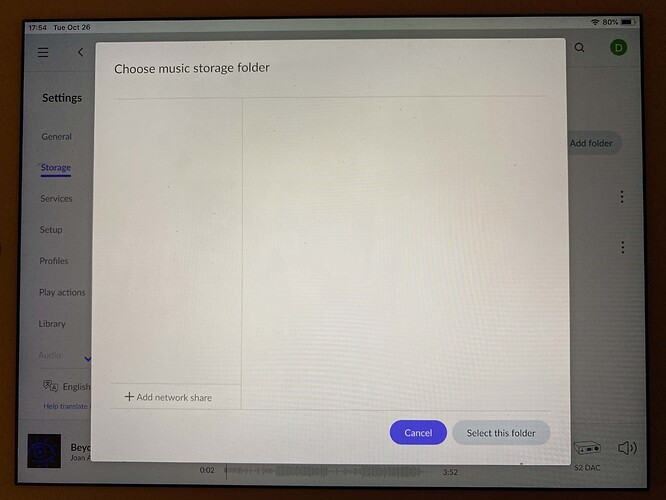 Were your files originally in Files_for_Roon?

As a test, disable the Nucleus Internal Storage. And then click the blue “edit this folder”, and point the old storage location to the new Storage location.

As a reminder - the audio files were originally transferred to roon via Ethernet from the PC I used to create the library -
“I used the SMB connection option (with TeraCopy) to transfer audio data - after transfer both the PC roon and nucleus indicate 9899 tracks” Note I could see the entire file structure over the ethernet connection with the PC.

I tried your suggestion above but when I Browse under the “edit this folder” there is still nothing populated in the “Choose music storage folder”. This is after disabling Nucleus Internal Storage ( confirmed with “Disabled” in red message displayed )

We’re terribly sorry that we didn’t see this until today…please, accept my deepest apology for the almost one month long delay…

Before diving into suggestions, I wanted to see if anything has changed in this time? How we can help best

No, nothing new to report. I would very much like to have a resolution for the two problems ( see “a” and “b” above ) I encountered when I set up the Nucleus. As far as how to help best, I suggest we look at one problem at a time. The order doesn’t matter much to me.