Purchased the nucleus V2 last week, installed a 4tb SSD drive and migrated ~45,000 files. installation and migration was problem free. It has performed perfectly. Roon reported about 80 files were corrupt (which they were). Some of my DSD file formats were not supported by Roon. I previously ran a 2011 mac mini core and the nucleus is much faster and connections to the iPad are quicker and smoother. I like the fact that I do not have wake the mac anymore and then wait for the iPad to find the connection. My main dac is out for service so I am using a AudioQuest Cobalt and it sounds surprisingly good. I think the nucleus sounds a bit better than the mac with the cobalt but it may be the better function that colors my perception.

I have had my Nucleus + for about a month and just finished ripping my CDs. I did about half with the nucleus + with an LG disk reader I got for this purpose. Shortly after I began I also started to use my iMac Pro with a super drive. The reason for this is that often the Nucleus software would not be able to identify tracks that the JRiver Media Center could on my Mac. Other than that, the process of ripping on the Nucleus Plus was quite good. I don’t like that I can not find a way to create filters based on subdirectories (e.g., CD-Rips) where my CDs are on the internal SSD, as suggested by the instructions. I will find a work around, perhaps with tagging.

The sound using DSD files is just stunning. The Nucleus + is connected to my Chord Hugo TT2. I have also set the system for upsampling based on some recommendations the people that sold the gear to me made. For the most part it is good. When playing back CDs it helps but many of the CDs with my combination of equipment sound very harsh. This is probably due to the fact most of the recordings are at least 30 years old. With DSD the sound is smooth and full, very nice.

Is Roon going update the manual for V2 ? Are the two HDMI ports for audio only out or does one of them do video for menus or album art ?

Both do audio, none do video. This was a very minor revision, but we should modify the manual. I’ll get it done.

I wish they had put an upgraded USB interface in the V2 similar to what Project did with their Stream Box S2 Ultra. Maybe in V3 ???

I have an update to my early comments. The reason I purchased a Nucleus + over a Nucleus was that I wanted to upsample. I have found that while the system seems to play back DSD 256 fine, It will not do DSD 512 at all. To me the most important failing is that it will not upsample DSD 128 to DSD 256. This is pretty consistent. The data is coming from an internal SSD that has been recommended on this forum. Here is what it looks like as things break apart. 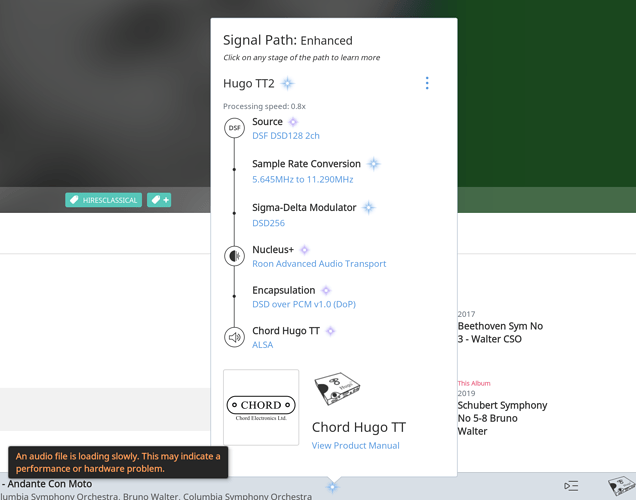 I am pretty disappointed, especially since there is nothing to do except give up on upsampling from 128 to 256.

Do you have “Parallelize Sigma-Delta Modulator” enabled in the Sample Rate Conversion settings? If not, try enabling it to see if you’re able to get DSD256 upsampling to work.

Thanks very much for this pointer. No, I did not have it enabled. I will try that and get back to you.

Thanks for the great pointer. I made the suggested change and it works very well. This may be my imagination, but I think that the system sounds more open/airy/musical than it did. May I suggest that the default be to use multiple cores. Is there a reason it is not? Do the other settings make sense? 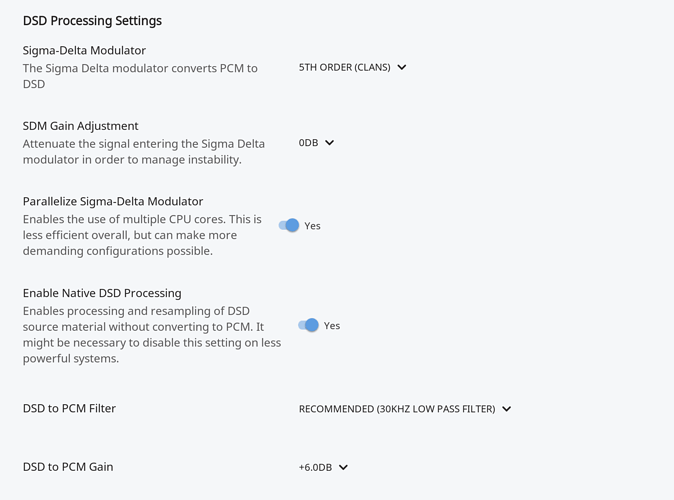 Follow up to original post. Tried many Dacs and settled on a chord qutest. Outstanding match for my system and best sound for the money in my system.