I just hooked up the Nucleus to my system consisting of an Auralic Aries, Kef Reference 1s, VAC Renaissance Tube Amps, Parasound P6 Pre Amp, Analysis Plus Oval 9s, a Canton sub and wow! What a difference! The Nucleus works so so so much better then my iMac as a core. I have never really posted on here before, and so I hope I’m in the right category, but was so impressed I felt compelled to leave a post. If anyone is on the fence about the Nucleus, get it. It’s pricey, but I am so happy with it so far.

It works so much better in what regard? Nucleus or Nucleus Plus?

@Michael_Lawrence Congratulations, nice setup - how about posting a pic: Showing (off) your Roon setup - description and photos ? Enjoy the music!

I just have the Nucleus (not the plus). I have had my pre-nucleus setup for a while, so I’m very sensitive to it, and before getting Roon, I had been using the native listening app that comes with the Auralic streamer called Lightning, which isn’t ideal, but the sound was great. I went over to Roon after my free trial because I just loved the interface and could integrate some of my other all home audio into it (i.e., Heos, apple, and Sonos which I use for different zones in my house), but the sound suffered a bit, and I couldn’t figure out why. It was a little brighter and messier, but very subtle. The only change I had made was switching to Roon and using my iMac as a core (instead of just using the lightening app). Since I switched to Nucleus, the over-brightness is gone, and the flow is a lot more seamless. Also, just little things like I don’t have to remember to wake up my computer/core when people are over, there’s no more searching for the core, everything is faster on load up (I had been using my leisure iMac computer as my core). Anywhere from adjusting the volume, to switching songs to loading playlists is much much faster and responsive. Finally, it’s hard to describe, but the music just sounds better. The Nucleus is pricey, so subtle gains might not be worth it, but I have invested a lot in my sound system (for me), so part of it was also just deciding to get a dedicated core designed by Roon to be one thing dedicated to my serious listening sessions (when not listening to vinyl), for whatever that’s worth. I hope I wasn’t too esoteric in this response. I am just extremely happy with this purchase, which I agonized over for the past 4-5 months (which I’m glad about since they just updated the Nucleus in August). 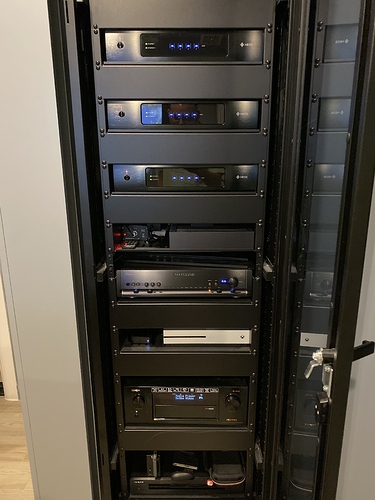 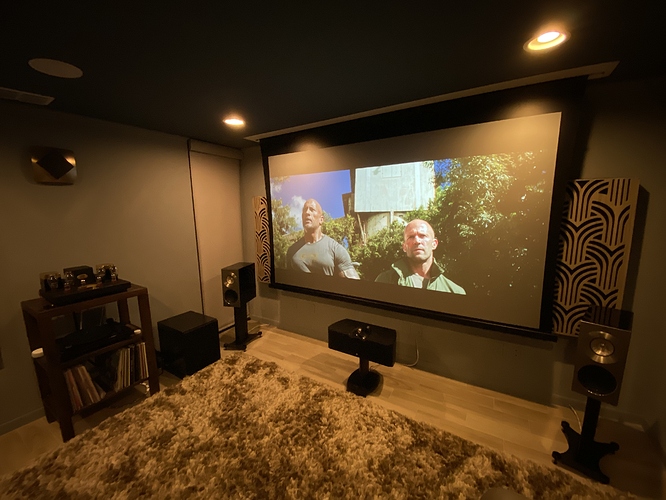 I’m not sure I uploaded these right, but here you go. It’s a dual theater and 2.1 system. I use the Parasound for my 2.1 listening which allows a bypass when I want to watch movies.

Thanks. I’m thinking about getting a Nucleus in January when I have to take an IRA RMD. I’m not expecting it to sound different (how could it), but I just want to get Roon off my laptop.

I used Roon on a free trial a couple of years ago, using my HP i3 desktop as a core. I loved the concept, but it was quite slow and cumbersome, so I passed on Roon at the time.
However, I ‘bit the bullet’ this year with a Nucleus, once Roon had integrated Qobuz, and I haven’t looked back.
The Nucleus is simply awesome in use, and reacts as quickly as you expect/need it too.
I know building a NUC/ROCK is much more cost-effective, but the Nucleus ‘just works’ as a perfect turn-key product.

Exactly. It just works. Since I bought the Nucleus, I never have that anxiety when I sit down to do some serious listening of “is it going to give me a problem.” It just works, which is the highest kind of compliment you can give to an audio component like this.

How do you like Qobuz? I use Tidal, and I’m happy with it, especially since they introduced the Masters, and since I use HEOS for my whole house audio, I’m not sure I can ever completely abandon Tidal (unless Amazon Hi-Fi music turns out to be better and gets integrated with Roon).

I prefer the sound of Qobuz, finding it clearer, more detailed s natural - not a fan of MQA. Tried both for a few months then just stuck with Qobuz

How is the Heos Roon interface… is it strictly Airplay?

I use my Auralic Aries streamer for my 2 channel and Roon listening, not Heos. My HEOS Drive setup is only for my whole house audio. I have 18 zones throughout the house and outside I use for entertaining, or cooking, or showering, etc., and that is through the native Heos app, not Roon.

Thanks I thought you had found a clever workaround. I am currently spending too much money adding Roon endpoints throughout the house.

I have 18 zones throughout the house and outside I use for entertaining, or cooking, or showering, etc.,

Thanks for not posting pics of your “shower rig”.