Odd issue of remote control indicated but nothing there

Logs have been sent to RoPieee HQ with unique identifier 3cbbeea57e2260e5

here is the roon extension showing remote is there but the device shows nothing. This is a RPI with IQAudIO DAC Pro Hat (playing) and USB connected DAC (off) at the time of feedback 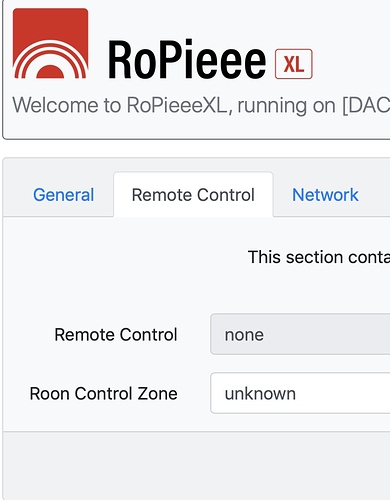 Do you have a usb ir receiver plugged in?

To clear things up your not trying to resolve an issue you are having but are just asking what it is?

Harry knows me better than that, while it’s not impacting operation it’s an anomaly that should not be showing in the extensions.

I suspect what @wizardofoz is saying is that there is no remote control plugged in, as confirmed by the web GUI , but yet there is an extension to enable in Roon settings. Normally this only applies to an install with the display or a hardware remote.

Yeah that was what I read, and obviously should not happen. It doesn’t do any harm, but it can be confusing.

Looking at the logs… it shows configuration settings for a screen. Can it be that this unit has been used with a screen in a previous life?

Not that I recall but maybe…would that do it? how would one reset that flag? If that’s it then probably an isolated case…I can cope with it there no issues.