Today I noticed that Roon was taking much longer than usual to do a scheduled re-index. It actually looked like it was performing a full ‘from scratch’ indexing cycle.

After it was finally finished, several album that have been on my NAS a long time appeared on the first page of the Pages view, with Sorted By Date Added as the active display mode.

Some of them even had the ‘blue band of newness’ that indicates new, never played albums: 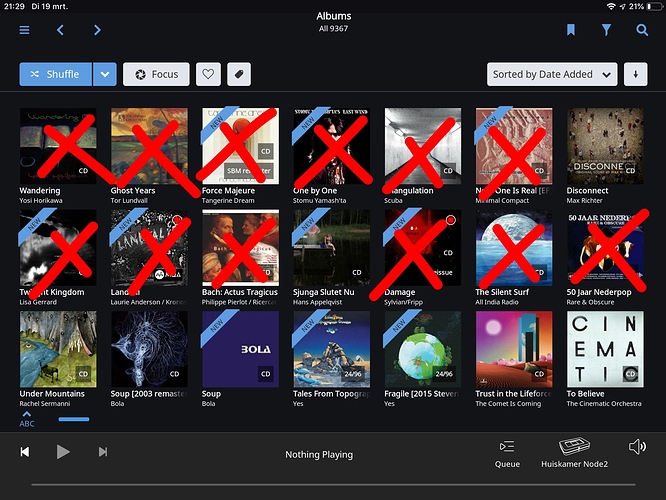 Nothing changed in my setup, I just added some new music today, like I do several times a week… Does anybody have any idea why this happens and if it is a harmless glitch?

If you look in that dates on the files themselves, outside of Roon, did the dates change?

Thanks for responding Dylan, my setup is as such:

Both connected to D-Link DGS-108 switch

The dates of these files on the NAS have not changed

Thanks for the setup details, @Max_Delissen!

If you add new tracks do you see similar behavior occur? Is this the first time you’ve seen this type of behavior?

It’s not the first time this happened. In fact, some of the albums that moved to the front have done so before, others did it for the first time.

In the meantime I have added four new albums and nothing similar happened. The ‘old’ albums that moved to the front stayed there, but they didn’t get company from other ‘old’ albums.

I can’t remember if this glitch has corrected itself on previous occasions. After a while, these albums will have moved several pages back because new albums were added, and I kinda lose track of them…

It’s not the first time this happened. In fact, some of the albums that moved to the front have done so before, others did it for the first time.

Moving forward with our troubleshooting, I’d like to enable some diagnostics on your account. The next time this behavior occurs (you navigate to the Albums browser after adding content and see old albums wrongly added as new) make a note of the time. Respond here with that time and your timezone and we will take a closer look.

I will, but in my experience, it may be quite a while before this glitch occurs again. Last time was probably over a year ago

Okay @dylan, you asked me to report back if it happened again. And it did, yesterday after I performed a reboot of both my NAS and the Mac mini that I use exclusively to run my Roon Core on. A Mac mini reboot always forces a re-index, and now I’m wondering if this ‘cutting the cue’ business may have something to do with rebooting my system and forcing a re-index that way.

Interestingly, some of the albums that moved to the front last time did so again, but some of them didn’t, and there was one ‘new’ old album cutting the cue. 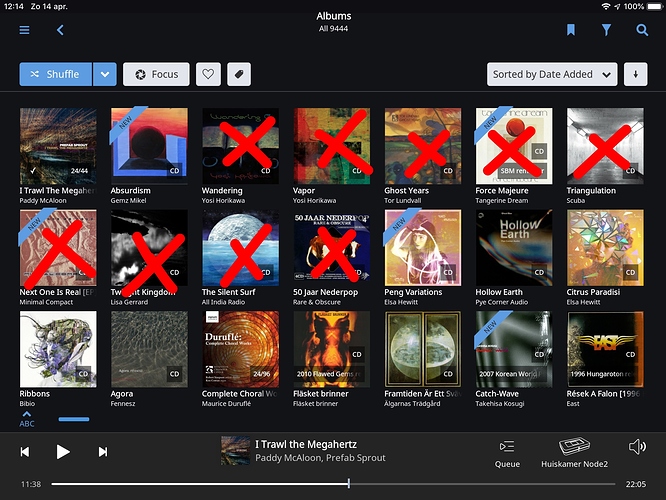 I spoke with the team about their analysis of the logs that you’ve sent over and I wanted to reach out with some followup questions that they have:

Hi Dylan, it appears that my answers to this last inquiry got lost somehow. I will summarise my last reply:

I really must emphasise that it’s not really a big deal to me. No files got lost, and my database is growing by the week so the files in question have disappeared into the background of my attention. But still, if there’s a glitch somewhere, I’d like to know if it’s just a glitch or a real bug, and what caused it.
And I think you would too

Thanks for the details here, @Max_Delissen. I’ve passed this all along to the technical team. I appreciate your patience and cooperation here!

The next time this occurs, can you share the same information as before (timestamps, screenshot) and then share with us the Synology System Logs. The team has been unable to reproduce this behavior and so they’re hoping that they have logs directly from the Synology will allow us to see if there is any behavior on the end of the storage device that explains why Roon is seeing these as new imports.

Thanks Dylan, I will do so, and thanks to you and the team for your efforts so far!.

Along the way I have developed a suspicion about the Synology as well. A year ago, I was working with Eric Stewart to solve a problem when my Roon setup appeared to be stuck in a re-index loop. In the process of solving that (successfully, I may gladly add) we discovered that there was an unknown Linux bug that changed filenames to a 8 digit code that started with the first letter of the original filename, and had an ~ at the seventh position (e.g. NSZEWW~A).

That same ‘re-coding’ has not appeared - as far as I can see - in the folders that got moved forward by Roon this time, but I thought I should mention it anyway because your suspicion is with the Synology NAS too now (and that is the only machine in this house that runs om Linux instead of MacOS or iOS)