Hi All. I am setting up an out outdoor garden system with two zones (deck + garden). They will be powered by a multi-zone power amp, on standby. These two zones would never be playing different music, but there will be situations when we want to use one zone only, but not the other. Since the amp will be out of reach, we will not be able to access the speaker switch. So we want to use the Roon zones as a sort of digital speaker switch. And I’m trying to avoid having/buying two individual endpoint units.

Thank you. Can i connect two drahonflies to one Pi?

Actually, doing a search in these forums i see that others are indeed using two dacs on one computer. If they are both running at once, would it not over-stress a Pi4 processor?

would it not over-stress a Pi4 processor

Not even remotely. Roon Bridge + RAATServer uses like 2-4% CPU when playing on my RPi4. So that’s 2-4% of ONE of the RPi4’s cores. It’s twiddling its thumbs.

well on a pi3 its a bit more compromised with USB and Ethernet sharing a bus but the pi4 should be fine.

I sometimes have 4 USB dacs and a HAT plugged in for testing things and all works well for rebook speeds 16/44.1 but your milage may vary (YMMV) if you wifi or higher bitrates.

sounds like you are not after hifi just some background music in open areas.

Ha. Will do! The setup I was hoping for was a HifiBerry with 2 x DAC+Pro’s on top of one Pi4. I run other Hifiberries so figured I would stick to them, not to mention the fact that they are decent DACs at just $50/ea. Just not sure if I can run two of those DAC+ Pro’s off the same Pi. I’m waiting for the HifiBerry people to respond, but wondering if you think that might be possible? And, are there any other DACs that you like around that price point of $50/ea?

Probably wouldn’t work as in ropieee you can only select one hat. Could be wrong

I do this with a Pi 3B, with DAC Optical SPDIF HAT for one zone with a USB DAC for the other (feeding headphones). Roon sees them as two zones.

Hey again. I noticed that Ropieee does not list the dragonfly as supported in its hardware list. I was also thinking to use a Schiit Modi 3. How else might I use these with a Pi, if not with Ropieee? Thank you!

It supports the Dragonfly. I use one with a Dragonfly Cobalt and battery power for a portable unit. 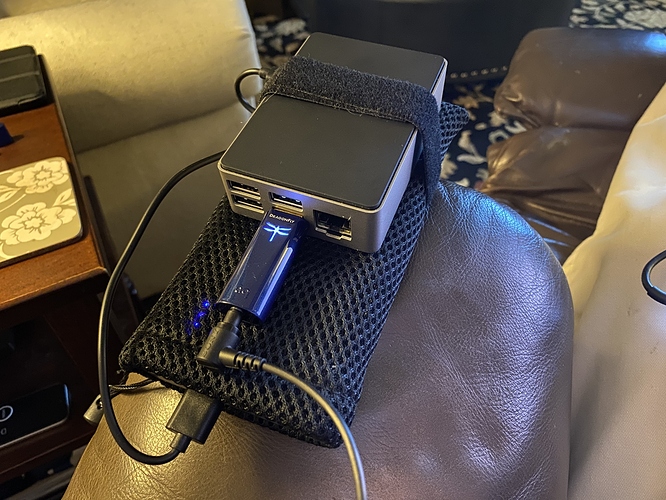 Related question: Has anyone tried creating multiple Airport/Shairport endpoints, from multiple DACs running off of one Pi?

Yes I think that works

Actually, I just found an extra USB cable and tried it. Unfortunately it only shows up as one Airplay zone, and defaults to one of them. The other gets no signal. Unless I have it setup incorrectly.

You’ll probably need some coffee for this one. Thanks a lot!

OK as per Jim in the other thread it looks like its only going to see the Ropieee and not the DACs for Shairplay.

Its the same for Spotify app too sadly