One particular recently added album refuses to appear in Roon Library/Album view, search cannot find it, even after removing it from the NAS, re-indexing, putting it back on the NAS with edited metadata and re-indexing.

Album does appear in the BluOS library of my Bluesound Node2 though.

Is it in skipped files?

Even stranger perhaps, this cd is part of a trilogy. It is the ‘instrumentals’ cd of Trentemøllers ‘Lost’ 3CD boxset album. The regular cd and the remixes were indexed without any problem.

I deliberately did not group them by adding the (cd1), (cd2) and (cd3) suffix, because I want to be able to play them separately without automatically segueing into the next cd.

Max: keep this collection as a trilogy. On the album view you can select the disc and then just play that disc (white triangle). If you click Play Now at top you get all tracks but use disc play options instead

Thanks, Dave, I have considered that as an option, and I may give it a try just to see what happens, but the ‘Reworks’ version of this album, with the remixes, is from 2014 while the regular album and the instrumentals both are from 2013. The ‘Instrumental Versions’ as it is actually called, originally appeared as a vinyl-only bonus album but became available through Bandcamp as a digital download.

If I wasn’t the autistic nitpicker that I actually am I wouldn’t have bothered and clumped them together just to get rid of this problem, but I am VERY ‘Sheldon’ about this

and I would always feel that something’s wrong with this album.

Y’now what? I’ll merge the regular album and the Instrumental Version and add the different album art for the instrumental version as a folder.jpg so it will appear in Roon as a second pic.

Interestingly, the title track in the pictured album randomly is unavailable via Roon/Tidal. It’s happened frequently over the course of many weeks. I can get the track to re-appear by applying different techniques: re-scanning the album, re-identifying the tracks, etc. Weird! 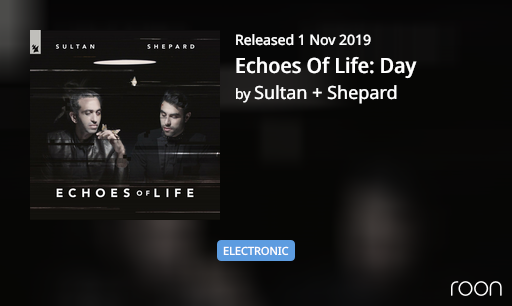 Adding the regular album and the album with the Instrumentals together into a (cd1)(cd2) item kinda worked, it appeared in the Roon library now, but interwoven with the tracks of the original album (so the album had 2 times track 1, two times track 2 etc.)

As it turned out - and in spite of my usual attention to detail - there were still some discrepancies in the metadata (I already kicked myself for that) so I had to do a manual edit to split the tracks into two separate discs. That’s when I found out that I had two different album art pics embedded. They looked exactly the same but had different sizes. Fixed that and did a re-index of the album. Artwork was still wrong after that (showing the black version of the Instrumentals album art that I added as a Folder.jpg hoping that it would appear as alternative art in Roon.)

Looking into that this evening, but satisfied for now. We’re getting there