Only primary version shows up in filters?

Hi, I have this issue: for some reason looks like only the primary version shows when applying filters. Use case (see screenshots below):

3 versions of the album: 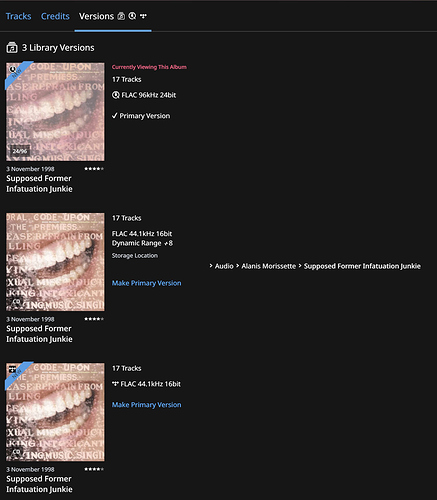 I remove the qobuz filter:

Because the primary version is the qobuz one, the album doesn’t show up anymore, despite of the fact that different versions of the album are also in my local and tidal libraries.

This is a very annoying thing for me, especially when trying to work with multiple format versions (if 24/96 is set to the primary version and I’ll filter by 16/41, the 16/41 version wont show).

Please consider fixing this. Thank you.

This is the correct behaviour since you have Group Alternate Versions enabled. If you want to see each release separately, go to the Versions tab, click the three dots, and select Remove from duplicates.

The correct behavior will be if I have 3 versions of an album, in 3 different locations, to see that album regardless of which location I chose, because, well, at least one version of the album is in that location… Instead roon only considers the primary version. And I want them grouped because is the same item (album).

You can’t group versions and then expect Roon to display individual versions at the same time.

If you set _settings > general > show hidden tracks and albums to yes, the focus will show the appropriate albums as if they were not grouped. They will still be considered versions and there will still be a versions tab.
However, you will now routinely see all versions in most listings which is probably not what you want.

That’s exactly what I expect!

True (thank you for the idea) but it will result in such a mess:

The stupidity of the and/or (semi)logic in filters will not help either.

Hello @occasionallyhere, I’m glad the community was able to reach out and help! Please let us know if you have any further questions.

Where do you see the help?

The explanation of how it works. Whether you like it is a different thing.