Option to group by file structure

Hi, I was wondering if it would make sense to have an option to group albums by file structure. I have found that many of my issues seems to stem from Roon’s mixing of tracks from different albums and as good as the metadata editor has become, it is still a time consuming task. Can we have the ability to select files and the have them grouped as an album? Or ability to override Roon’s grouping by checking say a “Enforce” file structure? Thanks, Hammer

I think that what you are asking for is already present in Roon.

Go to the Tracks browser, select the tracks that you want to group into an album, and click on Edit to get to the track editor, then click the Group Tracks button: 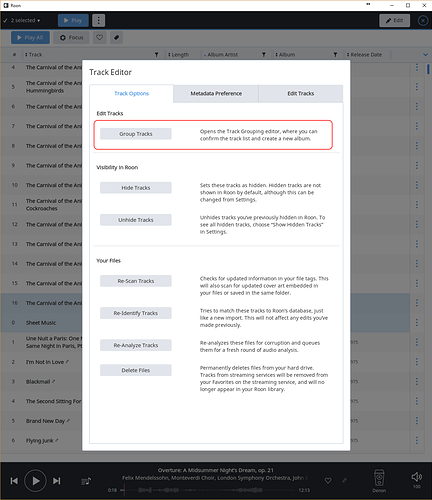 This is close - what I mean is select actual files from my file directory and group them vs. selecting tracks in Roon. The reason is because for multiple versions of same track, it’s hard (yes, I know it can be done) to know which track is from which directory. I find that sometimes Roon will pull a version of the same track from a different album and group that track in the album. For example, I have the song Avalon in a greatest hits album and the same song in the original album. Roon place the version of Avalon from the greatest hits album in the original album. This could be easily fixed if there is an option in roon to never mix tracks from different directories into a single album.