I would love to see the option to list musician credits in the interface per track and not just per album.

I’m a jazz fan, and have all my files tagged with every musician who played on a track. This would mean that I can see, for instance, that Wynton Kelly played piano on “Freddie Freeloader” from Miles Davis’s “Kind Of Blue” but that Bill Evans played piano on the rest of the same album. I could do this on MediaMonkey (see attached screenshot)

Capture.JPG1164×434 63.9 KB
, and it meant that it was easy to jump between different performances by the same musician while still seeing the actual tracks they’d played on. Right now, Roon just lists both performers under piano in the Credits for the entire album.

I recognise that this would be overkill for many types of music, but for jazz (especially) it would be hugely useful as the personnel varies so much and there’s so much cross-cooperation so it should probably be an option rather than a fixed setting, if it’s at all possible. I also recognise that this per-track metadata may not be available from your data providers, but it would be lovely if (at very least) the Roon interface supported displaying & editing the musician credits metadata oneself.

@Paul_Clancy This is something that I very much want too, and I now own metadata from a development perspective…

We already have the mechanism for per track credits - have you spotted the “CD case” icon in the track listings? 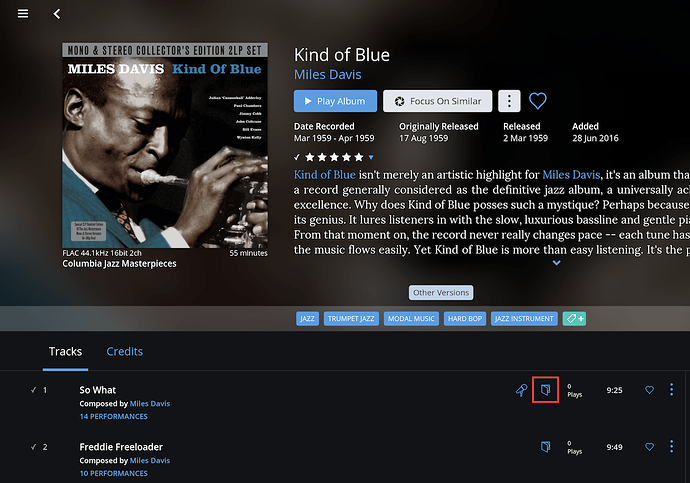 But, as you’ve stated correctly, population of track level credits depends completely on the quality of the metadata either at source or, potentially, from your own file tags. I’m finding the metadata are poor in this regard from the major providers (track composition data is good, but track performance data is not).

I’ve only been at Roon a month and I’m not sure if we pull artist/performer/composer/etc. tags into the track level credits at the moment, but if we don’t then I think it’s something we need to consider, albeit possibly within the constraints of a defined set of supported tags and tagging recommendations.

I’m not sure if we pull artist/performer/composer/etc. tags into the track level credits at the moment,

Thanks very much for your response, Joel. I appreciate the difficulties involved and look forward to seeing how you approach this.