Request:
I’d love the ability to name individual discs in a multi-disc set in addition to having the disc number. The name should be accessible via search, and displayed in the Discs dropdown on the Album/Tracks list.

Reasoning:
Many boxed sets are repackagings of discrete albums or multi-disc albums with various different themes (ex: Disc 1 being the studio album, Disc 2 is the Live album). Currently, Roon seems to allow only numbers for discs, which causes ambiguity and confusion when locating tracks via search, or even when visually scanning the set in the default “all discs” list.

Currently, in Roon, If I wanted to listen to The Truth the disc, I’d have to remember that it’s the 4th disc in Crystal Ball. I can’t search on it, as it will only return the track named “The Truth”. I can then click on the album listed, but it takes me to the Crystal Ball “All Discs” list. If I want easy access to The Truth I have to separate it from the album it is canonically a part of, and that kinda sucks.

According to Roon, I don’t own anything called any of those titles, which totally goes against my mental model of what I own. This also kinda sucks.

Thank you for your consideration.

For your first example if you use the classical Roon Work tag to name your cds and duplicate your track names as classical Roon Part tags you will get exactly what you want. You have to do a bit of meta date Kung fu to add these tags but it would look like this:

You would have a single artwork for all the discs which is appropriate in this case.

In your second case it would be better to break them all into individual albums so Roon could identify them as such with their own original artwork but add an album RoonAlbum tag to all tracks identifying them coming from the Original Album Series Box Set so you can see that is where they came from. It would look like this: 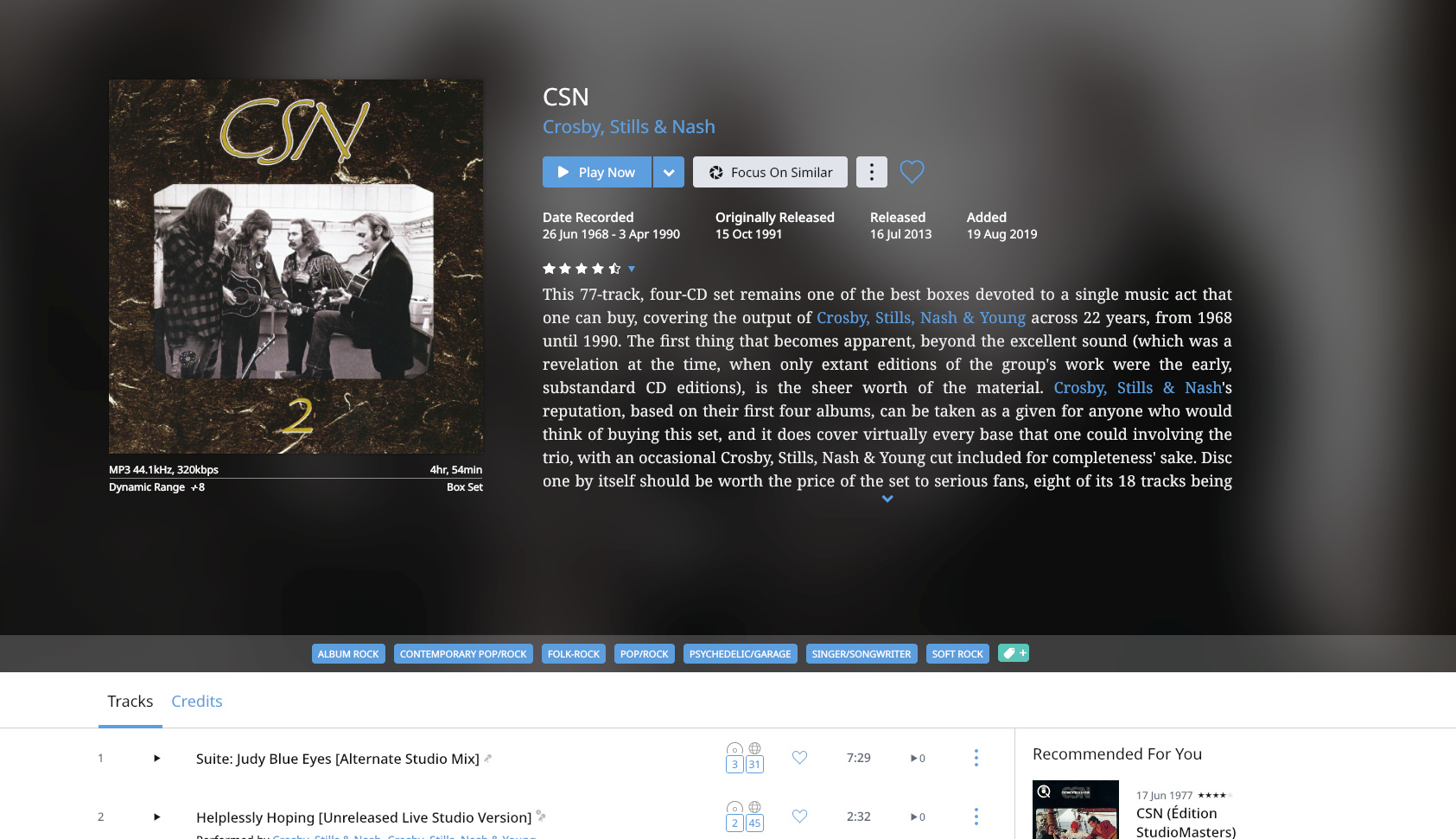 I used RoonAlbum tag to tag the CSN tracks as Box Set.

Takes some work to do this but would fix your issues IMHO.

Well said ! Last count I had around 350 box sets so I feel your pain

It’s been a long standing niggle, there is (are) feature request(s) in for this from way back.

1.8 addressed a specific Classical need by beefing up Focus and Filter for specifically Classical albums/boxes but the Sub Title issue is still valid. The improvements won’t help your use case

I moved my big boxes out of Roon some years back as I can manage them better and more easily navigate in JRiver where I can define Custom Tags to cover things like Box Set, Disc Name and even DiscVolume where a big box is split into sub boxes

At a guess the request is around 3 years ago. If you want there is a big thread, search my name and box set !

PS one hint, if the box is a collection of actual albums you could split them out as individual albums then create a Roon Tag to hold them

yeah, that seems like too much of a hack, and the metadata for the tracks’ parent disc name is already ‘correct’. Just allowing named discs (or at least picking them up from the folder name initially) would be cleaner.

Because Example 2 literally adds nothing except a bundling, I wound up cracking them into their component parts and using a personal $BoxedSetName tag. In this case, I never want to listen to all of them in their boxed set form – it was merely a convenient purchase.

If you can split that’s first prize but a lot of back catalogue releases eg Philips DG etc add value by padding out what were LP releases with extra tracks making a CD that was never actually released . UGH

I have requested Sub Titles (call them what you will) for years to no avail.

If your taste is Classical the improved Focus and Filter on an album helps find a Composition within a box. Make sure the Genre includes Classical as this seems to be needed for it to work