@support I have a lot of different variants (equivalents) of this artist in my library. But none of them are linked together or seem to point to an artist with a bio and a pic.

I would like to standardize. What does roon use as a default that does point to an artist with a bio and a pic?

I think you are looking for Rome Opera Theater Orchestra & Chorus . There’s a bio there, but no pic in Allmusic.

Rome Opera Theater Orchestra and Rome Opera Theater Chorus are currently the primary names of these ensembles. I say currently only because the metadata are produced automatically from various metadata sources (which could change without our knowledge – x million artists, etc., etc.). I would expect these names to be pretty stable though.

I had a feeling you would say that as the names follow the same pattern as the other big opera orchestras. However, in this particular case, Rome Opera Theater Orchestra links to no bio and no pic and Rome Opera Theater Chorus links to a bio but no pic. I don’t know if this can be fixed in metadata?

Maybe there is something a bit more general here. In meta-data the opera orchestras often do follow the pattern “Rome Opera Theater Orchestra & Chorus”. But that pattern rarely has either a bio or a pic and it often also creates duplicates because there may also be one or other of the (many) original language equivalents and also one or both of the “orchestra” and “chorus” forms. The benefit of the split orchestra and chorus forms is they usually (though not in this case) will link to bios and pics.

To tidy things up I normally find myself deleting the joint “Orchestra & Chorus” form and splitting it into two “orchestra” and “chorus” artists so that way I can end up with something like this: 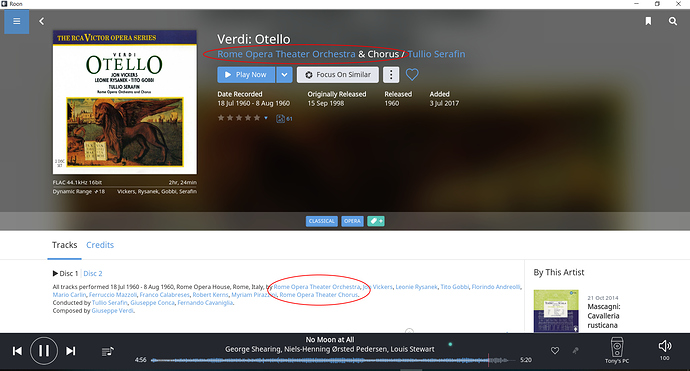 Would it not make sense for roon to make this splitting behavior the default? At the moment roon is a bit half in half out and I often find myself post-editing opera boxes in his way.