I am one of the minority that has a lot of digitalized singles and EPs. Currently I do not include them into my Roon collection because they simply blow up my artists and my albums list. Being a browsing / cruising user through my collections (as I would have done with my vinyl collection where there is no search button) I require album and artists lists that are not too crowded even with > 1000 albums / singles.

First, there currently is no way of grouping singles / EPs into “virtual albums” in order to group them for the albums list (which would be unneccessary if there was a singles list).

Second, I did not find any way to reduce the “artist” information. I do not want to have 3 different artists like “Frank Zappa”, “Frank Zappa & The Mothers” and “Frank Zappa And The Mothers Of Invention”. In ID tags there is “Album Artist” and “Artist” and I can play with this information for first sight information reduction and second sight information availability. This would be great for Roon as well, especially as this becomes worse with including singles with their potentially large combination of artists working together for one song.

Keep up the great job,
landogarner

I agree here more or less. You have the possibility of grouping a singles group by identifing them as Single or EP (Album type). But when there is a single in various editions, than you lose the overview.
Some artist have different track lisitngs for 1 title. a 7" single, a few CD-singles with various extra tracks and a 12: version. I want to have them grouped per titles, but quickly see which versions of tracks are availaible for the single.
If you group them you have to open them 1 by 1, and when searching in the “All TRacks” listing you only see the title tracks from the primairy single.
Would love to have only one version of the single in the overview, and when clicking a title to have all versions displayed in a new page. I would also like this for albums of different edition, in my radio list I want Roon to pick only main album tracks, so I usually prick an album without bouns tracks as Primairy album and the other version(s) as duplicate, but the makes it hard to find bonus tracks or see quicly what is the difference between the album versions (including Tidal albums that sometimes have bonus tracks but now are not visible to notice.

I am one of the minority that has a lot of digitalized singles and EPs. Currently I do not include them into my Roon collection because they simply blow up my artists and my albums list.

If you set albumartist the same across all Zappa albums using a tag editor, tell Roon to prefer your metadata and then rescan these files they’ll appear under the albumartist you’ve configured.

Evan, this is exactly what does not work.
The albums still appear the wrong way although the metadata is set correctly. There is a second line of artist names that I seem to be unable to access and modify. Maybe this line does lead to the appearance of “Frank Zappa & the Mothers of Invention”? Thanks 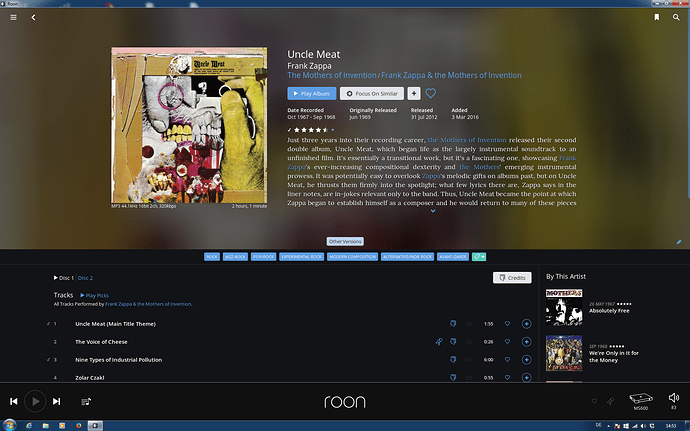 Yes Evan, but I’d rather have them in a separate collection called “Singles” to take them away from the albums where the large variation of artists is only creating a mess. The separate presentation is valid if you pick the artist and then you see his singles. It would be nice to have a “Singles” collection where the singles are treated the way albums are treated (all tracks on that single grouped to that specific single) and where custom views of the singles collection could be made like

or similar. I will think some more about the perfect way to do it and make a proposal…