Not very impressed with the ease of set up. Entire iTunes library is saved in AIFF file format on a hard drive that is connected via a wireless router. Was able to network to the drive with a little hep from a fellow ROON’r but at first attempt only imported 97 out of 4,000+ files. Subsequent scans, system reboots and server reboots only netted 1297 out of 4,000+. All skipped files are I/O Failures… That was yesterday and about 3hrs of my time.

Today, I thought I’d listen to a few tracks that I was able to import, only to be hit with Transport: Failed to load media and Transport: Too many failures. Stopping playback errors. Don’t have the energy or time to continue trying to hunt down solutions in ROON support. Does anyone have a quick fix. ITunes is frankly looking more and more like the better solution.

Thanks for reaching out, @Scott_Harrison, and apologies for the difficulties here.

First, may I ask that you please provide a brief description of your current setup using this link as a guide.

Next, so we can gain some additional insight into what you’re experiencing, please verify the following:

All skipped files are I/O Failures

Today, I thought I’d listen to a few tracks that I was able to import, only to be hit with Transport: Failed to load media and Transport: Too many failures. Stopping playback errors

As of this afternoon, I was able to import 1393 files out of approximately 6,000 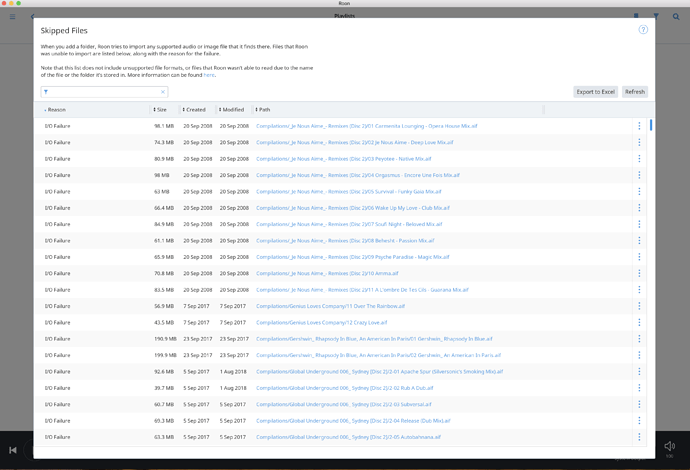 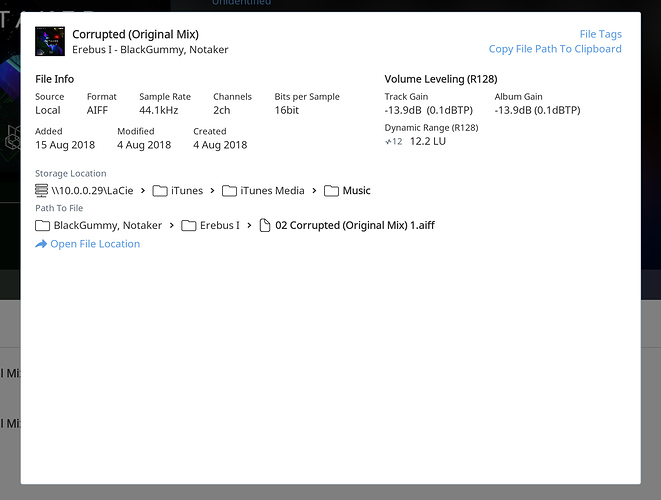 Thanks for the info here, @Scott_Harrison, I appreciate that!

The I/O Failure error that you’re seeing in skipped files indicates that there is some trouble reading the files from where it’s stored. Sometimes this can be due to hardware problems, and other times this could be due to networking troubles.

Is the MacBook connected via WiFi? If so, can you try connecting via Ethernet and seeing if there is any change in behavior here? The MacBook may be having difficulties communicating with the drive attached to the Airport Extreme and an Ethernet connection should help.

I’m interpreting from your thread title but it is $119 a year not a month. Assuming the /mo refers to a time period.

Not to get in the middle of an active tech support issue, but judging by your network setup, I’d be looking seriously at putting your files somewhere else. The Airport Extreme has always been a solid product. I’ve had several and still have a couple in production, including the most recent 6th generation tower model. But I would never use them for any kind of serious file service.

Even if you making sure that you are using SMB protocol and not AFP (which is deprecated), these devices primary file serve mission is to do Time Machine backups (at a leisurely pace) and the occasionally transfer of files between machines. Yes, you and others have used them for iTunes file repositories over the years and that’s probably ok (and Apple tests for this). But the processor power these units have is pretty small and you may be outstripping what Roon is asking of it. And the files in question are all uncompressed AIFF files so they aren’t small by music file standard. Also, you haven’t specified which Airport Extreme you are running. Any model made in the last decade from the 1st generation to the most recent discontinued 6th generation has 5 GHz capability. I wouldn’t ask my 6th gen Airport to do serious file service but the older models are much slower.

If you want to determine if the Airport is the problem, disconnect the LaCie from the airport and plug it into the Mac. Then try to build a Roon Core as a test case. If that works, then you know your problem.

I’m interpreting from your thread title but it is $119 a year not a month. Assuming the /mo refers to a time period.

Yeah, I took the liberty of changing that, for clarity’s sake.

The Airport Extreme is not being used for any type of backup, however, I will try connecting the USB drive directly to the MBP to see if that improves the I/O Error issue. Thanks for your input.

…and yes, thanks for the clarification on the yearly vs. monthly cost. That was my mistake.

One other thing you could try before disconnecting the USB drive is just to hooked up your Macbook Pro via a wired Ethernet connection directly to your Airport Extreme and see if that works. (Make sure to disable Wifi on the Macbook Pro). If that works, then Roon is having Wifi issues on your network and the Airport itself would be fine for a Roon SAN storage device since the issue wouldn’t be file service. If it still craps out, then try plugging the LaCie directly into the Macbook Pro and seeing if that works.