Overnight 4/23 nucleus can no longer connect with any remotes

As of this morning no remotes can connect with nucleus. Turned Nucleus off. Then rebooted. Reinstalled Roon software. Remote finds nucleus initializes it and attempts to connect with no result. Nucleus appears to be bricked.

James, are you able to connect a monitor and keyboard to the Nucleus, or alternately type http://nucleus.local or the Nucleus’ IP address in a browser to check its status?

If I use Safari it says that Safari is unable to connect to the server. Regardless of the remote I use if I use find core it discovers the nucleus. The nucleus is initialized. The ready button is activated. But when you push it the connection fails after repeated attempts.

If this does not work, can you share any screenshots of what you are seeing? I don’t use a Nucleus so I may be of limited assistance, but it’s odd that the Mac cannot see the Core via its web interface. Are all devices (Core and Remotes) running Build 931 to ensure they are in synch?

The network connection LED on the Ethernet output on the back of the nucleus is amber if that means anything. I typed in the nucleus address in the browser but the remote was just connected by Wi-Fi and it just said that Safari couldn’t connect to the server. Later I will try to navigate directly to the nucleus with a computer that is connected to the LAN via Ethernet. That should give me another clue.

Yes the green light flashes I presume indicating data transfer. I don’t believe anything changed at this end overnight. Not so certain about Roon which seems to be in a state of constant flux. Although I have learned that over time most of the missteps are corrected.

So last question for the night. Can you connect a monitor to the Nucleus HDMI port and a keyboard to its USB port and determine if it is operational or what it is showing on the screen?

Thanks for your time tonight. Yes, I can do that but it will need to wait until tomorrow morning. Can you give me some idea what I will be looking for?

If the Nucleus is working correctly, there will be text on the screen that tells you what its IP address is, and when this is entered into your web browser, you should see the Web Administration page of the Nucleus.

Seeing the following screens (and not being able to progress
from there) are signs of a failing SSD in your Nucleus: 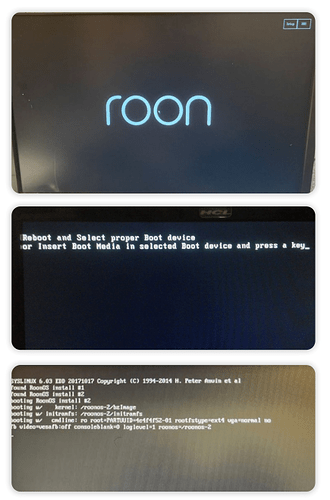 Thanks. I get the System status page where it tells me everything is OK. Which is nice

I am reinstalling the operating system and restarting Roon server software.

Still no luck connecting with any of my four remotes. An I-Mac a PowerBook an I-Pad and an I-phone. Although there was an update of iOS the night this happened it doesn’t explain the failure of the computers that weren’t updated. There really doesn’t seem to be anything wrong with the nucleus. I know these things can happen but it would be a major disappointment after only four months and all the work required to build the library.

Are the remotes on same subnet as the core ?
Can you access webinterface (http://nucleus.local) from one of your remotes ?

Yes I can access it from the I-phone I’m using now.

Well that was yesterday. Can’t access it today. However when I use my ISPs app to check the network it finds the nucleus and says that the Ethernet connection is good. From that end the nucleus appears to be fine. Although it makes little sense to me I’m left with the feeling that something that either Apple Roon or Comcast did the night of 4/22 is responsible. Not sure how or if I can undo whatever that was.

Well after wasting the better part of the weekend going through the new OS privacy features and their implications as well as testing various aspects of my router and LAN I am left with the impression that the update of the Roon server software on Friday is the source of the problem. I reinstalled it yesterday

Don’t believe there is much I can do about that.

James, is your system working again now after you reinstalled Roon on the Nucleus?

Nope it’s not. I don’t think it likes the latest version of the Roon server software.

So just to recap,

I can connect to the web interface but only through an Ethernet connection not Wi-Fi.

There is now roughly an eight hour diff between the run time of the system software and the server software.

Everything else looks good. Still can’t connect to remotes. When I try sometimes it find the core initializes it gives me the connect button and the it fails. Other times it asks if I want to choose another core.