Part of a multiCD collection is missing

I added a MultiCD on Qobuz Collection to my library. 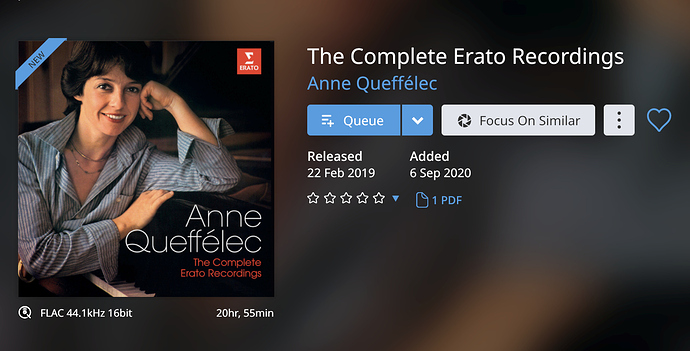 Discs 17-21 (which are available on Qobuz) do not show up in Roon. (There are other discs which are unavailable in the collection on both Qobuz and Roon - not referring to these.) Is there a way to fix this?

Also, If I make the missing tracks a favorite in Qobuz, they do show up in Roon under MyQobuz > Favorite Tracks and are streamable, but still are not included with the Album listing itself.

Yes, I have the same problem.

There appears to be no disk number metadata. So on adding this album to library this 21 CD box-set becomes a single album of 312 tracks. But I seem to remember there is a limit to the number of tracks roon will display (150?). A it happens there are two of the CDs unavailable on Qobuz. CD5 (tracks 39-52) and CD 16 (tracks 153-168).

I wonder if the limit on the tracks roon will display is affecting this? It is disappointing as many of the available tracks roon is not displaying is core French piano repertoire like Satie and Debussy for which Queffélec has a reputation. Maybe @support could take a closer look at this?

There is a limit of ~180 tracks that Roon can display currently on the album page. Unfortunately it looks like we don’t get disc information from Qobuz about this album.

We’ll look into this further, but for now the best solution is to use the Fix Track Grouping option under Edit to create multiple discs.

Thanks for letting me know. I just did the track grouping and although that certainly works, it is tedious and time-consuming. I think Roon and Qobuz need a better longterm solution. I wonder how many multi-disc collections have this problem. But for now, it works. Problem solved, for this disc set.