I’m not able to identify PJ’s Ten (Redux) version. It’s not available in the metadata, while afaik this is a fairly known version.

Could you guys help out?

Roon identifies the mp3 copy i downloaded from Amazon when it came out. Now it does default to the wrong album art for that release but it is recognized and the 2009 reissue versus the 1991 cd that can be seen in the left of the image. 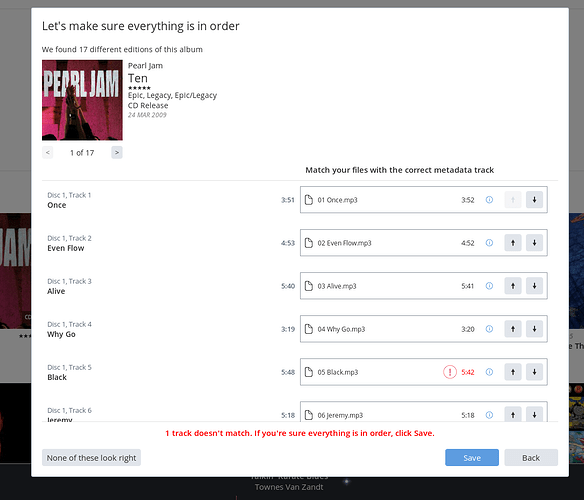 I’m not sure if I’m following you here… To me this looks like it identified the original release, and not the Redux. Or am I missing something?

Both answers are right

Track wise the first choice as Kevin points out is the correct one. But it is not exactly the release Harry is looking for.

Weird that the first choice with Kevin is a CD release while with me it is a Digital download Release. 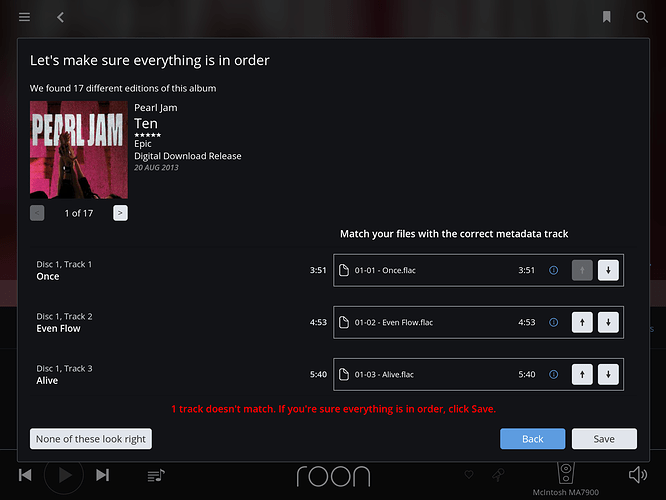 I changed the artwork and tagged it as Redux myself, but would be nice that the metadata providers or roon would identify this automatically.

Sorry. This is a tricky one that i didn’t explain the point i was trying to make very well.

Like you i do view this as a separate album to the original release as the remasters are so different but in this context Roon and the metadata providers see it as a reissue of the original versus a different album, which i guess i cant really dispute as it technically is.

What i was trying to show in my picture was that Roon does correctly identify this album as a version of Ten with the issue being as @allineedis points out the wrong album cover. That was easily changed enough by editing the fields for the album.

One other thing i discovered is that on the artist page the original release year is shown versus the reissue date for the album even though roon recognizes that.

@brian im not sure its possible but could this be a flag, or is it a flag option available in the upcoming metadata enhancements to show the Release data versus the Original Release Date as the year under the album under the artist screen? 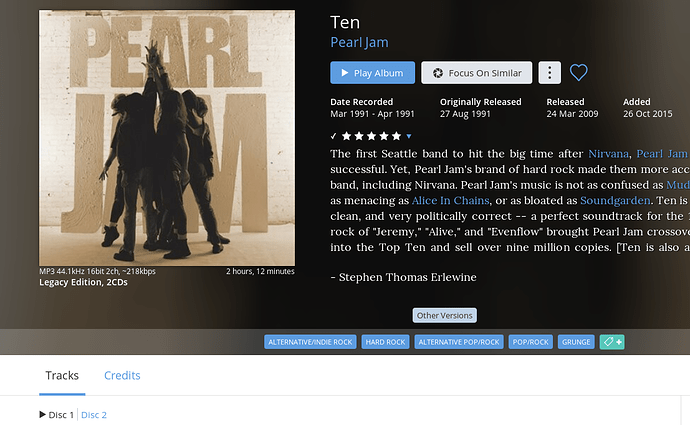 It’s sometimes hard to please everyone but I think most of us would prefer initial year of release of the original album to be the default.

You made a great point John and therein lies the problem. The date of the original release as well as the formats available when it was has a lot to do with our display preferences. For this album 2009 would be my preference but for groups like the Beatles where all digital formats are reissues i would be in 100% agreement with you and suspect most others would as well.

So a modification to my suggestion would be instead of a global change allow for whats displayed to be changed on a per album basis in the edit fields, if possible.