Performance Issues on a Synology 716+

have installed the latest package for Roon on an original Synology 716+ with 2GB RAM and it worked fine, besides a quite long time starting to play when choosing a new track, what took about 3 seconds. After reading the installation hints carefully I decided to install Roon Server on an external SSD that is connected via USB3 to the Synology. As a result the delay reduced dramatically to something below a second what was great. Unfortunately this changed again to the slow 3 seconds after some days. Stop and restart of Roon didn’t change anything. What I realized when checking Synology’s Recource Monitor while starting the Roon was that after a few seconds after starting the acitivity status of ‘Raat-Server’ and ‘Roon Server’ changed to ‘Sleeping’. Starting or stoping music playback has only influence on the activity status of the ‘Roon Appliance’ but not on ‘Raat-Server’ and ‘Roon Server’. Maybe that has to do with the quite long delay when starting music playback.
Many thanks for sharing your thoughts. 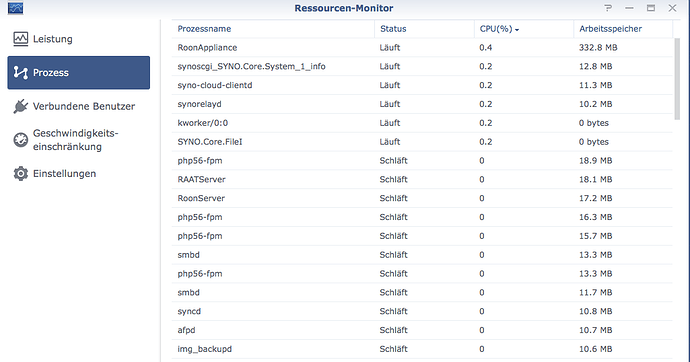 It looks like this NAS has a Celeron N3150. This CPU will work, but it is slower than what we’d normally recommend for Roon.

The SSD will help but if your collection is larger than, say, 20k tracks, you’ll probably get much better performance with a more powerful Core, whether that’s running on a more powerful NAS or something like a NUC.

More information about why Roon needs a powerful Core can be found here.

Hi Peter, thanks for sharing. I have the same NAS but with 8Go of RAM. Let me check this week and compare with my actual solution : RoonServer running on a BRIX.

Hi Mike, thanks for the response. Basically I’m aware the the processor of my DS hasn’t the performance recommended. My point was, that when I first moved the Roon server from the NAS hard drive to an attached SSD-drive there was a sudden increase in the performance of Roon especially with regards to its responsiveness when starting playback. Unfortunately this has changed back for whatever reason to the slow performance of the time when roonserver was installed on the rotating hard drive and not on the SSD. As a result the responsiveness when starting playback and jumping to the next track has worsened again and takes ca. 3 seconds. I’m just wondering why this happened. Checking the DS process monitor of the DS716 I discovered that only ‘RoonAppliance’ shows activity while ‘Roonserver’ and also ‘RATTServer’ are marked as ‘asleep’ (see the screenshot in my first comment). Is this normal or a signal for a misbehavior of the application on the DS and possibly the reason for the slow responsiveness? I ‘only’ have about 1.000 albums in my library.

Have you checked if anything changes when you stop and start Roon Server again in the Synology Package Center?

Small update on the behavior after restart: ‘RATTServer’ behaves the same as ‘RoonServer’ and changes status from running to asleep 2-3 seconds after restart of Roon on the DS

Another update on the performance issue with the DS 716+: Just checked the installation protocol and realized a error message under ‘Loading module and mixer oss’ (see screenshot). Is the ‘Failed’ message normal or could this be a hint for the poor performance of Roonserver on my DS? 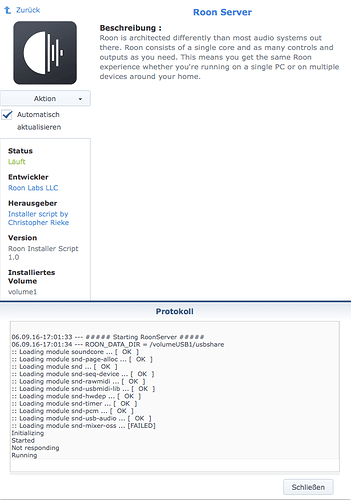 I studied the AudioStation package when I built the package, to load the same sets of audio kernel modules.
The “snd-pcm-oss” should not be relevant for Roon Server as Roon does not utilize OSS (open sound system).

Hi Peter,
I am running the server also on a ds716+ without an ssd and mine takes around a second to react (and its all over the wireless). Which endpoint are you using?
If I use airplay it takes also around 3secs but if using a raspeberry with roon bridge then its around a sec. hope it helps.