Performance problems on a quad core i7

and this is on a dedicated, headless, quad core i7 machine running just the OS and Roon

a fix is needed asap!

Hey @pl_svn – the 100 track limit discussed in the other thread has been frustrating for people with albums containing more than 100 tracks on a single disc (such a digital “box sets” with tracks simply numbered 1-250). We did this because showing hundreds of tracks on screen at once means tens of thousands of UI components, which could cause performance problems in the current interface design.

Can you give us the details of your setup, including the total size of your library in tracks?

Have you tried any remotes connected to that Roon on your mac? iOS or Android? Even another Mac or Windows PC?

That quad core Mac Mini is known for doing very bad things to its internals. it’s probably their most returned Mac Mini due to heat damage on various components (especially the GPU). Note that they never made a quad core mini again… it just overheats in there. How hot is your machine to touch? I wonder if the CPU is doing some backing off since it is getting too hot in there… I had the same machine and I was much happier when I upgraded.

We understand why 100+ tracks on that page are slow to display, but your issue doesn’t fall under that explanation (that’s why @mike moved you out of that other topic). The fact that you are the only user reporting this happening on an amply powerful machine, I’m thinking something is not as we both think it is.

So, let’s first try to eliminate some variables… try a different remote connected to the Mac… if it is also slow, it gives us very little information, but if it is fast (once the data is loaded), I think I will have a better idea of what is going on.

slow loading of those two albums (and others “similar”) happens using either (it’s even slower from the iPad)
dropouts on playback of those two (only two multi disc, high-ish track count, DSD ones I have) I’ve only seen happening using the MPB because that’s what I use, first time I listen to a new album, to assign favourites/picks

issue is clearly dependant from the above activities: if I just let the music play all is fine

Mac mini is lukewarm as it has always been. fan never goes above the minimum (1600/1800rpm)

never heard of issues on quad core i7 Mac minis: I have two, the older one (mid 2011) I’m using as server
Apple pulled the quad-core options from later generations just to keep costs down by also not having to stock two different motherboards

So you’re marking favorites on the MBP or the iPad, and you’re repeatedly getting dropouts when you do that? Or the dropouts happen whether you’re doing anything with the remote or not?

Are you able to log into the Core machine remotely and confirm what you’re seeing in Activity Monitor?

Can you also try moving a file or two to the Core’s internal hard drive, and confirm whether you get dropouts when the QNAP isn’t involved?

So you’re marking favorites on the MBP or the iPad, and you’re repeatedly getting dropouts when you do that?

exactly: only getting light dropouts when marking favourites and heavier ones, often even skips, when marking picks (which takes forever!) 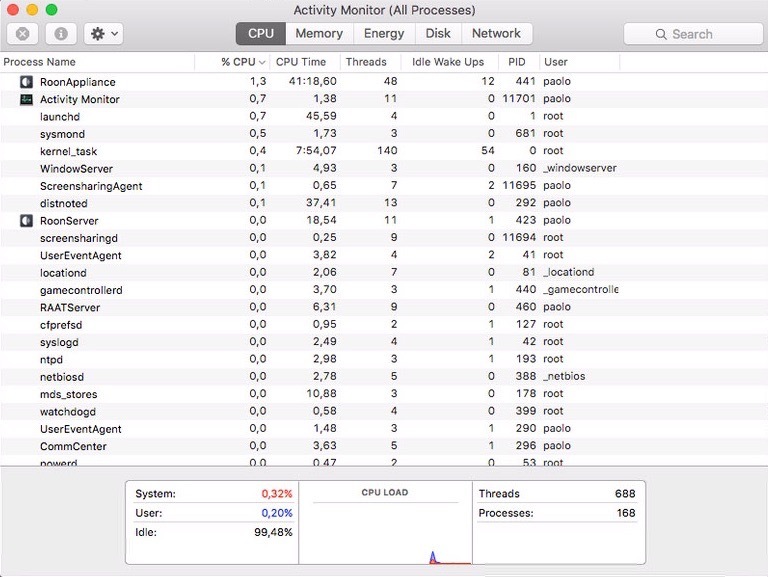 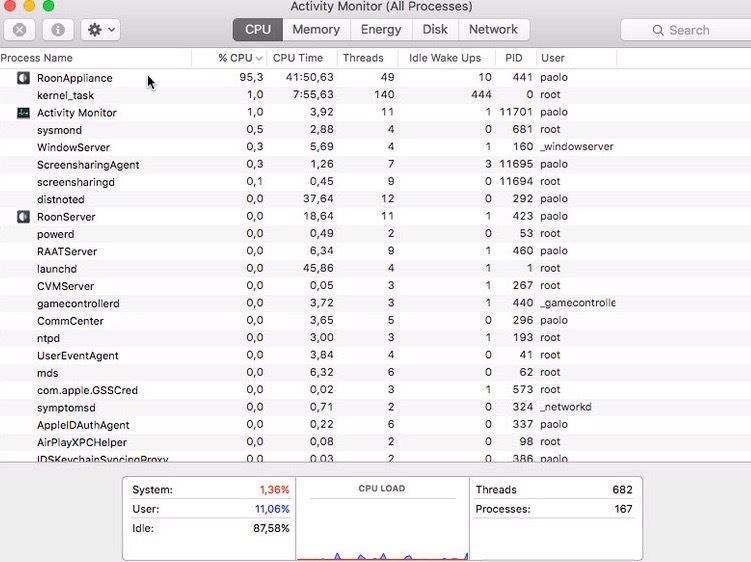 I’m quite sure the NAS can be ruled out: it’s dedicated to music tracks only, with all services/apps but SMB turned off and only accessed by the Mac mini
Mini’s local SSD would obviously be much faster but…

how long does that cpu spike last?

also, just to be clear: the machine with the slowness, dropouts, etc, is running RoonServer, not Roon? It looks like it from your activity monitor, but i want to make sure there isnt another Roon there.

is this the only album this slowness/cpu spike happens on? is favoriting fine on other albums or just this one?

though… I guess it also happens each and every time I access “Edit track” to mark a pick. this takes almost as long as opening the album then… saving takes even longer and this is when droputs occour

momentary spikes are normal. delays in waveform loading could just be because they are generating on-demand.

the only thing youve told me that makes me think this is an issue is favoriting… that shouldnt cause dropouts.

what album is it?

he only thing youve told me that makes me think this is an issue is favoriting… that shouldnt cause dropouts.

what album is it?

when favouriting dropouts are very light (but almost always there)

is it only the large tracks albums?

we need to get your dbs… @support will contact you shortly.

is it only the large tracks albums?

dropouts only with DSD ones, slow loading… with every “large-ish” multi disc album