My absolute favorite Roon feature is the ability to see other Performances of each track. I noticed though that this feature does not seem to work very consistently. Take the image below as an example. The song “Sara Smile” is correctly identified as having 7 other Performances in my lilbrary. However, other tracks like “Rich Girl” and “One on One” are not shown as having other Performances. I know for a fact that both of these tracks are on the Hall & Oates albums VH1 Behind the Music and Live at the Troubadour in my library. Am I doing something wrong or not understanding completely how this feature works? 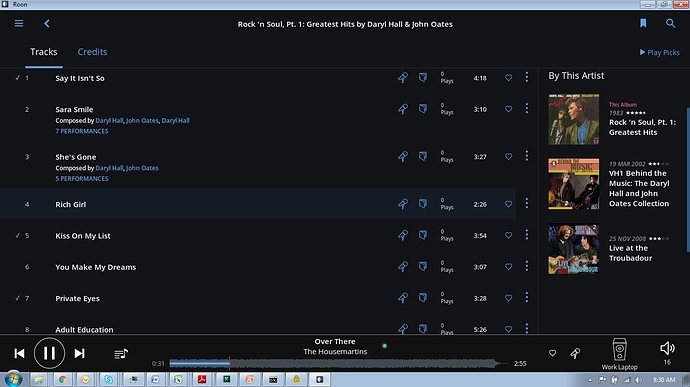 It rather depends upon the current state of Roon’s metadata. I presume that when you view the songs on those other albums you mentioned that it doesn’t link to the first album either?

Right, the same songs on the other albums are not linked either. I double checked the song titles and they match. It would be good to know what mechanism Roon uses to match songs. Its clearly not just song title.

From what I have seen before on this forum Roon uses song title and composer to generate a match. Composers need to be identical and this can lead to a lot of versions not matching.

I see this problem all the time.I have close to 230,000 tracks.
I love this feature…wish it functioned better.
I’m a lifer from the second month of Roons inception.

I love this feature…wish it functioned better.

Hi @seaharp1. Yes, it could and should function better. We will get there.

I’m a lifer from the second month of Roons inception.