I’m struggling to understand how “performed by” is manageable in multiple compositions albums. Example:

Why the Wanderer doesn’t display “by …” in addition to the recording location? How can I change that? Intuitively I would select “file info” for “artist album” but I don’t have that option.

Is the album identified by Roon ?

My experience is roon doesn’t handle this at all well. Extremely hit and miss even when there is very complete metadata.

In this example there are 5 artists playing various compositions by different composers in different combinations of solo, duo, trio and quintet. 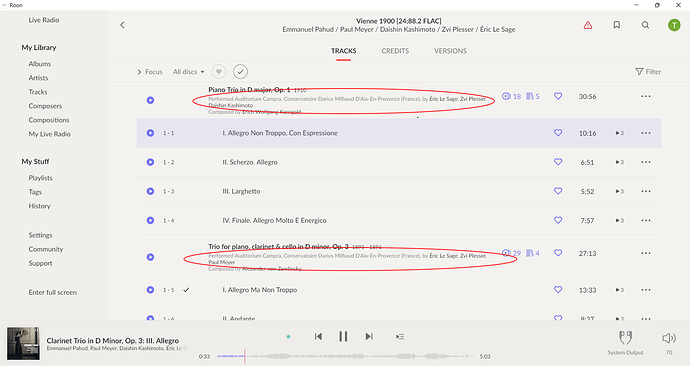 Go to the credits screen in your example and see what you have. In my example I have this: 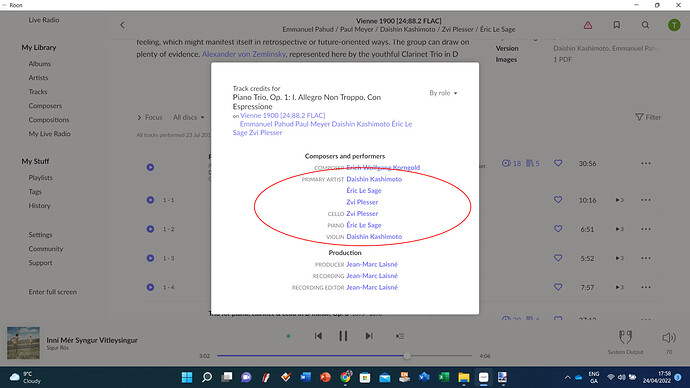 The disadvantage is of course that this is in general a lot of manual work because to my knowledge, as you have discovered, roon doesn’t do it for you automatically. The other disadvantage is that you get a lot of duplicated clutter on the credits screens. But on balance I prefer to do this as I would rather be able to see the performers on a single main album view rather than hidden in another “credits” menu option which takes extra clicks to access.

Thank you for your in-depth reply.

This helped me figure out two points. I report this here just to be sure I got it right. 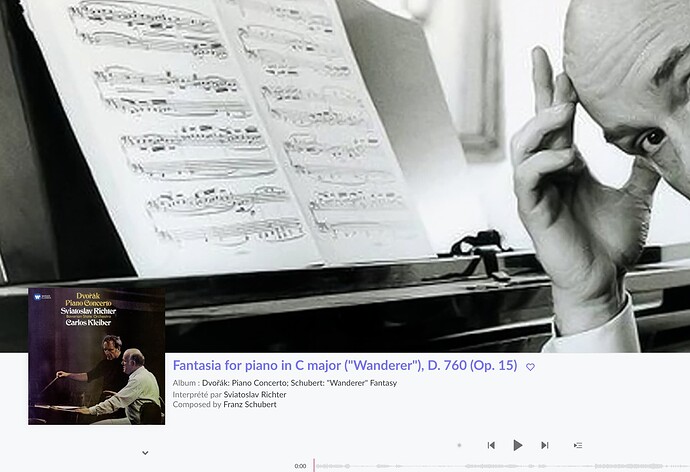 I suppose this is due to avoid a form of repetition since we are supposed to know what artist is playing according to the album view. I can live with that.

Structurally those are “pasted” on the objet “Album” (and not “Composition”) and have the priority on other metadata which leads to such mistakes:

As you can see the Wanderer performer (i.e. Richter) is associated with all main artists. In order to correct this, you have to delete the links in album settings, losing a useful navigating tool.

I believe allowing to set off and on links according to specific tracks or compositions would be a nice addition.

In order to correct this, you have to delete the links in album settings, losing a useful navigating tool.

Yes, I would broadly agree with your conclusion that a lot of editing is required but in general I prefer to loose irrelevant navigation links against performances rather than being confused about who performed what. In this case, to many it will be clear that Richter is playing solo and he is not being “conducted” by Kleiber. But to some it may not be so obvious. I also often find the cases can be much more ambiguous, especially where I am not familiar with either the composition or the artists. It can be a lot of work double checking against album art / discogs etc. etc. to assign the relevant artists to each composition rather than accepting an irrelevant and confusing jumble of “album artists” many of who have nothing to do with the track(s) as is often the case. On the other hand, to be fair, I have often been surprised with large box sets that if I leave the artist field blank rather than arduously editing hundreds of line items roon will assign the correct performing artists regardless. It’s all hit and miss though. Never entirely predictable.