Apologies for the duplication of post - I originally posted the below on the “Airplay Stuttering” thread, but am keen to resolve before my trial runs out and the information on the other threads has not helped.

I currently get hiccups, stutters and the occasional burst of digital noise every 20-30 seconds through Roon, but exactly the same setup runs flawlessly via iTunes outputting to the AE (via CoreAudio I assume?)

Source: late 2013 Retina Macbook Pro 13", 8Gb, i5, 512Gb SSD, Sierra OS, iTunes library with mostly ALAC lossless or HD
Streaming via Older G2(?) power brick style Airport express connected via TOSLINK to
Cambridge Audio DACMagic Plus hooked to amp and speakers.
Router is a FrizBox 7940 and working well for other devices in the household.
The only thing connected to the AE is my MacBook - it is only used as an Airplay device and not an access point or extender

None of the above has solved the issue - anyone else got any ideas?

Hi @Iain ---- Thank you for the report and my apologies for the troubles here. May I kindly ask you to please verify / provide the following:

I am now just going to kick off the background analysis worker again and leave it just to see if anything changes once my entire library has been analysed/completed…looks like it may take a while! 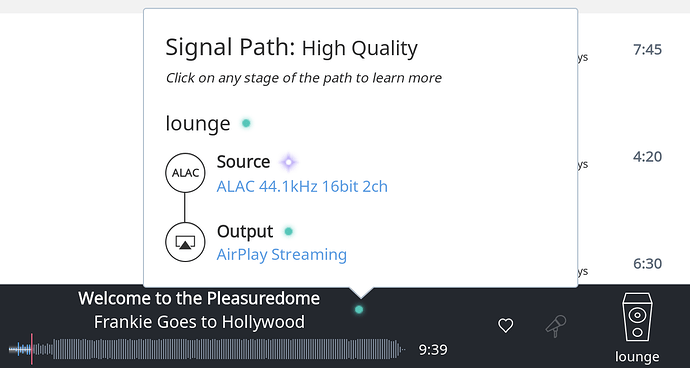 I had a number of issues with the Older Airport Express (the one that looks like a MacBook power block). Finally gave up and replaced it with a RPi. You might not win this one sadly.

It’s an old Airport Express, not an Apple TV. Could it be that it’s not supported? Ooohhhh. The old one. I don’t think that model works very well with Roon. I don’t know the exact details of what makes it different (we have never seen one–Roon is about a year old, and that product turns 10 next year). Apple did a pretty serious re-working of the AirPlay protocol in ~2011, and every Apple device sold since (and every non-Apple AirPlay device sold, period) speaks the new way. We speak the new…

Conveniently I do have an RPi but never really found an Audio distro I liked better than iTunes and the AE!

What are you using on the RPi that works well with Roon? I guess it does have the advantage of being bit perfect and capable of streaming my HD stuff without downsampling.

Ok - so I got my Roonbridge working - testing now…

Given that it is bit perfect unlike my AE, might be the way to go regardless of getting the AE working!

With hi res tracks, it works fine for half a track, then I get the “An audio file is loading slowly.” message and the track either stops playing or skips to the next track, stutters a bit then either recovers or stops.

I am trying now with the Roonbridge plugged directly into the router.

As above, source is the MacBook connected via Gigabit WiFi.

Right! So if I take the switch out of the equation it seems (so far) to work Ok.

Unfortunately, as good as Roon is, this is all starting to become rather hard work and I am spending my time messing around with tech, rather than actually listening to the music- which pretty much undermines the whole point of Roon in the first place!

I am not looking to run more cables, replace other hardware or upgrade my source when my iTunes + AE setup “just works” (not as common for Apple stuff these days as it used to be!) so currently a subscription is not looking likely, which is a shame.

Another update for anyone still watching:

I went back and checked all my settings again - I changed the buffer size back the default (I don’t recall setting it to 500ms, but must have done at some point in all my tweaking…) of 100ms and have tested the streaming with one of my biggest HD audio tracks (Yes - Close to the Edge at a hair under 400Mb) and this time it worked flawlessly!

Not sure if this was fluke or specifically down to the buffer settings, but will continue to listen and test.

Once you get past the initial fiddling, the pi should be pretty maintenance-free. I shifted to the Dietpi http://dietpi.com install, which packaged up Roon bridge in their install. Took about an hour to get it all sorted and now I can pretend they don’t exist. I leave them on all the time and they just work.

I think a willingness to tinker is directly related to the amount of money you want to spend. There are out of the box options that are Roon ready, but they cost more than the pi. There is a list of partners here: https://roonlabs.com/partners.html

Glad it seems to be working for you now. The power of Roon is in the interface. I think you’ll find once you begin to browse that it’s vastly superior to the iTunes experience (which is where I was coming from as well).

Thanks for the thoughts and for directing me down the RPi route.

I listened all last night and it coped with everything I could throw at it so I think I have cracked it! It is certainly a better option than the AE as far as accuracy is concerned, so I will stick with it and build around that.