Perspective on storage speeds and on Meltdown/Spectre (geeky)

We have had lots of discussion of performance requirements, with cores and cache and SSD and HD, and various recommendations. I for one argue for lots of RAM and lots of SSD as more beneficial than other ways of spending money.

And this comes up in discussion of the Meltdown and Spectre vulnerabilities, because they are rooted in an optimization involving “speculative execution”, where the CPU does some work before finding out if it is needed. This is efficient because of the vast differences in speed of access at different levels. Compared to doing some work on data that it already has in a register or cache, fetching it from RAM or disk takes an eternity.

I saw this great table in a writeup by Ben Thompson (he has a subscription site stratechery.com), it came originally from this book. The table looks at the speed of access at different levels, and then imagines the times if the CPU dealing with data it already had took 1 second, instead of a nanosecond. 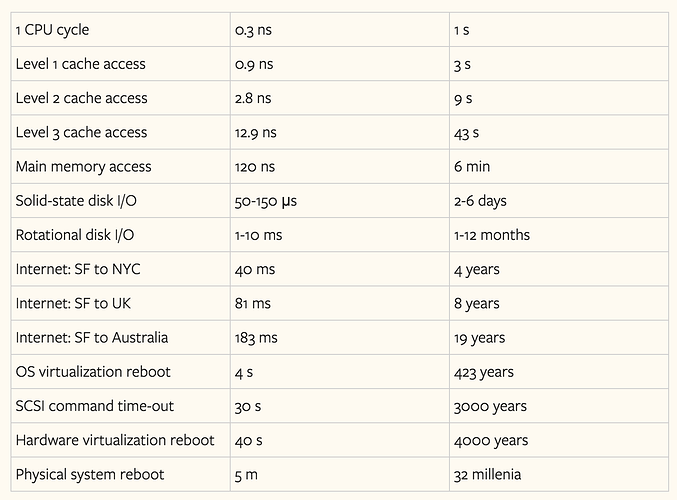 I should add that purchasing and taking delivery and installing and wiring and configuring a physical server in a typical company takes several months, equivalent to one billion years on that other scale!