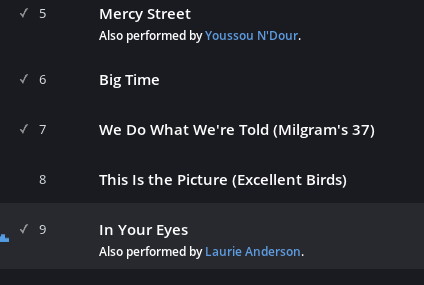 While we are there we need to fix the 2012 Remaster also.

Track 12 is actually “Don’t Give Up (Alternative Version - Piano and Bvox Mix)” not Shock The Monkey.

This is just a bump to an old Metadata questions. The new version has not corrected this issue. Is there something I can do with editing those tracks.

Nick, can you find an allmusic release which matches yours? There are a number where track 12 is Shock the Monkey…

Hi Joel, thanks for looking into this one.
The version is 25th Anniversary 2012 Society of Sound issue. 24/48k.
There are a few 25th versions on allmusic.com but some have no track info.

The actual track appears as a single track on disc 8 of the box set.

100% it is not a version of shock the monkey

Joel, try this one

@ncpl: Nick, I’ve been re-working our track equivalence code to address duplicate and wrong track name issues, and my changes fix this problem

. We’ll be releasing this update to the metadata service as soon as it passes QA and, as Rovi doesn’t have the Society of Sound release metadata, you’ll be getting exactly the MusicBrainz data you just linked to.

@Rugby: Daniel, I suspect that the incorrect guest vocalist attributions are wrong at source, but I need to confirm.

Perfect. Tested on a new scan. Thanks for fixing this @joel

The guest artist attribution fix is with Rovi…