Should Roon be uber-customizable, or should it be simple? Are these at odds? Is it possible to have both?

There have been many references/requests in various threads for Roon to allow configuration options rather than be saddled with a single/standard Roon-chosen means of doing something. The feedback to 1.6 strongly illustrates this - some love it as it is, others apparently dislike parts of it. Mostly, those on the latter side would likely be satisfied if they had a choice as to how something is done, what is displayed, etc.

But user configuration options generally make a product harder to use for those who just want something to boot up and work. Those who are not deeply into the hobby may prefer no such options to have to wade through.

It must be a challenge to balance these apparently conflicting impulses. One assumes that although you cannot please everyone, the way to please the most folks is with lots of configuration options. But does that then alienate another portion of the user base?

How can we have both? Is it possible?

My measure here is jriver that ended up being incredibly frustrating for me , adding layers of switches, views, becoming a video platform etc. I had used it for years but it drove me away.
I am absolutely not saying that there shouldn’t be any customisation, just make each step toward it small and keep the KISS principles.

They currently do have some customization’s e.g. how large your Album Art is in Album View. From the 1.6 discussions a lot of people hate the new Now Playing screen and the BIG GREY THING at the bottom takes up a lot of vertical space and seems to just follow you to every screen. You could have some simple customization’s as to what elements are displayed and where. Even my Samsung smart TV has the ability to customize what apps are displayed and in what order. 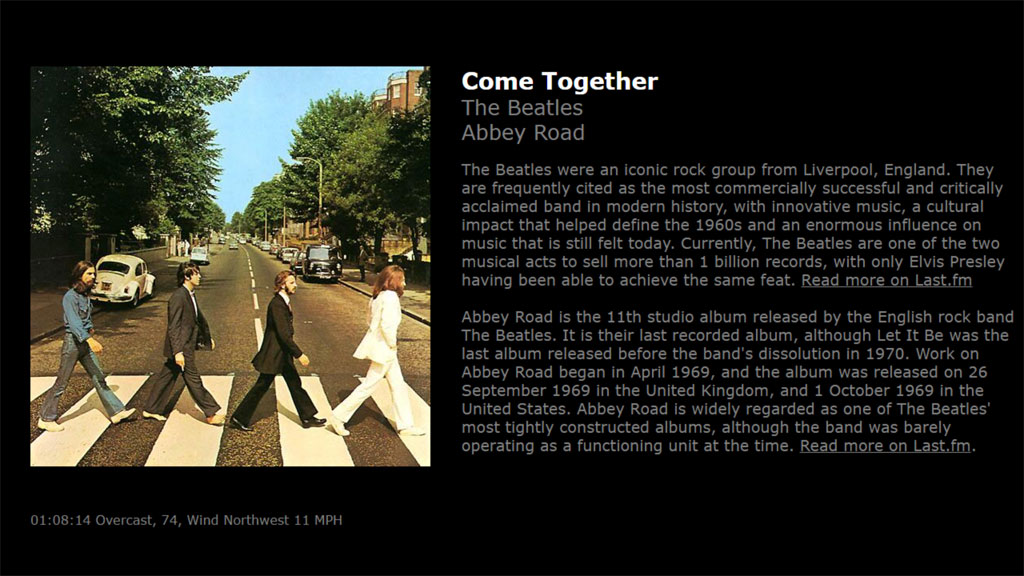 Here’s a now playing display I was able to cobble together using JRiver’s “track info” customization html page plus a little javascript.

It gets artist and album info from LastFM (and caches it) and also shows time and current weather from the NWS XML server.

It’s probably way more trouble than most “normal” people would go to. And yes, JRiver has gotten so bloated and convoluted that it drove me to Roon. But we do miss this now playing display. It tells us when it’s time to walk the dog and how to dress.

Rational customization is probably somewhere in between. Roon 1.6 is a step in the right direction. (I would settle for just the ability to change the font for album reviews and artist bios.)

One option is like Photoshop, which comes with a number of preset work spaces, or you can make your own and then save it. Of course PS is a huge legacy program with dozens of developers behind it, but something along those lines on a Roon scale would be optimal.

I understand the need to keep things simple for turnkey customers, but lets face it, if you are going to run Roon, and you’re not buying a setup piece of hardware, you either need a few computer chops to begin with, or a dealer or IT person/friend, and in many places it’s not the most intuitive program, even for those with the chops and have read the KB. I think most of Roon’s clients are ‘adults’ - we can handle a few customization switches and one step delete process (for streaming titles at least) without thinking it’s too cumbersome or overwhelming from what it is already.

I applaud all of the under the hood advances in the latest release, But the cheap can of spray paint for the body doesn’t cut it - get this jalopy to the body shop for a real lacquer job!

Should Roon be uber-customizable, or should it be simple? Are these at odds? Is it possible to have both?

Done well one can have both.

Such projects have an elegant underlying software architecture exposed with a robust API and a beautiful User Interface(UI). I believe that Roon fundamentally has an elegant architecture. Have not done a deep dive on the API and will let others more knowledgable comment.

With a robust API Roon could position the default UI as this is how Roon views the world and promote others to use the API to create a spectrum of UI’s from extreme easy of use to a tinkerers delight.

R_Neal, I like your Now Playing screen because it highlights what is lacking from Roon’s “UI developers”. That is, your screen is using BOTH vertical and horizontal space. Roon has too much unused Horizontal space. A design like yours with the ability to request how many pixels the Album Art takes up would be a simple interface. So if you wanted larger Album Art then your text section would be narrower.

Maybe this isn’t possible with the development platform that Roon started with (and I understand the choice if it supports all the various OS’s that Roon is needed to work on), but I really liked the way that Foobar allowed you to unlock the interface, pull the various segments and fields wherever you wanted, and then re-lock it.

No one is going to claim default Foobar is beautiful. And it is Windows-y. But a capability like this would most likely end many of the debates around screen allocation.

But the question as above is whether that then makes it much harder for a non-techie to use? Or does it make it harder or near impossible for Roon to accomplish future objectives without being painted into a development corner?

It’s pretty amazing that some users find the new UI changes disastrous while others love it. I guess that is par for the course.

It will always be like this no matter what, no matter the software. De gustibus non est disputandum. One of the solutions is to allow a controllable level of customization. Another approach is “the user has no idea what is good and what he wants, let him eat whatever we serve”. (please note that the thread subject starts with “Philosophy”

It’s pretty amazing that some users find the new UI changes disastrous while others love it. I guess that is par for the course.

I read a great book once about how to be more mindful when processing information + compensating for biases–both your own, and those present in the information. One technique is to always evaluate incoming information relative to an expected baseline.

Years of working on and releasing software has taught me that there’s a set of people who hate UI changes by default. These people will be triggered no matter what you change. The now playing screen is especially likely to draw ire because we changed the meaning of a fairly large “hit area” at the bottom of the screen and made it do something different from before. Some people were angry the moment they clicked the info at the bottom of the screen + didn’t see the play queue–everything that comes after that is tainted by that anger.

Tesla just went through this with their V8->V9 update a few months ago. The new version is immensely better. More elegant, more unified, easier to use, and more scalable across their product line, but lots and lots of people are spewing vitriol about it and they will until they get used to it. By then they will be ready to hate the next version.

To be clear, there’s been a lot of good, detailed, constructive feedback also, and we are going to act on it. We appreciate the people who have taken the time to explain what is wrong for them clearly and thoughtfully. There’s also a lot of expected fog to wade through–the back-seat driving, insults, hyperbole, condescension, “I could have designed this better”, “fire your design team”, etc…all of that is part of the baseline/expected noise. It doesn’t really land–someone was going to say all of that no matter what we released.

It doesn’t really land–someone was going to say all of that no matter what we released.

I’m glad to see that. I would hate for anyone to feel personally insulted or attacked. I guess this part is similar to being a professional athlete and being attacked in social media every day, no matter how you do. There is a group ready to criticize and others who support, but the pain one feels from the criticism may be more than the salve of the support. I guess you just have to consider that a hazard of the job.

I mean, as a lawyer, sometimes people just approach you in an aggressive, “hit first” nature. I suppose I just chalk that up to the job hazard as well.