Impressive specifications, waiting for an OSMC image to it and than my Allo BOSS DAC has a new mother.

You would hope so. More RAM , faster processor and they have separated USB and Ethernet so possible noise reduction. Can’t wait to see what people do with it.

Hopefully the guys at Volumio and Dietpi and Harry @spockfish! will be able to get hold of this soon. I read that distributions may need to be updated.

Already ordered one.
Yeah this requires some components to be updated.

can only order ex USA I think, so I will have to wait…or get while I’m in the states next month

Looking forward to Ropiee on a new Pi that has the USB and Ethernet on a different bus. Can finally move in from my sparky based Allo.

We get better support from Harry than any manufacturer…

Yeah, it will be nice to be able to use USB out at the same time as Ethernet in! Though to be fair, using WiFi for the connection to Roon has worked just fine for me.

For me, it triggered the XMOS fast bitrate-change bug in my Liberty DAC, when I was using the USB to talk to the DAC along with the Ethernet to talk to the network. I switched to using the WiFi instead for the network, and the issue went away. I was curious enough to look at the source for the Pi drivers, and comments in there (and in the issue tracker) suggest that there may be packet loss when using both USB and Ethernet simultaneously, on the Pi3 B+ board. No problem for Ethernet, of course, but I don’t know enough about the USB Audio protocol to know if that’s true there as well.

yes it is. USB audio protocol (UAC) is just a layer on top of it.

But that’s not the only problem: with the 3B+ there as this ‘fake’ gigabit connection which has problems of it’s own: it results in less bandwidth than running it on 100MB. That’s why RoPieee never uses 1GB connections on a 3B+.

This is all gone with the Pi 4. The first tests already show that the GB network speed is not only theoretical, so this is a huge improvement.

I really don’t care about raw performance (because there is) because that’s not needed at all for our purpose, but this network limitation being a thing from the past … I’m happy

Something to watch out for: 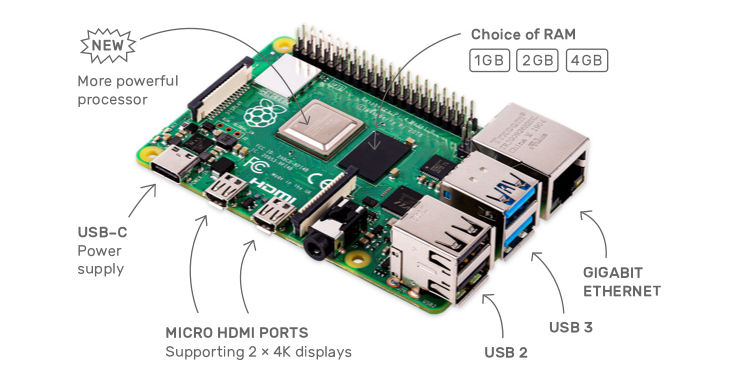 "I expect this will be fixed in a future board revision," says co-creator.

I’m pretty interested in this but one thing that is concerning me slightly is that it does appear to run a fair bit hotter than the 3+, e.g. from benchmark data on the DietPi site (https://dietpi.com/survey/#benchmark) we have…

I suppose full load isn’t much of an issue, and for a lot of the above it’s maybe 3 or 4C difference, but the lowest idle temp of 37C for the Pi 4 vs 22C for the Pi 3/3+ makes me slightly concerned for those of us (including me) who have their Pi shut inside a media cabinet and how that 15C difference for the coolest it ever gets (according to those benchmarks) might affect stability.

Agree…I’m in the topics and ambient temps are in the 30’s most of the time unless the ac is on. I’m not having issues with lan based connections and even can push dsd512 to Usb dacs so I’ll be sitting on the 3b for a long while…not even the 3b+ even though I have a couple of them.

any chance to have multichannel?

Hans Beekhuyzen has recently posted a sensible explanation for why RPi4 may not be a great choice for audio despite USB 3 and a separate network interface: https://www.youtube.com/watch?v=cjqEPyMr1zI&t=300s

Sensible? I’m afraid I don’t see it that way.

He basically says he tried a couple of Allo hats on them and didn’t like the RPi4 sound as much as the 3B+. But since I don’t have his ears or perception biases, I don’t know what that means. Could be that I’d hear it the same way, as I presume the Allo hats were designed for the 3B+. But I don’t know. He also says (and I have to admit I snorted at this, given the measurement props in the backgrounds of his videos) that he had no way of measuring it.

As a general aside: I haven’t watched a lot of his videos, because they seem to me to be flat, lifeless, and content-free. But that’s just the way I perceive them, so, as always, YMMV.

I just watched this again, to see if I was missing something. Instead, I noticed another digression. In the section on “Bandwidth”, he first introduces the idea that “top designers” of high-end streamers often feel that USB2 is better than USB3 for their products. He then says that’s easy to understand, and first explains that USB2 has enough bandwidth to handle audio. But then, instead of explaining why it’s better than USB3, he takes a left turn onto talking about Ethernet! He never does explain why it’s easy to understand, or explain the reason for the claimed preference.

So, has anybody tried the RPi4 USB out to a DAC with feeding the stream via Ethernet? Is there an observable difference with the RPi3B+? Is there a difference when 3B+'s Ethernet set to 100Mbps?