I was under the impression that HQPlayer didn’t support playback of ALAC files?

And yet playing ALC via room to HQ Player works perfectly. Can anyone explain? 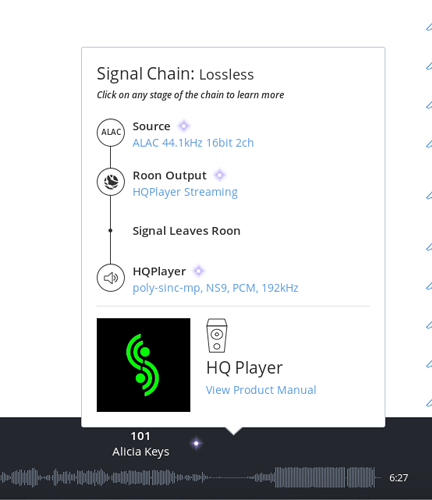 The audio stream Roon sends HQ Player is not file dependant. If Roon supports it, you can send it to HQ Player.

Edit: This may be a gross oversimplification, because there is still a difference between PCM and DSD. But it’s how I think of it.

ALAC, FLAC, WAV files once decoded all yield a PCM audio … it is this PCM audio data that is sent to the HQ Player.

This should be one of the big selling point for Roon. There have been a lot of people asking Miska to add ALAC playback support to HQPlayer and he has said no over and over based on certain reasons about his player being cross-platforrm and sound quality issues. Sounded like he pretty much wasn’t ever going to add it.

I’ve seen some other work arounds to get iTunes to send the songs to HQPlayer and some windows only programs, but Roon looks like it’s the easiest to play ALAC files thru HQPlayer. It also one of the easier to play Tidal tracks thru it as well.