I apologize if this has already been answered- all zones can be paused at once, but is it possible to simultaneously play all zones without them being grouped?

Yes, of course, if your Core machine has the horses.

Roon can even play different music in each Zone.

If you mean, will all zones play in sync, in multiroom mode, the answer is no, you have to group them. If you have a mixture of Roon, AirPlay and/or Chromecast devices, you can’t sync them. So the answer will depend on what systems you have, and what exactly you want Roon to do.

I think the question is “can I resume all zones (ie restart whatever they were playing before) after hitting the pause all zones button”.

I think the answer is no - pause button is greyed out and doesn’t function as a restart - but I’d like to be wrong! 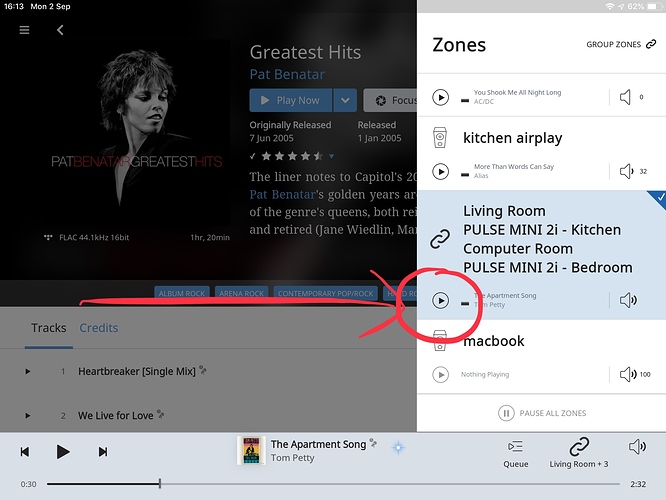 So do we think there should be one? Feature request?

Personally, I would probably never use such a thing, but if someone feels strongly about the feature, they can always raise it as a Feature Request…

Have I understood this correctly…I’m playing in multiroom… the phone rings, so I need silence, and I pause the music… I end the call…I want to resume listening. You’re saying that Roon can’t do this and maybe doesn’t need to?! What happens to my play queue, that maybe I spent quite a while putting together? I’m hoping that I’ve just missed the point here, as this seems like a schoolboy error to me.

If playing in multi room = grouped zones, then you don’t have a problem; you just resume the group. If zones are not grouped and you pause all zones, there is no means to resume with a single button.

I think I’m with Geoff on this one - I probably wouldn’t need/use it - but it still feels like it should be present!

Have I understood this correctly…

Er, no. I don’t think so. What the OP is referring to is the “Pause All Zones” button at the bottom of the Zones list. This provides a way to instantly pause all zones (both individual and grouped) that are playing - and this pauses, it does not destroy the queues that are currently assigned to each zone or grouped zone.

Unlike the Play/Pause button on the main Now Playing bar at the bottom of the Roon screen, the “Pause All Zones” does not toggle between Play and Pause - it will only Pause. The OP I think would like to see this button as a toggle, which is why I suggested putting it as a feature request.

However, what does “Play All Zones” mean? Literally, it could mean start all zones playing, but in the example shown below, I have three out of nine zones currently playing - hitting the “Pause All Zones” button will silence music throughout the house. If it were a toggle, and I hit it again, is it supposed to start playing all nine zones, or just the three that were playing? I suspect considerations like this were taken into account and the button was not made a toggle for simplicity… 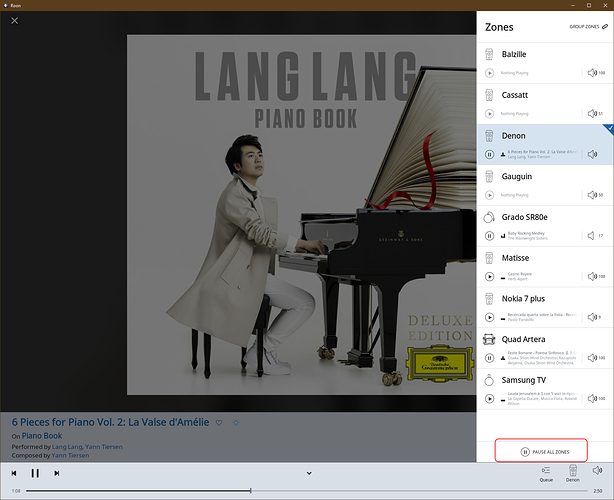