Play count for Qobuz and Tidal tracks not in library

Please add the ability to update track play count for tracks not in one’s library.

My use case is instead of adding dozens of albums to my library before listening to them, I add them to a playlist and play them from there. Unfortunately, without play count it makes it difficult to know what I’ve played days later…

Date Added is also missing so that is of no use either.

I frequently add an album, play a track or two, decide I don’t like it, then delete the album.

I’ve been looking at this and I’m thinking it’s a bug. If you play a track from an album that’s not in your library, Roon does update in Play Count on the Album View.

So, here is a Tidal Playlist I’ve added to Roon:

I’ve added the # Plays column and it currently shows as 0. If we look at the Album View of the Rory Gallagher album, we see this for the track Laundromat. Notice 0 play count. 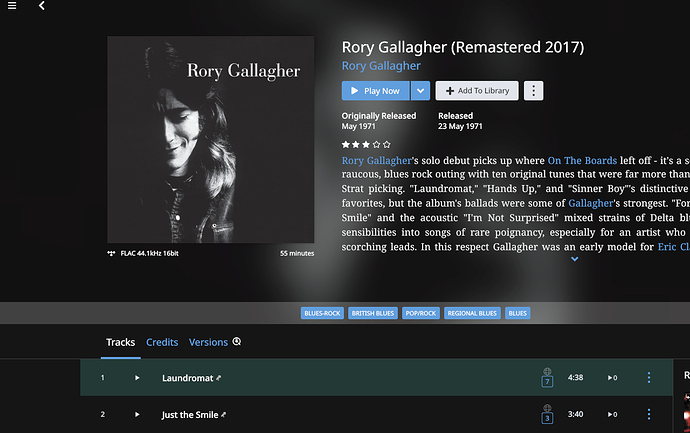 Now I’ll play that track from the Playlist. Notice it still shows 0 Plays.

However, let’s go to the Album view again. Notice the Play Count for Laundromat. It correctly shows 1. 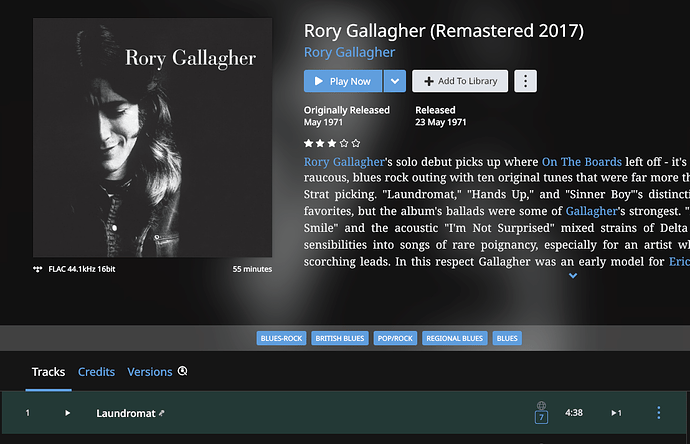 So, even though Roon tracks the play counts for tracks not in your library, it’s not being displayed in the Playlist. I think it should.

Let’s tag @support and see if it’s a bug, just missed in testing, or if it’s expected behaviour.

Edit: Also, Date Added does nothing, as you noted. I added the Rory album to my library and Date Added still displays a blank.

Thanks, good catch, I didn’t dig that deep.

This is well spotted!

I am still seeing that play counts for Tidal and Qoboz tracks (in my library) aren’t showing up in playlist views, but the play counts do show up in album views.

Do we know if there’s a fix to this?

Hi Roon Labs - just want to check if this has been noted, and can be fixed?

I also noticed this. If i try a new album via Tidal, the play count is there. But when I buy the cd and add it in the library the play count starts from zero again.

Yes - but if its added to my library, the play count for a track still shows as 0 in playlist view, but the actual count when checked in album view…

The way counts are tracked and displayed can be confusing! In most cases, what you’re seeing is a difference in the way tracks are accessed when playing a playlist created by your streaming service vs one created by you in Roon.

Hi Kirsten, nice to meet you. There are several … gotchas… with play counts in playlists vs the album page for in library vs out of library content. I’ve pointed this out before, but, probably has gotten lost.

The point is that if you add a track to a playlist in Roon, Roon does know what track is being played and is adjusting the play counts on the album page, it is just not displaying them in the playlist.

Playlist with only a non-library streaming track:

Even more interesting, is if I then remove the track from my library, and play the non-library version again. In the playlist, it will keep incrementing the counter pointing to the removed and unavailable in-library version. This continues until I add the album back in again to my library.

When I do that, the in-library version has the old lower play count and over-writes the play count of the not in library version, in essence dropping those play counts that occurred between the two additions and one removal of the album from the library.

The first track is added from the not in library version, note, that the play count has never changed. I played it several times (6), then added that album to my library, and then added the track to the play list. I played it 7 more times for a total of 13 times. I then removed the album from my library. I then played the non-library version 3 more times. As I played it, the play count for the unavailable and removed “in library” version kept incrementing to 16. The out of library album page also showed 16 plays.

I then added the album back into my library. And, added the same track back onto the playlist. The “newly re-added to my library” track had the old play count of 13. Even more so, the play count on the “out of library” album page was reset back to 13 as well.