"Play Genre" and "Radio" is not functional - how can I solve?

Do you have a solution for this issue?

Is there no error message? How much content do you have for this genres? At least a few albums? I assume you can play one of those albums directly?

First, thx for your reply. No prob to directly start any album covered by the genre (from genre page or from album page). See example shown below with the pop up 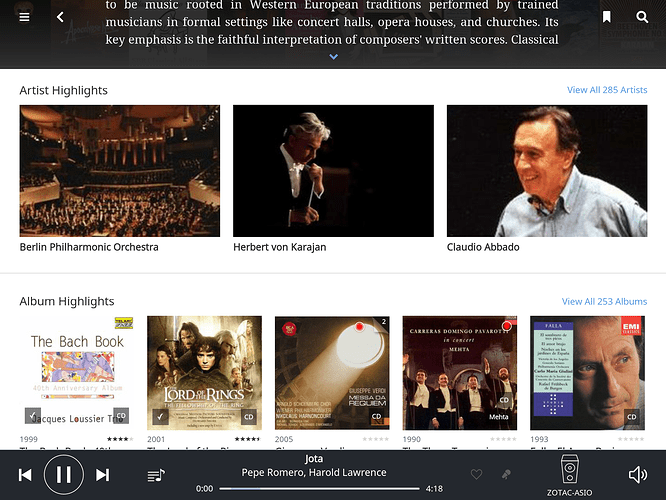 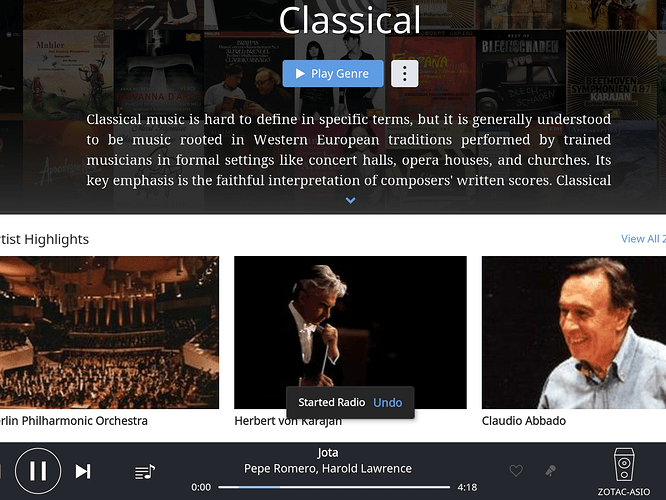 @support am getting a similar problem but it is happening only with some genres.When I look in the logs I have an “object reference not set to an instance of an object” error.

This is an example. I can play a sub-genre, for example “Contemporary Country”. But if I then choose “Country” the queue just hangs with the shuffle waiting on the last successfully played song on the queue. 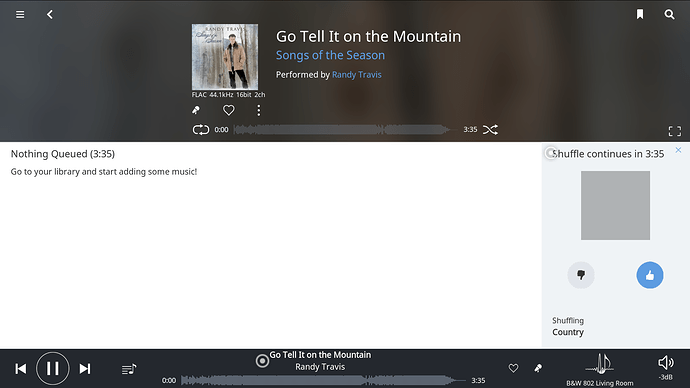 The only way to get things going again is to play any album or artist, or even most sub-genre’s. In my particular case the problem genre’s are large ones like Country, Americana, Pop/Rock.

Sorry for the slow reply here @Retlaw – so are you saying the loading status (with the blue bar moving back and forth) never completes? It stays in that status, and never finished loading? No further errors?

If that’s the case, could you send us some logs as described here?

@tripleCrotchet – are you experiencing this issue with a fresh database, or is this still the same database we had discussed previously?

No Mike. I have just started again with a completely fresh install.

I abandoned the database you guys sent as for whatever reason most of the art work was missing and my retore didn’t really work. I have just bitten the bullet and started doing a fresh install. In my case this takes a minimum of 2 to 3 weeks so external factors can affect me. After a couple of weeks I got the slow/unusable roon being reported elsewhere on 64bit Windows 10 so I had little choice but to abandon that install as well and re-start with 32bit. I had a lot of 64bit backups but I couldn’t get any of them to work with 32bit roon.

So that is where I am at the moment. I am not very far into a 32bit install and I noticed some genres will not play. I cannot see any pattern except maybe it is related to some editing I was doing on a lot of ‘Americana’ albums or maybe there was something left over from the 64bit roon. I am not very far into this install so I can stop and start again unless you have a suggestion. I see no hardware errors whatever tools I use so I am pretty convinced at this stage the common factor is probably a combination of using 64bit on my particular PC config and heavy editing habits. The whole process takes so long I can never resist the temptation to make a few edits and maybe that is just not possible.

I have tried deleting all “Pop/Rock” genre references in albums and then putting them back in again but that didn’t work.

Hi @tripleCrotchet ---- Thank you for the verification and the feedback, both are appreciated! I would like to gather a bit more information about this behavior you are reporting to us so we can have a better understanding of what could be going on here.

“This is an example. I can play a sub-genre, for example “Contemporary Country”. But if I then choose “Country” the queue just hangs with the shuffle waiting on the last successfully played song on the queue. The only way to get things going again is to play any album or artist, or even most sub-genre’s. In my particular case the problem genre’s are large ones like Country, Americana, Pop/Rock.”

Are these the ONLY steps (procedure wise) that you can think of that cause this problem to occur? Is anything else being engaged, clicked, or selected? No detail is too small

@Eric, sorry for not getting back sooner. I decided to do a fresh install as I wasn’t very far into the last one.

So far, I cannot replicate the problem. What is different, is I am approaching the install very differently. Instead of loading everything at once I am loading smaller directories and resisting the temptation to scan, analyse, edit, convert and play all at the same time. I’ll report back when I have more info. Is there a technical reason why 32bit roon would be more vulnerable to the sort of behavior I describe rather than 64bit? As has been reported elsewhere, 64bit roon and windows 10 are in effect unusable now. I can pretty much trace the behavior back to the breaking up of some box sets and themed directories and re-tagging to group by custom tags, labels and genres instead.

On your specific points.

I have the same issue, or isn’t it an issue and just “normal” behavior of Roon?
Often I do not want to select more than a Genre. The button Play Genre looks nice, but does not function since 1 1/2 years on my Mac. I’m not 100% sure but I remember it worked on my Windows PC but I do not use this one too often…
It would be great if this function would work !!!