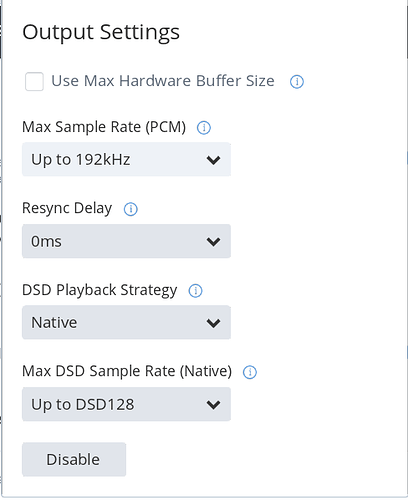 I’m getting the failure message frequently

An additional note: not to make you guys at Roon angry, but I don’t have an issue if I do playback with JRiver, same OS, DAC, and driver, etc.

@mike I sometimes get this message with my Geek Pulse Xfi.
It usually goes away if I try again, but at least once I had to futz with it. (The computer science equivalent of jiggling the handle of the toilet.)

Now a few hours later, I have some additional info:

I hope you have and idea for a solution. I consider it a pretty serious problem if I can’t have a DSD song and a PCM song in the same playlist.

And a later update:
I think I solved the problem. Changed the “resync delay” from 0 to 100ms or 500ms, not sure if 100ms is enough. This together with DoP instead of native playback seemed to do the trick. Apparently the DAC driver needs time to reset when switching from one sample rate to another, and having everything in DoP makes the process that much simpler (as if the DSD is still a PCM file).

i have the same Problem with my new Pre Box S2. It Support Native DSD. I use your settings and it seems to work. Thank you.

@Not_Roon - Is there another solution?