Playback on certain songs super slow, others too fast

Mytek Brooklyn Bridge. Cat 6 Continuous cable from router to mytek. Out of mytek to Mcintosh integrated via balanced cable. using Ipad as a controller and occasionally my phone to control roon.

Mostly on qobuz not so much tidal. The song i select plays at im guessing 1/4 speed. song is unrecognizable. skip ahead one song and that song plays slow too. If i jump 5-6 songs ahead, playback is normal. then go back to original song 20 minutes later and playback is normal.?
Occasional times a song will play very slightly faster than intended. I would guess it plays at 1.05 x the intended speed. It’s not enough to notice vocal “chipmunk” effect but music/vocals is off pitch like a guitar out of tune a half step and i can see the counter going faster than the seconds are… Happens quite a bit I have been switching to tidal when it has a fit but that is not right. I’m sure im not the only one? Help would be awesome!

Can you share a screenshot of the signal path when this is occurring?

Does it happen if you play to System Output as well?

I will send a screenshot. I did notice signal path is unchanged from when song is playing fast, slow, or just right but I will confirm.
I did have the “slow motion” thing happen once so I went down to my computer and played system output through it, and I was able to recreate the slow motion error. That’s when I knew it wasn’t my gear in my room rather an issue with roon or my computer. Thanks!

Here you go. It acted up last night and played a few songs in super slow motion. Screen shot attached.IMG_4110|640x480 I also took a short video with the signal path in frame so you can see/hear what I am but cant attach to this message. If you want the video let me know maybe I can convert it to youtube link or something?
Let me know how else I can help. 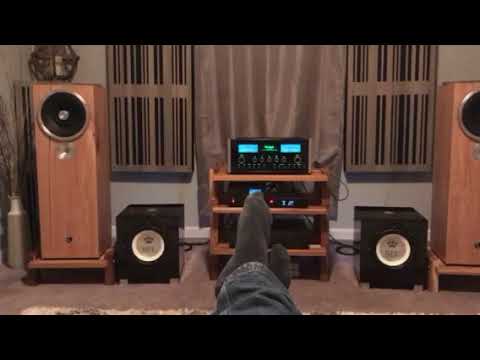 Hello @Aaron_Aungst, does this occur when playing to system output?

Aaron, did you have a software/firmware update somewhere in your audio chain in the last few days? I ask this because I had an update on my Hegel amp, and it had comparable issues after that. A complete reboot of everything in my system resolved the problem (turn off completely and power on again).

It does this on system output as well.

@Arlen I reset everything even left the mytek off for a few days. I believe it is narrowed down to the Mac/roon relationship. One or the other must have the issue.?

I don’t know. I hope Nuwriy can help you.

On my Roon Nucleus, Internet radio occasionally plays at half speed. Pause it, press play, and it’s back to normal. This only happens on Internet Radio, NOT my stored music on the Nucleus.

Not had the issue of songs playing at double the speed. (Touch wood)

Is it a buffering issue?

That sounds exactly like my Internet radio sometimes. Pause it, then press play, all back to normal.

I’ll try that. Not sure I ever did that as silly as it sounds. I usually choose another song instantly. Sometimes I pick 7-10 songs until I find one that plays normal… I’ll give it a shot and yes I do believe it has something to do with buffering etc

Hello @Aaron_Aungst, are you using DSP? Can you send me a screenshot of your signal path when the issue occurs next? Also, please reply here with a timestamp (in your local timezone) next time you notice the issue so I can enable diagnostics for your account. I’d also like to know what song you experienced this on, thanks!

@nuwriy,
I have experinced this issue with and without dsp. I normally don’t use dsp but I have played with it and still had the issue. I appologize I am not certain on what you mean with the time stamp? A few replies ago I responded to @dylan with a screen shot. It has signal path showing no dsp, the time and date at the top of screen, and the song that was playing. I also posted a video showing all of the above with the reference of what I’m hearing. Here’s the link again for screen shot…https://community.roonlabs.com/uploads/short-url/sRKhTDp0iuJmEy1wX9cmXjtm6Y5.jpeg

He means tell him an exact time you notice the problem so they can narrow it down in the logs.

And I will send you a fresh screen shot next time I have the issue.(If I listen tonight, it will be tonight. This problem happens on average once or twice per hour of listening-faithfully)

got it. thank you

Lots of acting up tonight. I’ll attach a screenshot with time(8:07 pm est New York time and again at 8:11) and two videos-one of each. It is playing songs slightly fast, super fast, normal and super slow. All over the place! 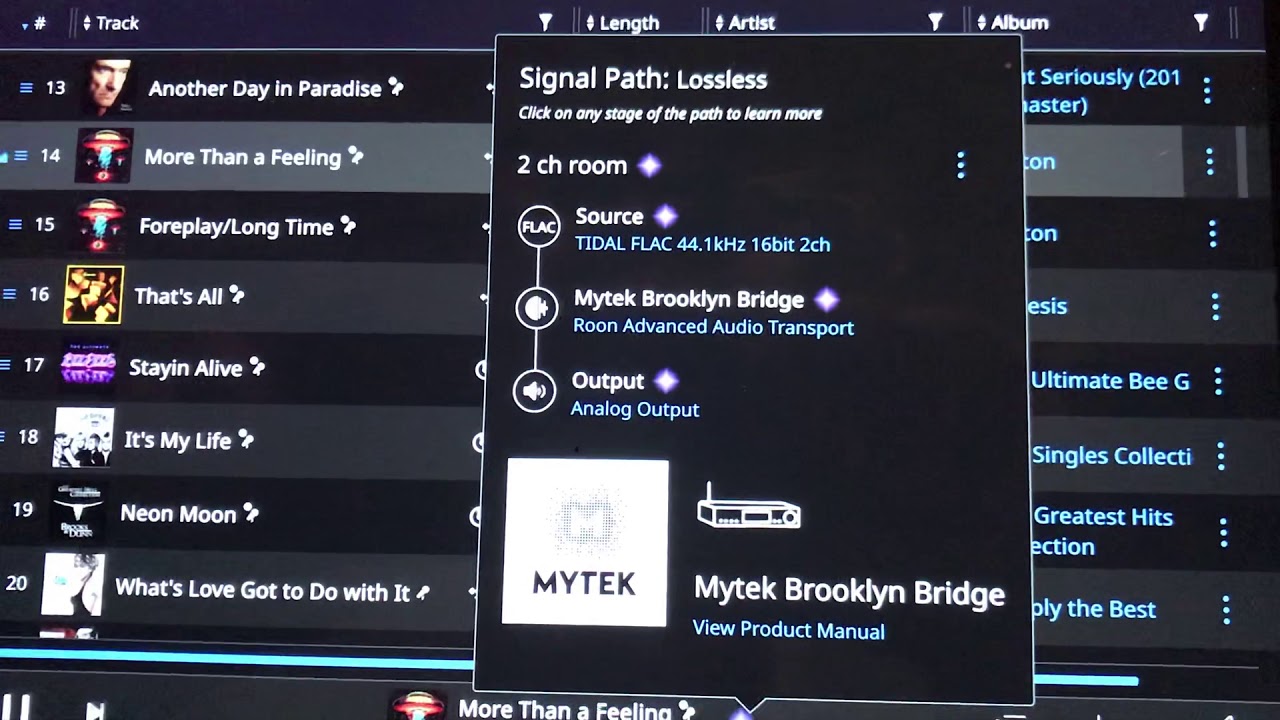 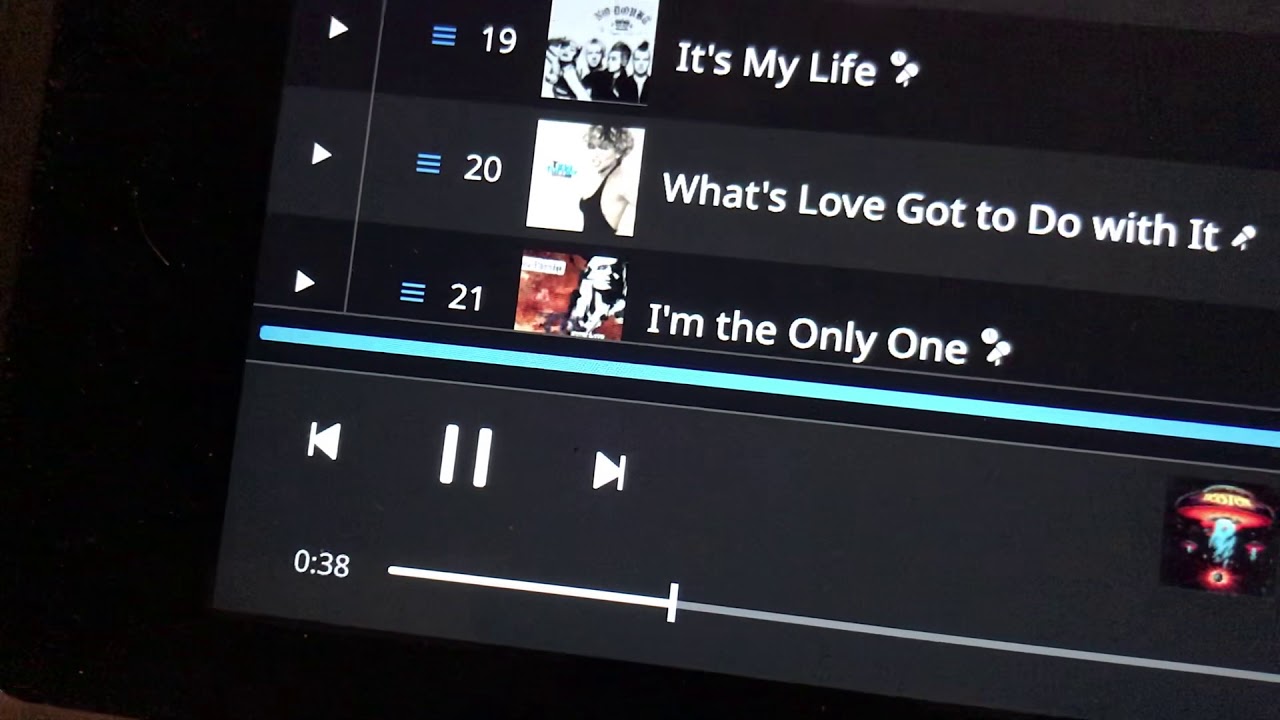 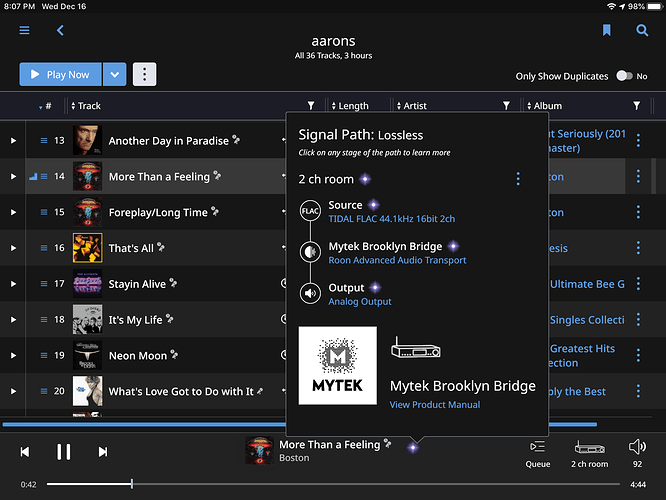 To all who have tried to help me thank you. I believe I have resolved this issue and it was not a roon issue at all. My mytek Brooklyn bridge was due for a firmware update and according to them, had a “known problem” where the songs would play fast or slow due to a bug in the last firmware. To the best of my knowledge it WAS up to date so I’m sorry I wasted anyone’s time trying to help diagnose this problem. As embarrassed as I am, the problem seems to have been resolved…thanks again