Playing albums with 'indexed' tracks as a whole in Radio mode

When I am in my office, working, I like to play music from my own extensive collection like a non-stop radio station. So what I do is select Tracks from the menu, and then Play All/Play Now, which automatically starts the Radio function in shuffle mode.

This is working perfectly most of the time, but recently I noticed that when an album has ‘indexed’ tracks’ instead of individually numbered tracks (e.g. the Black Hawk Down soundtrack by Hans Zimmer, where the metadata simply says 1-15 at the top and the tracks have bullets instead of numbers) Radio plays all the indexed tracks in the original order before it picks a new track from another album. So in case of the Hans Zimmer soundtrack, Radio plays the whole album.

Is there a way around this? An ‘overall’ setting that sees indexed tracks like individually numbered tracks. I would prefer that to telling Roon to use the file’s original metadata added by me. It would be quite a job to seek out all the albums with ‘indexed’ tracks. 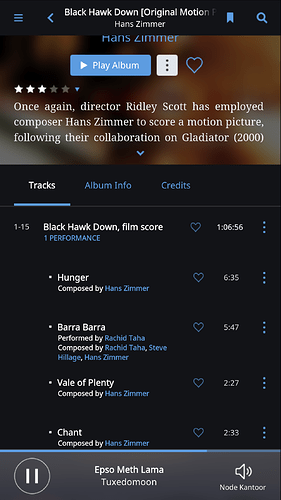 It essentially feels like “radio” playback stops when it hits a part-work. These should be excluded from radio or limited to just one part of the work.