Ethernet wired on a D-link switch 105

I have asked to the support if there was a way to only have the album picture on the playing now view. They informed me about the parameters setting in the top right corner. It’s a good tip but the problem now is How I go back. I don’t see the settings anymore, nowhere, neither in the three dots nor the main page settings. If you have any clue where’s the parameters wheel gone…I would be grateful.
Is there a way in the playing now view to have only the album cover on the black background, without the gray band on the bottom.
I’m hopping to have only the album picture like if it was the album.
Thank you very much.

This is a bug - if you turn all the settings to “off”, then the gearwheel itself disappears so that you can never get back to the settings again. It’s been reported - see this thread:

Core Machine (Operating system/System info/Roon build number) Apple iMac. Network Details (Including networking gear model/manufacturer and if on WiFi/Ethernet) Router is supplied by local provider WiFi and streaming on Ethernet Audio Devices (Specify what device you’re using and its connection type - USB/HDMI/etc.) Bluesound Vault 2i streams via an RME dac 2 into a Hegel 390 description Of Issue When the song is playing I can not see the three icons at the top of the page in the right ha…

Hello, well I’m a little surprise to see that the tech support knew that info and didn’t thought it would be good to inform me about it before telling me about the option… hum
No coming back kind of situation. I would have chosen another path.
I just hope the bug will be fixe some time soon, my love and my mother in law, they love the lyrics view… I’m loosing a lot of points here.
For the other question, à album cover on a black background only? Possible or not ?
Tank you Mr Coupe.

For the other question, à album cover on a black background only? Possible or not ?

No, I’m afraid it is not possible to have only the Album cover displayed on the Now Playing screen without the Playbar and track information. The default is to have both, like this: 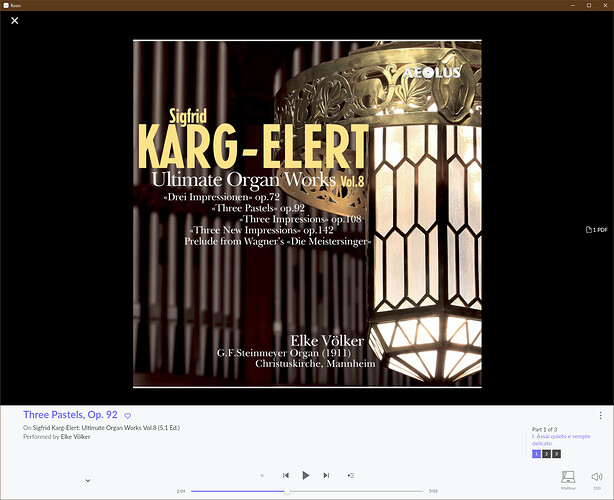 This is the display on a Roon Control device (one that has the user interface).

On a Roon Display device (e.g. a Chromecast Ultra or a web browser), the display will also show the Playbar and track information, with a small Album cover. The rest of the screen is given over to displaying Artist images associated with the currently playing album. As far as I know, this type of Display will not show a larger version of the Album cover - only artist images (if any are available). 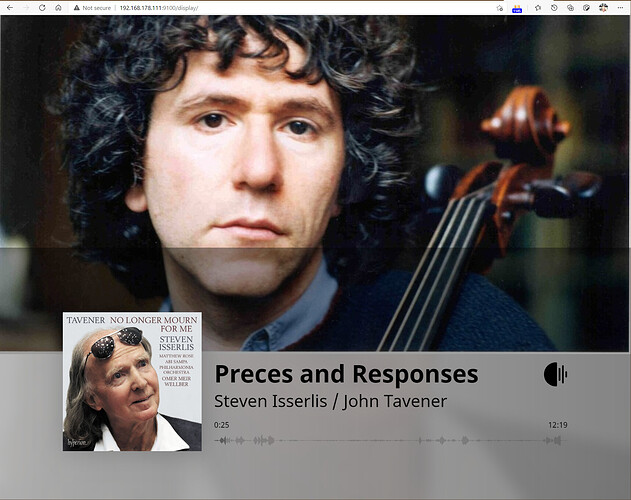 This type of display has a “10-foot” interface, with larger fonts, suitable for TVs viewed at a distance.

Tank you for the explanation M. Coupe
I think it would have been nice to have the option of the Album cover, well will see in the future.
Do you have any idea when they’re supposed to address this bug?
Both of my displays have this issue now… well there is worst thing in this world.
Have a nice day.