I’m slightly bemused by the left hand column in the playlist view, titled #. My playlists appear to have random numberings and I can’t work out the reason why. See the example below, where it jumps from 1 to 99. 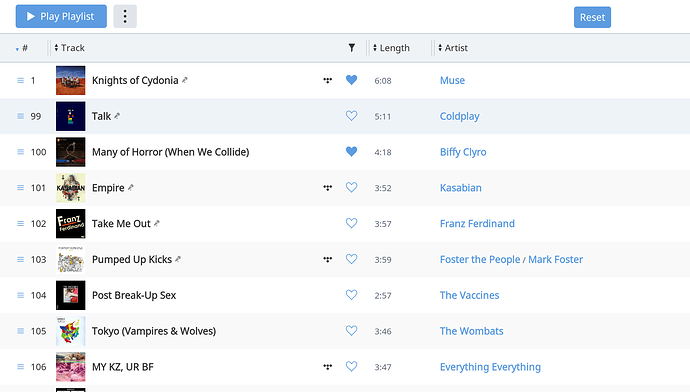 I did wonder if the reset button would help, but not actually sure what it does. No effect on the playlist.

And there is no filter being applied.

If you scroll down, do you see Tracks 2 through 98?

The numbering is similar in my playlists. But I know that the missing track numbers actually correspond to tracks that are missing. At the top of the playlist, for example, it says “13 of 26 tracks, 73 minutes.” Thus, I know that 13 of the tracks I originally put in the playlist are missing. This happened when I changed the location of the hard drive on my network and rescanned the drive and reimported the music. It actually imported all of my albums and tracks, but the playlists were screwed up badly. I’m not missing about half of the tracks in my 50 playlists, which I spent 8 years building. I have a separate thread here that is my own attempt at getting support from Roon: “Problems with Missing Music, Storage, and Importing in 1.3”

Tracks 2-98 are missing, but only from a numbering perspective. There are no missing tracks in reality. There are only 59 tracks in total, even though the playlist appears to believe there should be 158!

Let’s flag @support to have a look at this. 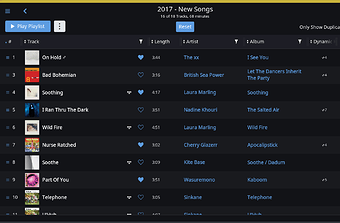 I suspect that I have removed the missing tracks from my library (e.g. Tidal tracks), and that the playlist has not automatically updated completely to reflect the changes. I haven’t hit reset as I’m also not sure what will happen - I don’t want to start again!
Nick

@support: Anything new on this topic?
I have the same problem with my playlists. Tracks missing, list shows f.e. 50 of 56 tracks.
I’m on build 204. No skipped files in settings view

We’re tracking this internally – as soon as QA has reproduced the issue, we’ll get this fixed and scheduled to be released.

Don’t worry – we’re on it, and haven’t forgotten about this

Hey folks, we spent some looking into this and so far we’re not able to reproduce.

Can everyone experiencing this issue let us know:

@thompo @AE67 @Nick_Stamp @alwayslearning – can you guys let me know the answers to these questions and we’ll take another look at this?

Does this happen with all playlists, or just some?

Not all, maybe a third of all playlists

Are you seeing the “reset” button on all playlists, or just the playlists experiencing this issue?

Only on playlists with missing tracks

For the playlists affected by this issue, can you confirm whether:

All my playlists were created with Roon 1.2

Does this happen with all playlists, or just some?

Not all. New ones are fine, just as some of the older ones. About a third are affected.

Are you seeing the “reset” button on all playlists, or just the playlists experiencing this issue?

They are all stored locally to the RoonServer machine, which also contains all the music files

Some mix of the above (please specify)

They have been gradually built up over time, so prior to 1.2 as well. They have all been created in Roon itself.

I created a test playlist of a handful of songs from my library (including tidal content) about a week ago, and I happened to check it this morning, and the numbering issue is now present.

The playlist contained the single ‘Soothing’ by Laura Marling, which I had added to my library from Tidal a few weeks ago. Yesterday, I purchased the new LM album containing this track, and added it to my library. I then deleted the single from my library in the usual way (as it is part of the album and I no longer need it).

The single has been removed from the playlist (presumably from when I deleted it from my library), but the numbering hasn’t updated to reflect the song’s removal.

We have made some progress on this, and we have a general understanding of the issue and how to reproduce it. We are hoping to implement a fix soon, and the ticket is with our developers.

We’ll update everyone as soon as we have a firm ETA on a fix. Thanks for all the details reports, and thanks again for your patience all!

Hi. Is there a fix for that? I’m experienced the same issue!
How can I find with tracks are missing ? !
Maybe it’s because i removed all the TIDAL albums from my Library??!! 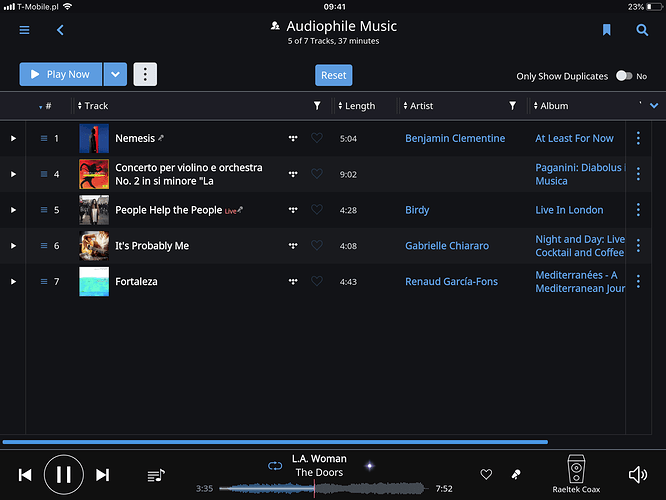